April 18th – 28th: Cairo and cruise “up” the Nile to Luxor, Edfu, and Aswan plus side trip to mind-boggling Abu Simbel. Anything less than 2,500 yrs old now seems “recent”! Coping with the 450C temperatures – have to slow down and go with the flow. Cairo is fascinating but choked with (20M) people and traffic. Camel ride to the Giza pyramids – touristy I know, but a “must do”. Camels are more comfortable than they look! 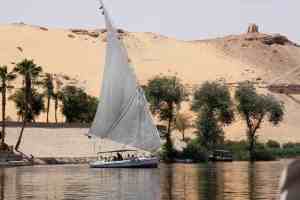 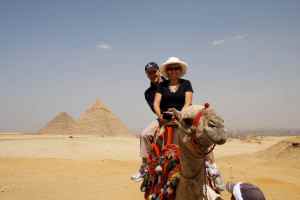 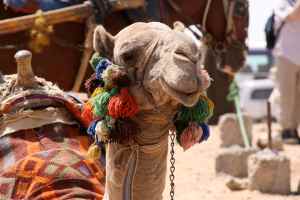 April 28th: Zagreb – a very attractive, vibrant, and cosmopolitan city. It seems the centre is full of yuppies drinking cappuccinos – I wonder who’s out working? Croatian food seems to have improved greatly since our last visit in ’03 (or we’ve gone more upmarket than the local “Y” in our old age).

April 29th: Full day’s drive from Zagreb to Sarajevo, through the Bosnian countryside and small poor-ish towns. Aftermath of war still very obvious especially around border areas with many bombed out, abandoned buildings. Confusing to see many names in Cyrillic script, luckily less prevalent as we approached Sarajevo. Wandered through the delightful old town in Sarajevo (strong Turkish influence apparent) – depressing amount of damage still evident from the war. Hearing and reading more of the war made it hard to imagine the horror of 4 years living daily under siege and negotiating “sniper alley” or simply getting drinking water from the river or cutting down the few remaining trees to light a heating/cooking fire (all power, telecommunications and water cut off for 4 yrs by the Serbs). 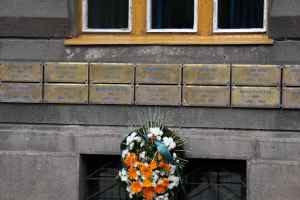 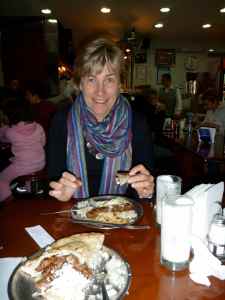 Thurs 30th April: Fascinating tour of the” Tunnel” which had been constructed under the airport runway to connect the city with the thin strip of Bosnian held (free) territory outside beyond the Serbian held territory. This was the only link with the outside world during the 4yr siege of Sarajevo (‘93 – ’95). 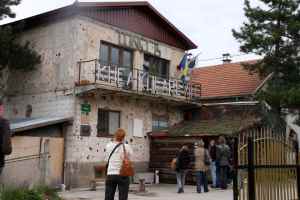 Fri May 1st: Ian’s 55th!! Drove though some spectacular Bosnian countryside, beautiful mountains, lakes and on to Mostar. Separated from a few excess Kuna by a gypsy – guided tour of the old city. Was awfully crowded but the reconstructed ancient bridge (totally and senselessly destroyed by the Serbs during the war) now rebuilt. Arrived at Marina Kremik (back in Croatia – near Primosten) late afternoon, for our first view of Xela (Bavaria 42 Cruiser) – our home for the next 5 mths! Absolutely spotless in true German fashion – spacious and comfortable. Checked into the nearby Hotel Zora in the lovely old town of Primosten for Ian’s birthday. Zora didn’t live up to the brochures – Disney meets Oktoberfest! Full of packaged German family tours, loud music bad taste. Ian’s birthday dinner was a “pig trough” affair (worse than the hospital cafeteria) and very ordinary wine – saved by the birthday cake and candles organised by the barman. 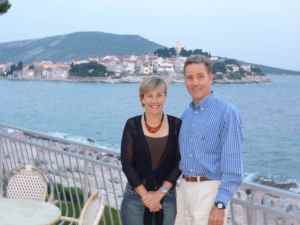 May 2nd – 3rd: Provisioned the boat with what looks like enough food for a family of 6 for a year; return rental car and prepared boat for departure. A lot of stuff still needs to be sourced for 5mth cruise – plan to return after 1 week shakedown cruise to the Kornati Islands (30 miles off the coast). 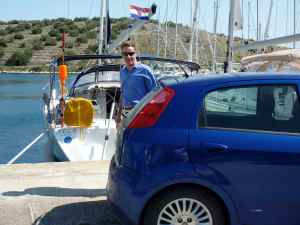 May 4th – May 11th: We’re off – Great to be finally sailing! A little cool still – only shed the long johns yesterday and definitely too cool to swim just yet. Brisk sail north, with fair winds (15-19kts). Xela performing surprisingly well with a “standard” rig which is very easy to manage. Spectacular Krka waterfalls (up the inland waterway from Sibenik) and a small motor boat to the beautiful Visovic monastery on a small, very isolated island above the falls. 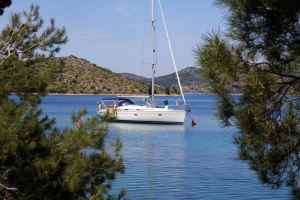 Thursday 7th May: Left mooring in Skradin early for the Kornati Islands. Lovely passage past Sibenik which looked beautiful in the early morning light, made us sorry that we hadn’t visited – maybe in September. Great sail up to the Kornati islands (national park), many other yachts about, nice breeze. 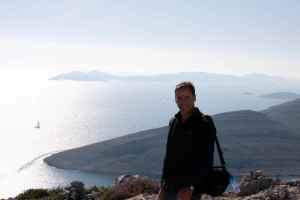 Fri 8th – Sun 10th: Pottering around Kornat Is and Dugi Otok (Telasica Bay*). Highlights included: peace and solitude; sleeping in; smell of pine trees 20 miles off shore; crystal clear turquoise water; finches twittering in the scrub; simultaneous sunset & full moonrise reflected on the water at either end of the boat; walks up to the peaks; the bright blue “Salt lake”; two superb fish feeds at local restaurants; no loud naked Germans (well only a couple). We’ll need to make the most of the isolation and being the only boat anchored in the bay – the Adriatic will be chock-a-block when the ‘season’ warms up. [*parked here with the kids in 2003]. Lowpoints: Decision to do the 7 day shake down cruise before returning via Marina Kremik vindicated as numerous deficiencies discovered: leaking ‘O’ ring on engine cut-off valve; steering post Teflon packing too tight giving very stiff steering and ++ battery drainage on autopilot – boat needs to be lifted out of water to drop rudder out to fix; noisy transmission – needs attention and parts; the absent barometer replaced with non-functioning barometer; no bungs for hull penetrations; still no C-Map card for Aegean; no anchor chain snubber; need extra springer line to slip when bow-to walls; insufficient propane bottles; no dinghy seat; etc, etc….. Navigational deficiencies: no deviation card in a boat in which the compass deviation exceeds magnetic variation; port binnacle compass 80 error rectified by shifting spare anchor stowed adjacent; Tridata out of calibration with GPS and binnacle compass (needs recalibration); log reading 2 kts slow – needs recalibration; Croatian charts do not use the WGS84 datum (in error -3’ longitude). 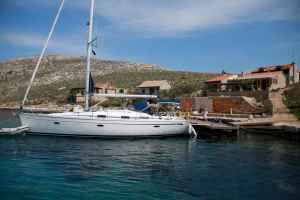 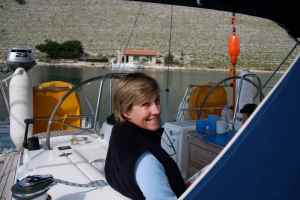 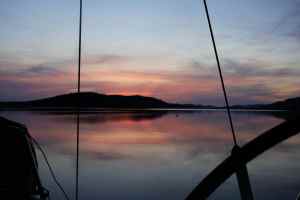 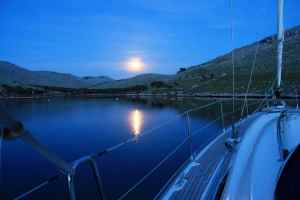 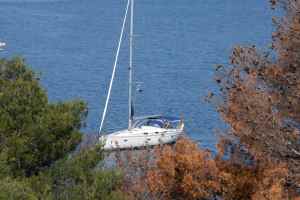 Wed 13th: A new low point today – Leo fixed repaired the transmission, but the damage probably also damaged a major engine bearing. We gave up idea of leaving today and had a great day doing the tourist thing in Trogir – a truly lovely town with a 1246 Romanesque cathedral, great carvings in limestone going back to 13th Century. View from belfry worth the vertiginous climb. Only 2 yachts alongside the promenade – they will be nose to tail and 3 deep in the season – can’t wait! Returned to boat at 4pm. The downside is that the whole engine has to come out and go to Volvo in Zadar to fix the bearing +/- whole gear box! Glad we can do this now rather than in Turkey; the downside is that time is slipping away. The high point of the day was Zoran (Mare Charter) – arranged a cruising “blister” for the season and the appropriate rigging. Even better – he asked do we need charts? Is the Pope a catholic we said!!!!! We can’t buy them for love or money, but he loaned us 30 charts to cover the entire trip to Montenegro, Brindisi, Corinth Canal, all the Greek islands and Turkey (+ Crete if we’re so inclined) – truly a magnificent gesture in a land where charts can NOT be sourced – it truly made my day – I can now sleep at night!