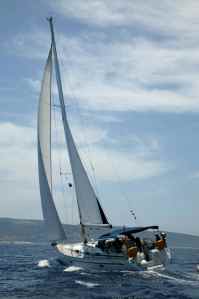 The passage.
Early June: We set off for the long anticipated passage from Bar (Montenegro) to Corfu – bypassing Albania – a 170Nm sail which we estimated would take about 25-30 hours. After waiting in Bar for several days for the strong southerlies to settle down, we at last headed off into a “moderate” southeasterly, which crept up to 22knots. After 8 hours of beating into the wind, rain and nasty, increasing seas, the 1pm weather forecast predicted a south easterly gale. So, with 38Nm under our belt, we had 3 choices: a) push on as far as we could and if it became untenable, seek refuge in Durres on the Albanian coast. This would entail a difficult piece of pilotage on a shallow coast and lee shore – in the dark. b) try and go all the way to Corfu in a gale (? 35-40hrs), or c) Turn back, return to Bar and wait for better conditions. We chose the latter. A very frustrating day; 81Nm sailed in messy sea to arrive back where we started after 13 hrs. 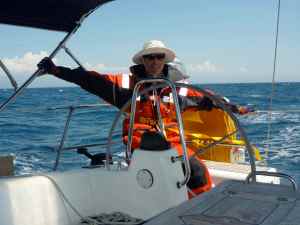 Back in Bar ‘marina’ (not the most salubrious!) we spent the next few days itching to get away; checking weather reports daily and at the local internet café, planning our future travels and sightseeing around Bar.

Passage planning - ?via Brindisi or straight to Corfu

Set off again for Greece four days later; a much different story! No wind warnings, decreasing seas and pleasant NW winds behind us. We passed our ‘point of turning back’ from the aborted passage in a mere 3 hours! We settled into the rhythm of shifts of being on watch, Ian enjoying the sunset off  Albania while I slept. 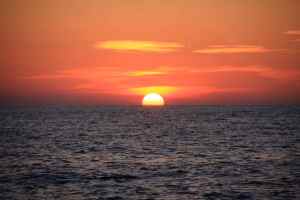 I enjoyed my watch listening to ABC podcasts, while Ian fussed and didn’t sleep much, I think he was too worried about me falling asleep. There was no time for relaxing once we were well down the Albanian coast approaching the narrow gulf between Corfu and Albania. In this region, a large volume of north and southbound shipping converges. At one time Ian counted 6 large ships in view all around us in the dark. Arrived in Gouvia Marina in Corfu at 7am, with a real sense of achievement of having sailed 170Nm in 26 hours without incident! 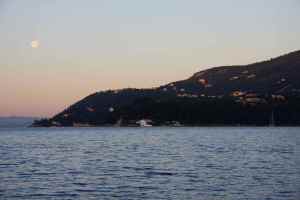 Joined by David and Jenny Harris (in Corfu post medical conference) who were coming on board for a few days to act as our ‘deckies”. Our first taste of the Ionian Islands was Petriti, named “Ettalong by the sea” by Jenny, a bit of a disappointment. Our next few nights at Lakka on Paxos did not disappoint – beautiful clear blue water, a lovely town with great tavernas and enough shops to keep Jen and I occupied for quite a few hours

Emerald Bay on north east coast of Antipaxos was the next stop – a lovely sandy beach with beautiful blue/green, clear water – the reflected light from which coloured green the hulls of boats at anchor. 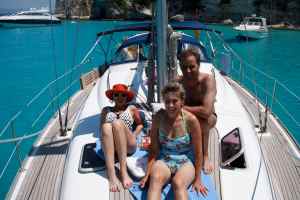 An idyllic day was followed by dinner at a taverna on Mongonissi, Paxos Island.

Spent a few days at Port Atheni on Meganisi Island off Lefkada, a great spot with many unspoilt and isolated anchorages and deep, blue, clear water. Great for lazing around, drinking Mojitos and eating well. Good spot for David who found plenty of running paths throughout the island. 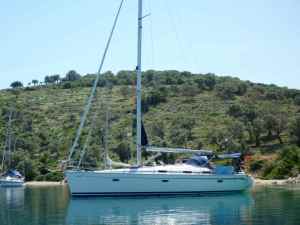 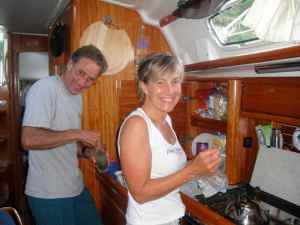 Next move to Sivota Bay, back on Lefkada. We spent an enjoyable few hours watching “Med mooring” where boats drop their anchor in front, and then motor (alarmingly quickly at times) into an almost non –existent space on the town wall. Great potential for crossing anchors, crashing boats, but amazingly it all works! An experience Ian and I are still to try, despite nearly 8 weeks cruising in the Med. Welcomed ashore by Spiros (pic) who tied up our dinghy and invited us for dinner at his restaurant – promising all but the kitchen sink! We obliged and fortunately it was delightful. We moored our dinghy next to one of the Dutch flotilla boats with an original name – who says the Dutch don’t have a sense of humour? 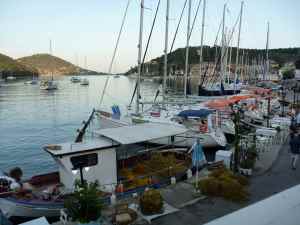 Our last few nights with Jen and David were to be spent on Kefalonia, first stop Fiskardo, a beautiful town, the only town in the Ionian Islands which hadn’t been destroyed in the 1973 earthquake. We anchored with a line ashore amongst the yachts, across the bay from the town wall (full by the time we arrived late afternoon). Swam then went ashore for drinks, dinner and crowd watching in this very beautiful town. 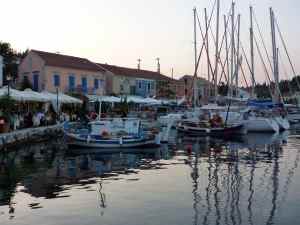 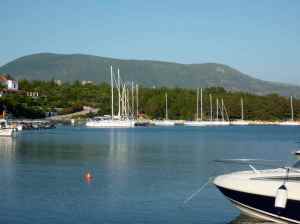 All went to bed thinking how lovely and peaceful life was, with plans of renting a car the following day to look at inland Kefalonia (made famous by the movie Captain Corelli’s Mandolin). The wind came up during the night and around 4am Ian (who had been up numerous times worrying) woke us all to say that although we were still firmly in place, the boat beside us had dragged and was on the rocks. A rather stressful hour or 2 followed. As we tried to move further out into the bay, our anchor windlass failed. Here we were, drifting back onto a rather fancy very large yacht behind us. Luckily David was able to pull up the anchor – thank goodness they were on board! Once the other yacht had been safely pulled off the rocks, we sailed south to Sami, a very sheltered harbour where we managed to get a spot on the town wall where fortunately we had no need for the anchor. We later heard that about 7 of the probably 15 boats around us had dragged during the night.

We farewelled Jenny and David and then spent a few days driving around Kefalonia while the windlass was being looked at. It is a beautiful island we spent a few days although the weather was not great, the sea at Myrtos Beach on the west coast was as blue as we’d been told. Port Assos was also a delight, not the best anchorage, but lovely to experience by car. Finished the day with the mandatory ‘Ionian sunset dinner’ watching the sun disappear into the sea (well almost, there was a house in the way!).

Ian and Andreas (local motor cycle mechanic and former ferry boat engineer) pulled the windlass control box apart and after cleaning the horrible looking points, determined that the windlass motor was the culprit after all. This necessitated us backtracking 30 miles to Lefkas Marina to have our anchor windlass repaired. Arrived in a raging thunderstorm and pouring rain, (we were wondering if this was really Greece after 3 days of unsettled weather). 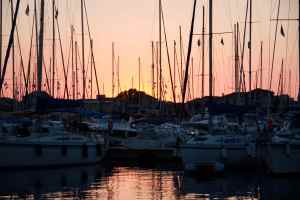 Took the opportunity of being stuck in an expensive marina to leave Xela while we rented a car and toured Lefkada. Like Kefalonia, Lefkada island is mountainous, with a spectacular western shoreline of beautiful white sandy beaches with incredible blue water. The roads of the Ionian islands are a real challenge narrow, winding, and dotted with either goats (Kefalonia) or rocks (Lefkada).

Anchor windless repaired, we sailed (south again) off into the sunset for Spartachori on Messalonghi Island, for a very pleasant last night in the Ionian before heading for the mainland and Gulf of Corinth. It was so lovely, we decided to stay another night, only to be told by the restaurant owner that there would be no room on the dock – a sign of the busy season to come. 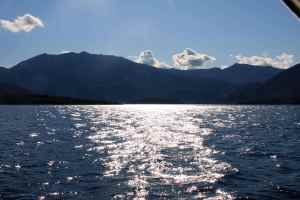 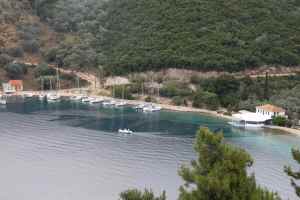 Sailed to Petala on the mainland – very close to the Gulf of Patras, a lovely large but uncrowded bay with scenery pretty much like Aus! Spent 2 days anchored in the bay, doing maintenance, relaxing and reading. Ian learned that if something dangerous needs to be done on the boat, the first mate has to do it (refer photo Cathy up the mast repairing radar reflector!) 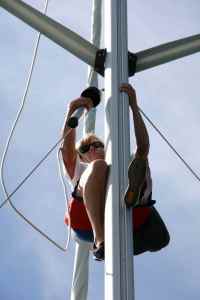 The Ionian Islands were  a lovely surprise; not at all like the rugged barren islands of the Aegean. Instead they were spectacular mountainous, green and heavily forested.

Next phase, off to the Gulfs of Patras and Corinth and on to Athens to meet up with Andrew.