After logging 2,046 nautical miles in 150 days; would we do it all again? Without a doubt! It’s been a steep learning curve with countless novel experiences – mostly pleasurable; some stressful; a small handful somewhat terrifying. Despite the ups and downs, Xela was returned completely unscathed and probably in better shape than when we first boarded her – thanks to the intensive maintenance schedule! We’ve learned a lot – including how much there is yet to learn. We’ve learned to love and respect a good anchor. We’ve learned what we want and don’t want in a boat. Everything is a compromise in finding the ideal boat but we now lean more towards security and reliability over comfort – although there is a limit to that formula! However, there is little doubt that confidence in ones boat is the most important part of a complicated equation. We’ve learned that the Med weather, while generally benign, deserves a healthy respect as it can bite you – sometimes unexpectedly. It can also be very frustrating for the sailor (ie too much or none at all at times). August is to be avoided if possible – May and September were our favourite months (despite the somewhat more unsettled weather). Next time we’d park the boat and find a quiet place (if it exists in Europe) to escape the August madness and charter boat circus. We’ll certainly be back for more – the Eastern Aegean and Turkey are next on our list – hopefully sooner rather than later. 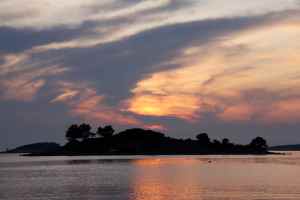