Having a scheduled canal transit date of 15th February, with high winds and seas precluding a windward passage back for another look at the San Blas Islands and little hope of transiting earlier, we headed north on a road trip exploring inland Panama. Our planned few days hiking in the small hill town of Santa Fe was cut short after one day when we “got the call” to transit in within 48hrs. The only thing predictable about Panama is that nothing is predictable and expect the unexpected! … but we weren’t complaining!

So we left the very pleasant Coffee Mountain Inn scampered back the 300+km to Shelter Bay Marina for a last minute shop (yes – even more provisioning), boat clean, stowing of goodies and most importantly, to find line handlers for our canal transit.  We were delighted when JoAnne and Bill (both qualified commercial captains) from SY Ultra, stepped up to the plate. We were very fortunate to secure their help – both great fun with wicked sense of humour and experienced hands. This would be their 3rd canal transit.

Delays and change of plan were very common throughout the transit. We left later than scheduled from ‘The Flats’ the anchorage just outside the start of the canal. Apart from the 3 yachts transiting, the only other boat in the choppy, windy anchorage (25-30knots) was the one below.

Ivan, our ‘advisor’ boarded us at the Flats for the transit from Colon to Gatun Lake. We passed under the new bridge which will soon connect the Shelter Bay marina side of the bay with Colon, avoiding the car ferries and water taxis which are now used to cross this busy stretch of water. 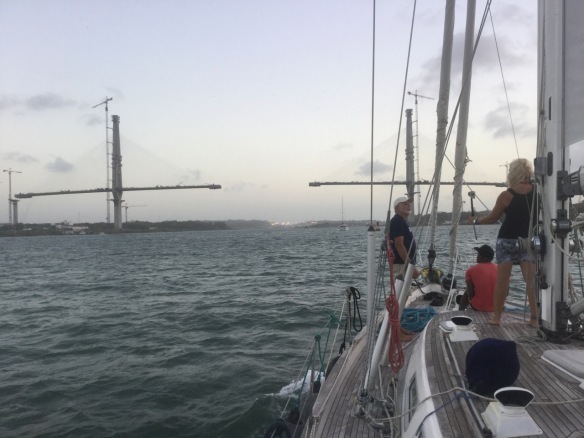 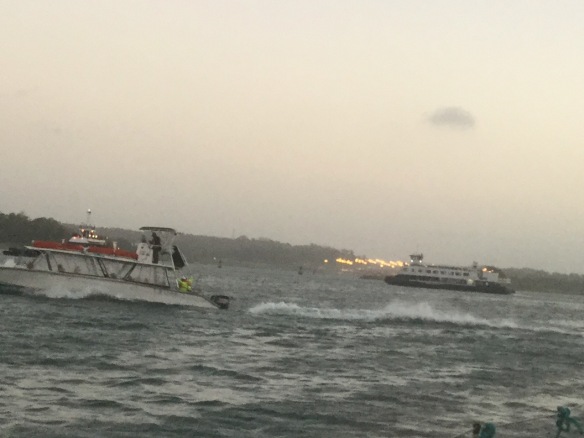 This first stretch of 3 locks up to Gatun Lake was done in the dark. Once close to the locks, we were rafted up to our friends on SY Panache, a Canadian 48′ Catamaran whome we got to know in Shelter Bay.  Manoeuvring the rafted boats with a 15-20kt tail wind required intense concentration and coordination a among the skippers to avoid passing ships in the channel – especially when we were rafted together. Following the large tanker into the lock then maintaining position with the tail wind and turbulence was the next challenge. Every step of the way was a totally new experience! 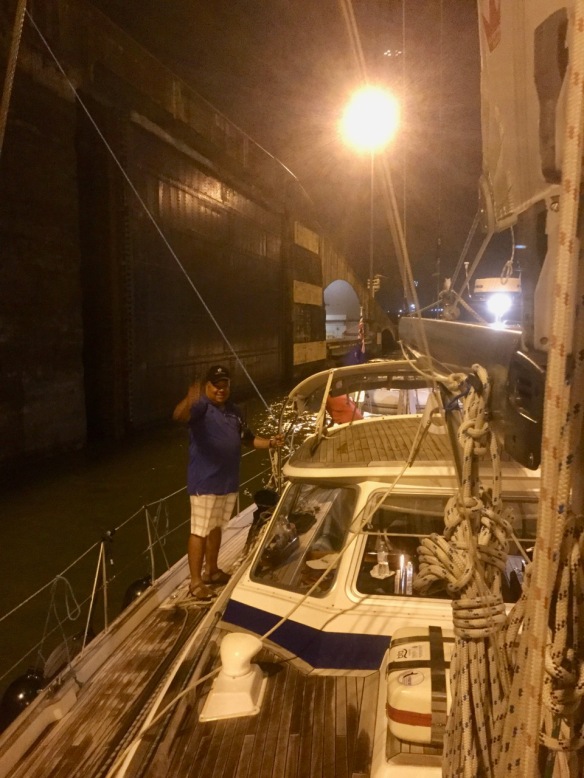 The line handlers are incredibly important, dropping a line can rapidly deteriorate into the rafted yachts spinning around out of control and a high probability of hitting the very unforgiving lock sides.

Once the boat is secured the large lock doors close and the locks fill. 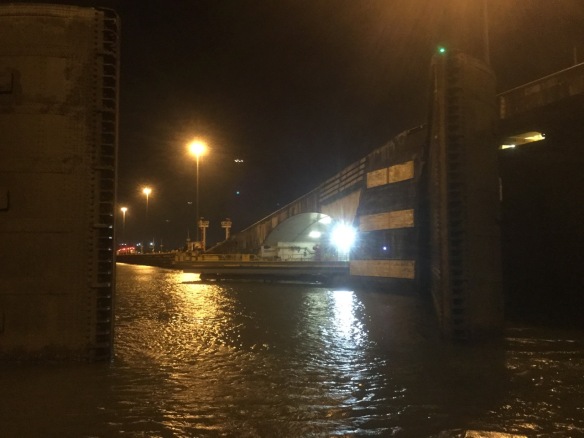 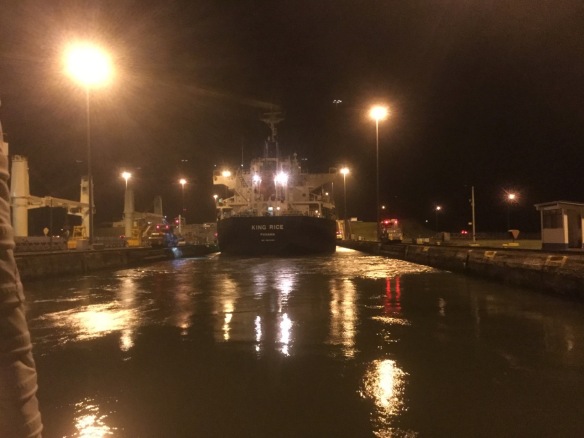 Once the lock is filled, the linesman on the shore pull us into the next lock (there are 3 here) and the process is repeated.

Exiting the locks at about 9.30pm, we tied up on a mooring in Gatun lake, ready to repeat the process the following day.

After a leisurely breakfast, our advisors arrived. We were very privileged to have one of the first female trainee advisors for our transit. 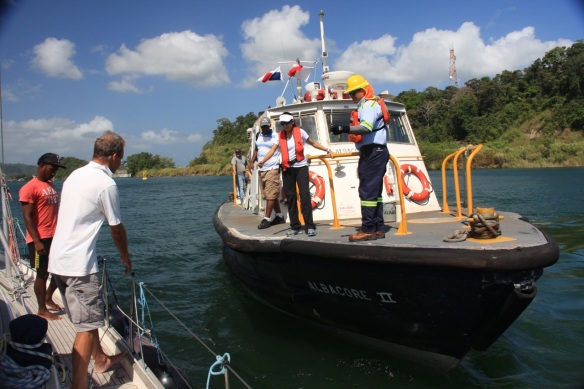 She was very conscientious and pleasant. She should do well, as she even managed to stand up to Ian. Not an easy task for a young woman.

We were very lucky to have a beautiful day and to transit in the daylight. Below is the Culebra Cut, the most difficult part in the construction of the canal.

Once we had tied up in the lock we could relax for a while. Well, until the big guy started moving towards us. 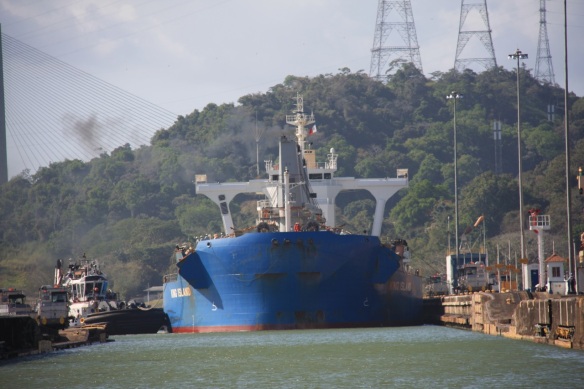 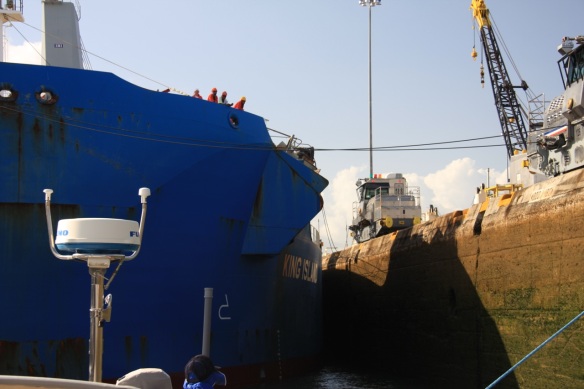 Bill thought he looked a little too close.. 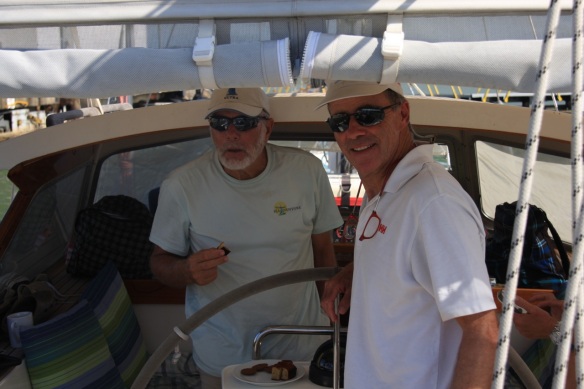 I guess its all in a days work for these guys. 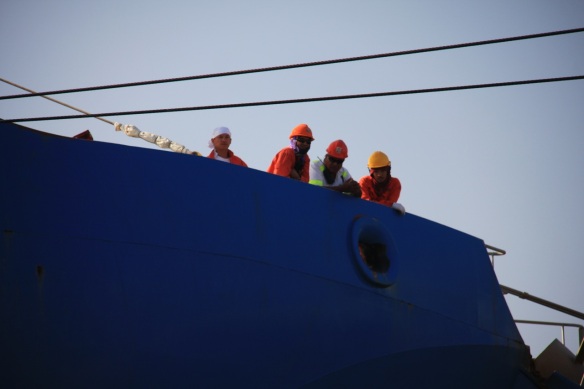 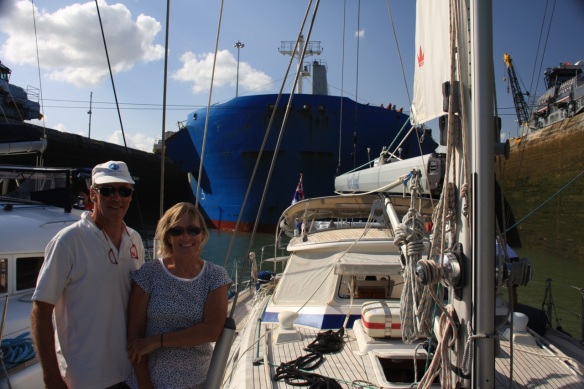 The closer we were to the Pacific, the more excited we became. Miraflores lock with its webcam caused the most excitement as our friends at Shelter Bay Marina were relaying their photos to us. Sea Cloud and Beachlands (NZ cat) really do look like toy boats in front of the big fella.

The doors of the last lock opened and we were finally in the Pacific. The turbulence in the lock and the size of the ship behind us meant that speed out of the lock was crucial. 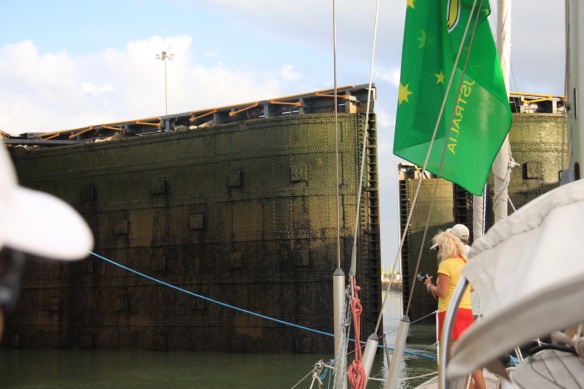 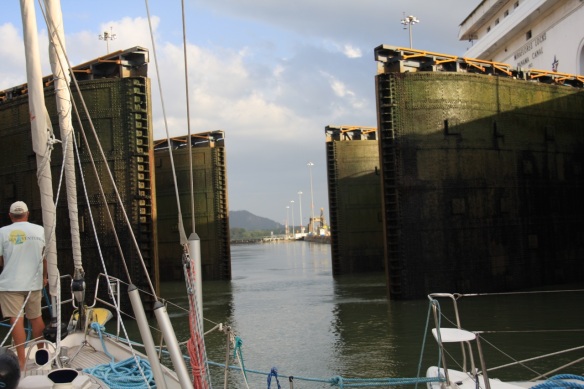 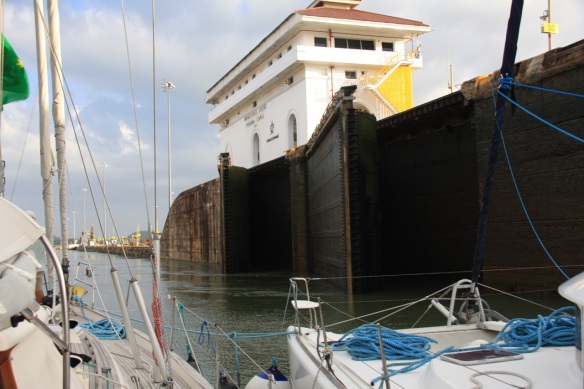 Bridge of the Americas ahead, we were now in the Pacific Ocean, only 7500Nm from Australia!

We are now moored off Balboa Yacht club, a great base close to Panama city. Our visit is perfectly timed to enjoy Panama’s annual Carnivale! Never a dull moment here with ships, water taxis, pilot boats constantly passing. When it’s too bumpy at anchor we retreat to the very pleasant Balboa Yacht club.