Our checkin to Galapagos went smoothly. Eight officials boarded our boat, the diver went down to check the bottom, cupboards were opened, foodstuff and safety gear checked, forms signed, money paid and Sea Cloud and crew were cleared to stay for 60 days in Galapagos. We used water taxis in and out of town as there is nowhere to put your dinghy. We wouldn’t want to leave one here anyway as it would quickly become a bed for one of the many resident sea lions.

We were welcomed by a few pups sitting on the end of the jetty. They are so cute and there are so many of them playing in the ‘creche’ pond. You never tire of their antics. 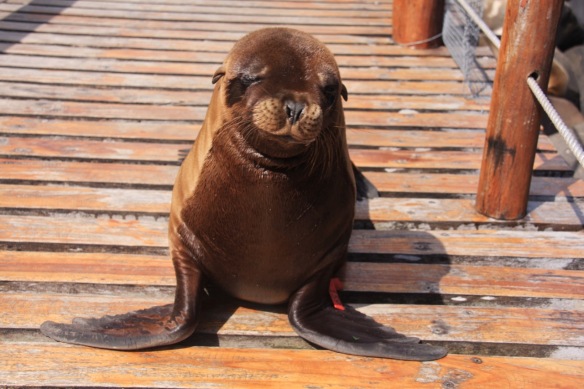 Sea Cloud’s bottom step was a comfortable spot for this sea lion pup. 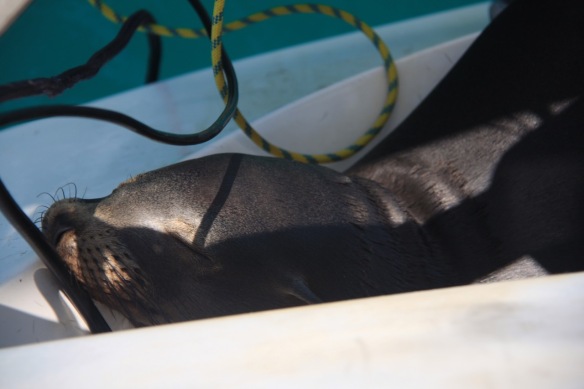 Monique and Dick from Umnyama had been here for a few days, so filled us in on their favourite spots. Sea lions loved sleeping on their transom. They were happy to have them there, but not so happy when they realised one had slept overnight on their cockpit table!

Our first walk took us to the magical Tijeretas Cove, which very quickly became our favourite spot. Snorkelling with the playful sea lion pups was very special. They are so unafraid, and obviously don’t know about the park rule of keeping 2m between humans and wildlife. Their cheeky face would come right up to your mask, then they’d dart below you. The more we tumbled, the more they copied. So much fun. The bay was different each time we visited, we saw sea lions and pelicans feeding on huge balls of small fish. We also saw rays, turtles, iguanas blue footed boobies as well as many colourful fish.

Our other favourite spot was La Loberia, a surf beach on the southern cove. The cliffs beyond the beach was a wonderful spot for viewing nesting swallow tailed gulls, watching blue footed boobies fishing, frigate birds swooping and the elegant red billed tropic bird. 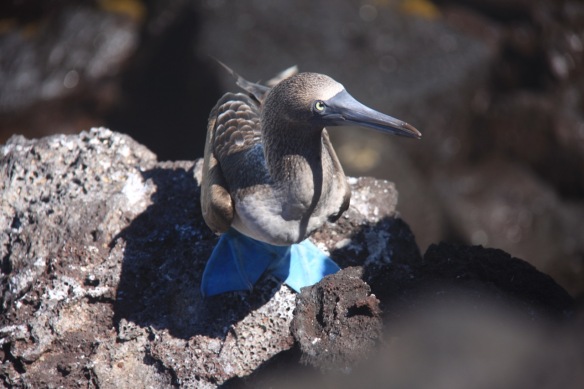 You had to take care not to tread on the marine iguanas on the footpaths. They blend in so well to the dark lava.

A tour across the island to climb the extinct volcano and to visit the giant tortoise breeding centre.

San Cristobal town is small, laid back and friendly. There are sea lions everywhere along the beachfront and town dock.