You’ve probably never heard of a big fat high (BFH). Neither had we – but this somewhat unusual weather pattern was to create near ideal conditions for us during the potentially tough passage south between Tonga and New Zealand. While the low latitude circumnavigation (trade wind) route has been nick named the “coconut milk run” conditions west of French Poly can be affected to a significant degree by systems developing to the south. Indeed between Bora Bora and Tonga, we had already encountered enhanced trades due to the “squeeze effect” as these systems abut the trade wind belt accelerating winds and building southerly swells. They say if “the (high) pressure is over 30, the weather gets dirty”. Many seasoned circumnavigators frequently report their toughest conditions in the stretch heading south to New Zealand from Tonga or Fiji. So, it was with some apprehension that we and many other sailors fill the Wifi cafes each day in Neiafu Harbour anxiously poring over computer generated weather forecasts, and wind/wave models (GRIB files), reading MetBob’s* weekly forecast and tuning in each morning to the knowledgeable David Spillane’s daily weather rundown on Gulf Harbour Radio (SSB 8.752 MHz; www.ghradio.co.nz)

*Bob McDavett ,the Kiwi weather guru and router whom we used for voyage planning. 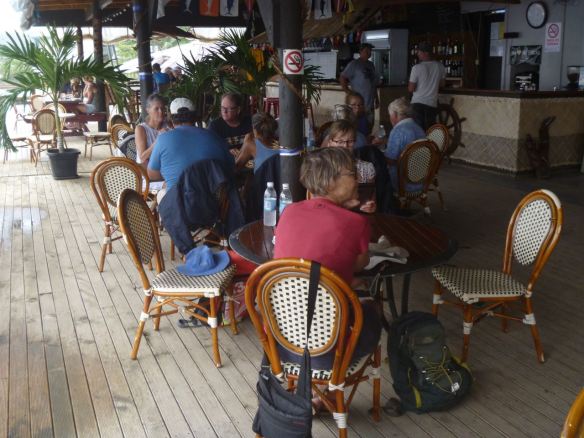 After the check out formalities, we rafted up 3 deep in Neiafu to top with duty free fuel delivered to the main dock by tanker.

This harbour, also called Refuge Bay for its all round protection, turned gusty and grey in pouring rain with white caps scudding across the water while Meteo Tonga issued a strong wind and damaging swell warning – a nice little morale booster as we were committed to sail 1,200 miles south to NZ. 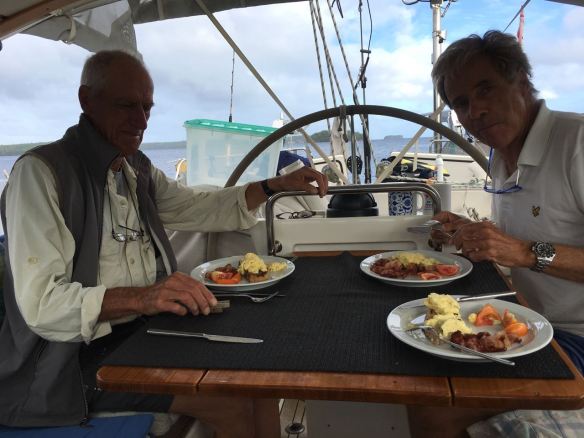 As predicted by David & Patricia (Gulf Harbour Radio,) we did have “sporty” conditions the first 3 days heading south from Tonga but no major surprises nor easterly moving depressions or fronts that can frequently come in from the west.

Alex in his element

Fortunately, the winds averaged only 20-25 knots with 2-3m, somewhat confused, beam seas but the predicted 3.9m seas did not eventuate. Although uncomfortable, Sea Cloud performed admirably, slicing though the seas with triple reefed main, double reefed genoa doing 8+ knots much of the time. What great sailing – posting daily averages of 180Nm for the first 3 days.

After day 3 the seas and winds subsided to 18-22kts and, with a full moon, even the night shifts were a delight. With Alex and Diana (formerly SY Enki; HR48) on board, we all had plenty of sleep and quickly settled into the rhythm of the passage and daily routines as the daylight hours lengthened rapidly. We couldn’t have asked for better crew than Alex and Diana who unhesitatingly accepted when we first invited them to join us on the passages between French Poly and NZ. They have countless sea miles under their belts, most of them in SY Enki, an identical HR48, and they are unbeatable scrabble players – so they were right at home on Sea Cloud. Diana is a great cook and Alex is superb at cleaning up.

As we head south we are working our way through all our fresh food to leave as little as possible to surrender to NZ Customs. Those wonderful pamplemoose (grapefruit); bananas, papaya and pineapples will be sorely missed; as will the plentiful fresh fish which filled our freezer. 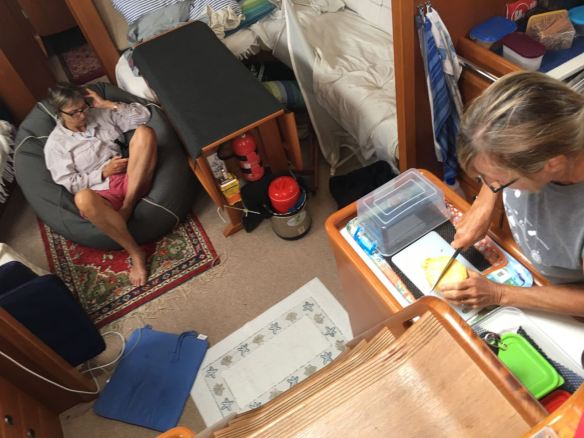 The water and air temperatures also plummeted. It was the first time we’d been in winter woollies, sea boots and wet weather gear on Sea Cloud for a very long time. 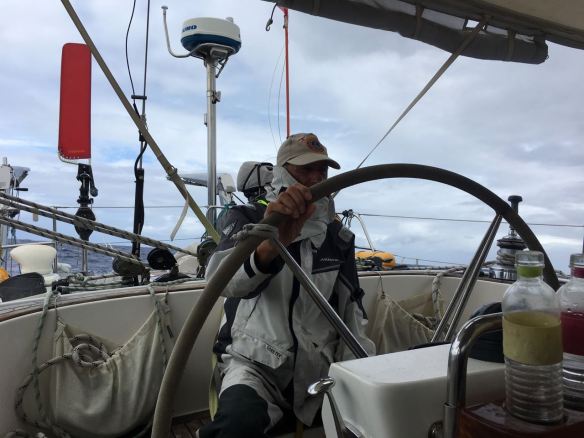 Ian hung on desperately to his tropical gear while Alex dressed appropriately for the “subtropical” conditions.

Ian kept in touch the daily informal SSB radio net with a small flock of about 5 boats within a radius of about 300 miles. He also logged into the larger SOPAC SSB net (8.137MHz) daily which connected a greater number of yachts within a radius of 1,000 miles, en route to either Australia or New Zealand. This was useful getting actual wind and sea observations ahead of us to reconcile with our GRIB files. Although we only saw one other yacht throughout the passage, there were a lot of us out there. During the following week, 200 yachts arrived in Opua many trying to get south before the official start of the cyclone season (1st Nov) and taking full advantage of the BFH. 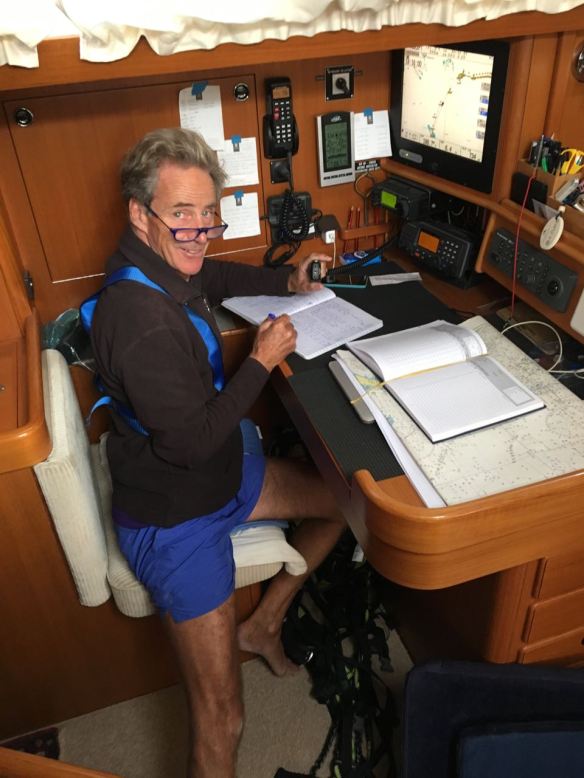 The weather settled as predicted. We had beautiful sailing on calmer seas, a full moon and very pleasant weather. It was calm enough to do some boat jobs, work and sewing. 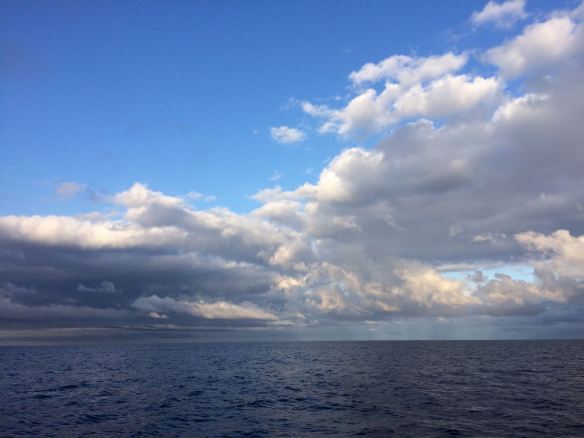 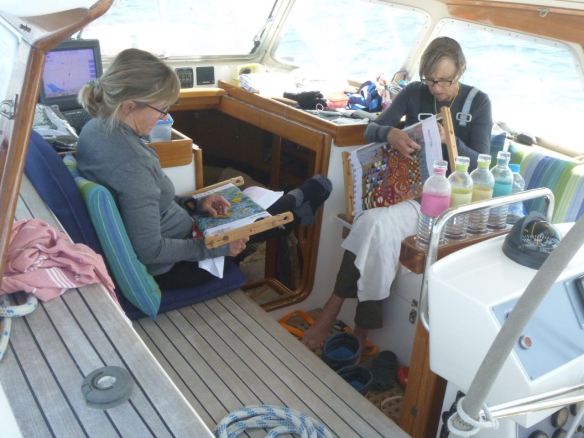 We were welcomed into NZ territorial waters by the Navy Orion aircraft.

Land Ho! The green hills of the northern cape of NZ were a very welcome sight after 7 days at sea. Even more pleasing, we’d arrived 2 days ahead of the expected incoming low pressure approaching the North Island. 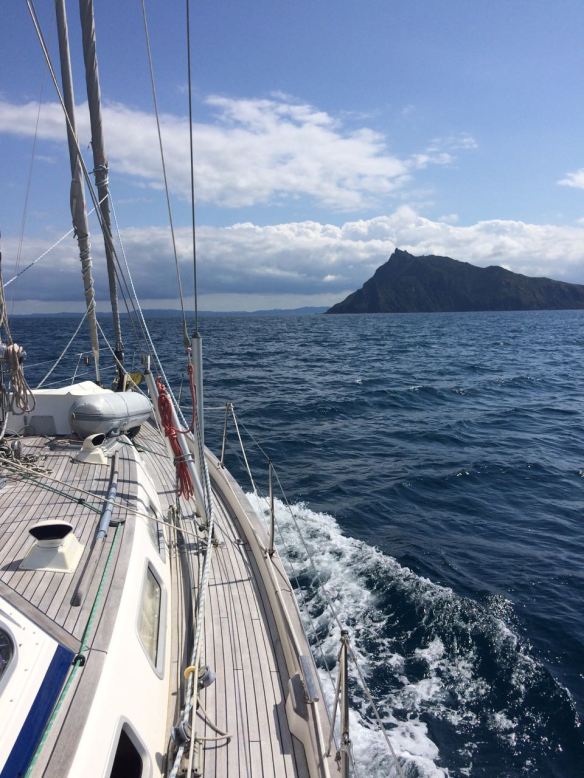 What we’d thought was a black and white navigational aid as we approached Whangarei was in fact a training F-50 (foiling cat). The chase boats had difficulty keeping up what we estimated as a speed of about 35knots in only 12knots of breeze.

Safely berthed in Marsden Cove Marina, Whangarei it was time for a cold beer and celebratory glass of bubbly and fois gras while watching the glorious sunset and looking forward to a night of sleep in a non-moving bed. 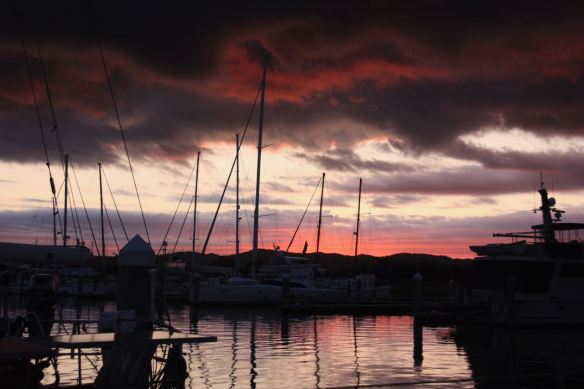 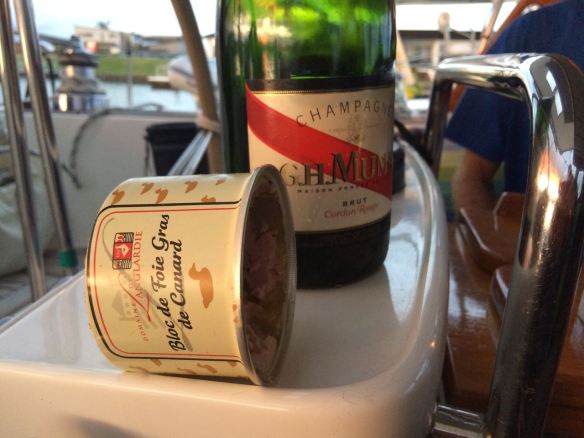 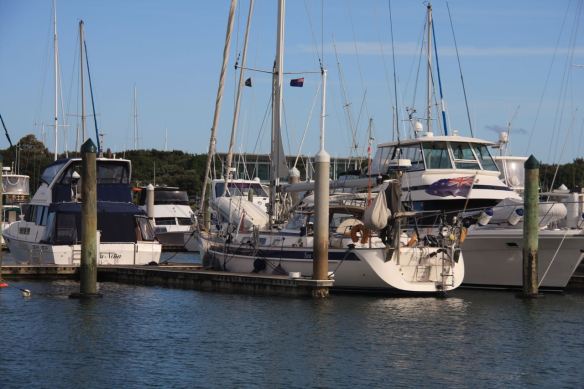 So good to be in beautiful New Zealand. We took advantage of the last of the fine weather brought by the BFH to explore the Whangarei town and environs. 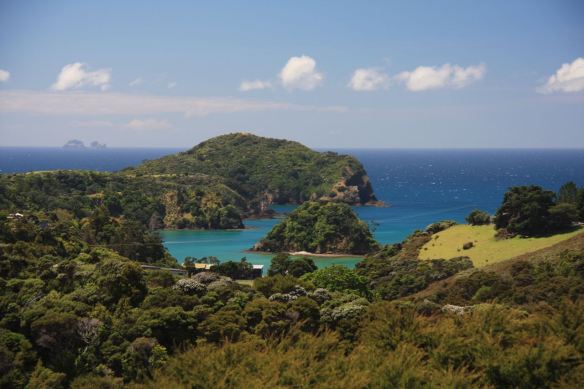 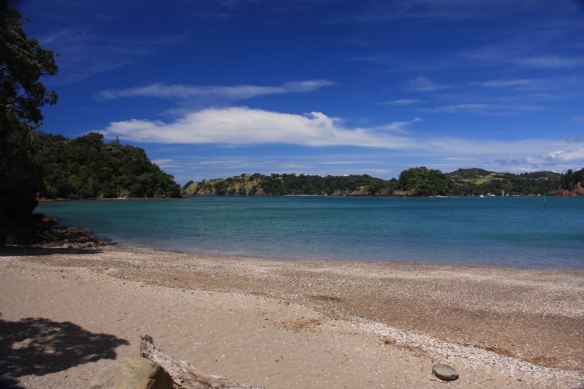 We couldn’t have asked for better crew than Diana and Alex.

Sea Cloud was hauled out Port Whangarei Marine Centre for some maintenance. We had just made it in time, the day after lifting we had 49knots through the yard. The BFH had moved on, making way for the usual system of lows to cross NZ. 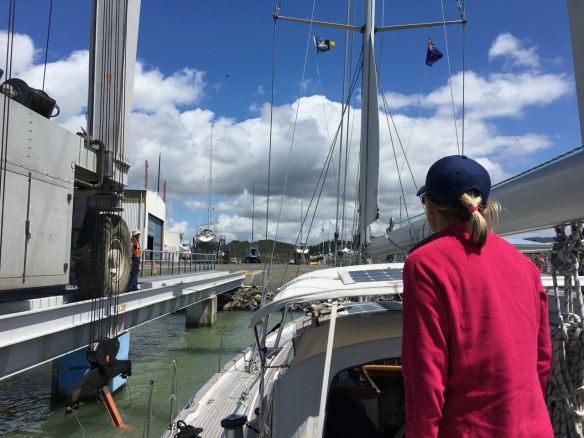