Wishing to get well north before the Meltemi sets in, we hadn’t planned to spend  more than a day or two in Kalymnos. A broken alternator bracket, shattered adjacent pieces of alloy, sheered bolts and a disabled engine changed all that! The next 2 weeks in Kalymnos sorting parts and repairs gave us a very personal insight into Kalymnos, its generous and hospitable people and, at the same time, restored our faith in human nature. There are many people to whom we owe heartfelt thanks.

Iannos (harbourmaster; mob: +30 6944816743) swung into action on our arrival and interrupted his dinner at 9pm to assist our relocation to a safer part of the harbour as a SE blow was imminent. He monitored our circumstances and repairs throughout.

Ioannis introduced us to a superb mechanic, Bayramis Mices  (Mob: +30 6936826268) who dropped everything to assess the damage that first night and got to work on the problem the next morning. Bayramis enlisted the help of his brother Manoli to provide an extra mind and pair of hands when needed while Ian acted as general gofer, helper and sourced parts from the UK.

Manoli coaxed out the sheered bolt form the engine block after due preparation and care (with a hail Mary just in case!) with finesse that would put many orthopaedic surgeons to shame. We adapted to Bayramis’s work hours and got use to the site of he and Ian lying on the cabin sole at 8pm with bottoms up and heads down in the bilge with lights, mirrors and spanners! It was a slow, difficult and frustrating job requiring lateral thinking and jacking up the engine off its mounts to remove the broken bits – a full day’s work. While waiting for new parts to arrive from the UK (Paul Jenkins at Volspec very generous with his time and sourcing precise parts), Cathy did some internet research to source clippers to shear Manoli’s 800 goats! Thinking that was the least we could do for him after his masterful removal of the sheared engine bolt, we were taken by surprise when he arrived the next day bearing gifts – lovely (famous Kalymnos) sponges and a large bag of fresh apricots from his trees. 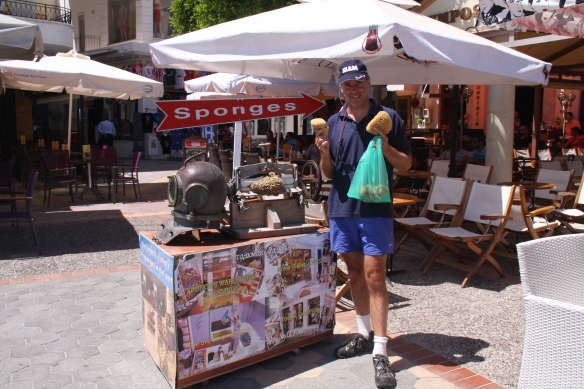 George Hatzisimalis  from the Tourist Office near the port  was also very helpful and generous with his time and acted as liaison person and destination for parts arriving by air freight from UK and France. George was also provided a lot of information about local sites and things to do in the interim. 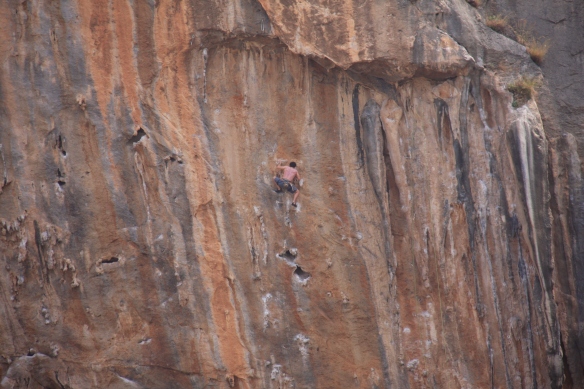 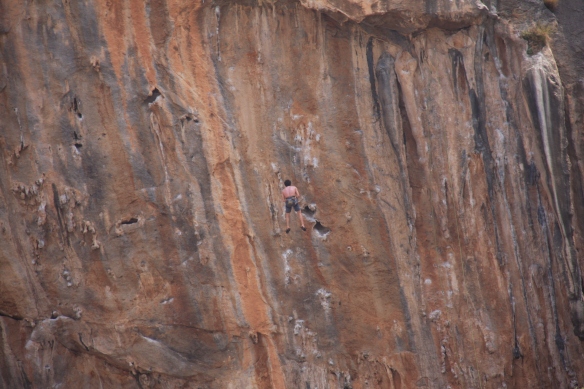 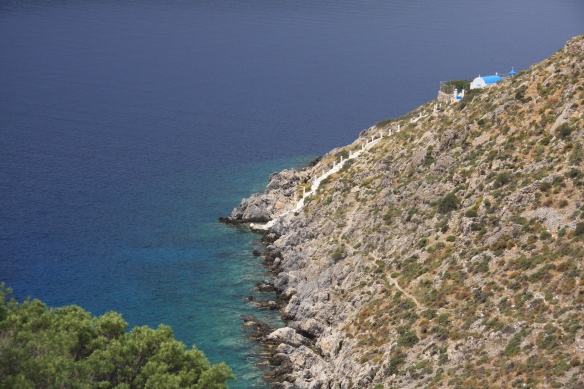 Babi and Diana (Babi’s Bar and Grill, Myrties) were also very kind and extended us typical Kalymnian hospitality. We spent a marvellous evening with their guests and danced the night away in traditional style. Diana originating in Australia means that Babi’s stages a hugely popular Babi’s BBQ every Sunday evening (on a genuine Aussie barbie from Bunnings!). Unfortunately we didn’t get to try Babi’s breakfast which is legendary throughout the eastern Aegean! 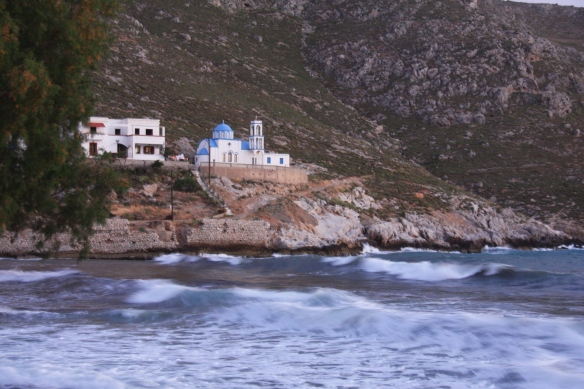 For most of our 2 weeks stay, Sea Cloud was alone in this part of the harbour – a very central, albeit noisy spot.

Surprisingly, it was a great fishing spot, with the man in the striped shirt bringing in fish this size a few times each day. 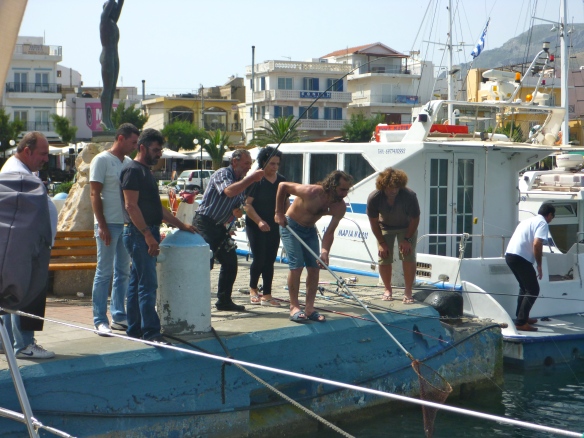 As well as sightseeing, we spent time doing maintenance on Sea Cloud, and ourselves. While Ian fixed the watermaker, I visited Club Mode in Pothia (Kalymnos main town) for a Greek hair style! 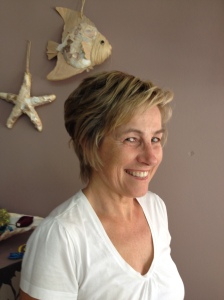 Another two days of parts installation by Bayramis and we have a functioning engine – just before another predicted force 8 SE blow. On our day of departure, Bayramis arrives to check engine trials went well. He also arrives with a gift – a to die for Kalymnian desert pie! We sat for some time chatting about the future of Kalymnos, Bayramis’s family and future plans and assisted him with some ideas as to how his son could get him connected to the internet to source parts. In fact it took a very long time to get him to come around to talk about his (very modest) bill for his hard work!

We had arrived in Kalymnos thinking we’d be “stuck” for 2 weeks. Instead we departed with some sadness after a most fulfilling visit and with our faith in human nature restored.

1 thought on “Kalymnos – Be thankful for “Greeks bearing gifts””