With Sea Cloud up and running again, we left Kalymnos, keen to get as far north as possible before the Meltemi, (strong prevailing, northerly, summer wind) sets in. We planned to get to Thassos, about 400 nautical miles north of Kalymnos, with quite long legs between the islands.

The North Aegean Islands are quite different to islands south and central with fewer tourists and only a handful of other yachts at this time of year. Of course the strong Turkish and in parts, Italian influence on the islands’ architecture is apparent. With plenty of bays in which to anchor, and by and large, good winds it is a sailor’s paradise. Food is cheap and fish more plentiful than in other parts of Greece.

Dropping anchor in the isolated bay of Fimaina off Fourni, we were surprised to hear “Hey Sea Cloud” in Diana’s Aussie accent from across the bay. She had brought her group of painters up from Kalymnos to sketch the sites. We took her excellent advice and had our annual dose of (Aegean) lobster that evening in the charming nearby village (with its sophisticated modes of transport) – superb! 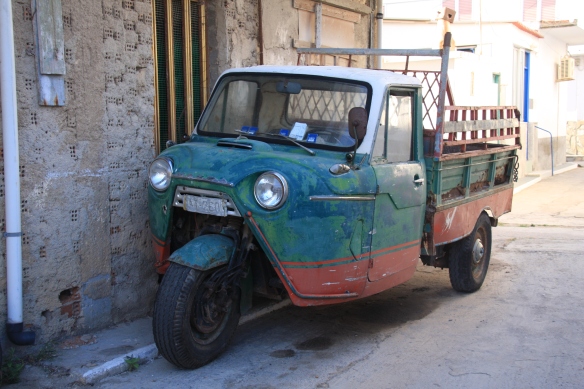 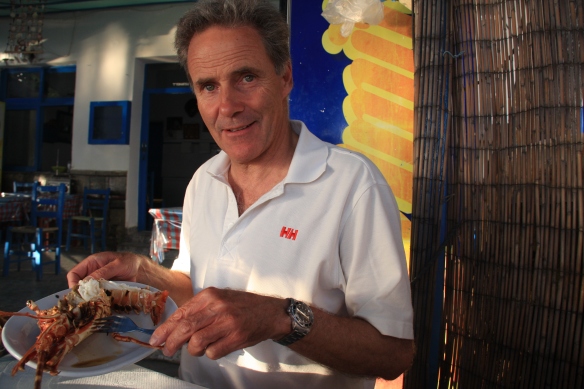 Once we got over the angst of our berthing in a 24kt southerly cross wind against an unforgiving jagged concrete wall in the EU-funded, but typically unfinished Chios ‘marina’ we enjoyed this picturesque and friendly island. 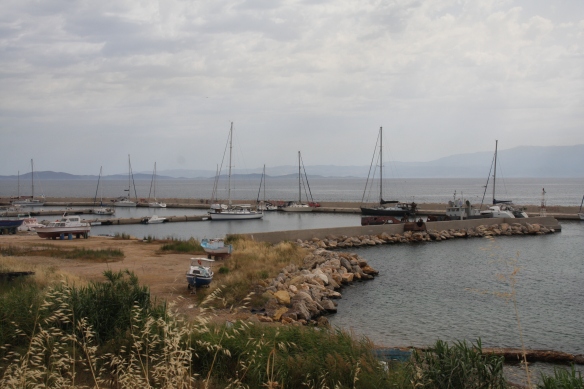 Chios is famous for its mastic – a tree resin used to make everything from gums, alcoholic drinks, sweets and cosmetics.

Chios also has a number of charming small towns, and beautiful swimming bays. The decorated houses in Pyrgi look as though they have been there for centuries, but most are quite recent. 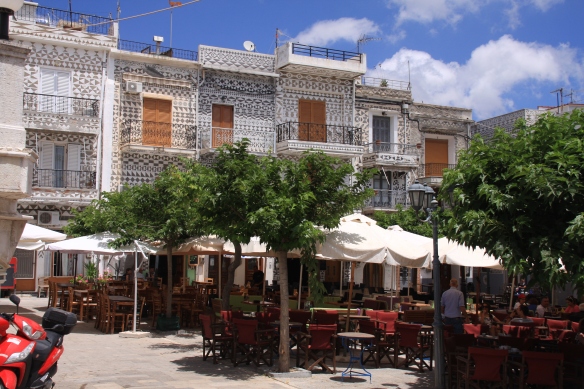 It is easy to get lost within the fortified medieval town of Mesta with its very narrow passageways and small, I suspect extremely dark houses and a surprisingly elaborate church. 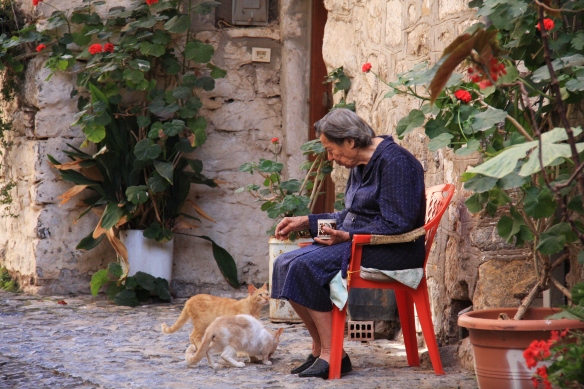 Nea Moni, a fortified monastery first built in the 11th century, once housed 400 monks – isolated and serene, typical of Greek monastries, high in the hills above Chios town. The fires which had ravaged great portions of Chios last year had come disturbingly close to this lovely place.

Very pleased to depart the uninspiring Chios “marina” we dropped anchor behind the small island of Oinoussa just off the northern tip of Chios. 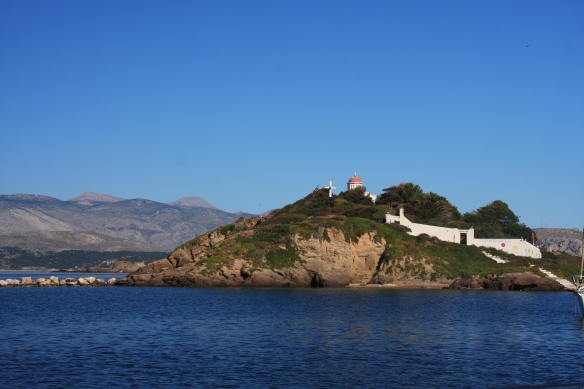 With favourable southerly winds and a good sail north to Lesvos we initially anchored in Plomarion, a small town on the southern coast, famous for its ouzo – the best the Aegean has to offer. What we didn’t realise, it was also famous for its production of olive oil soap in the 19th century. According to the locals, the soap was so good that Ataturk organised one of the local soap makers to move to Turkey. Now all of the soap sold in this part of Greece (labelled as local) is actually made in Turkey. 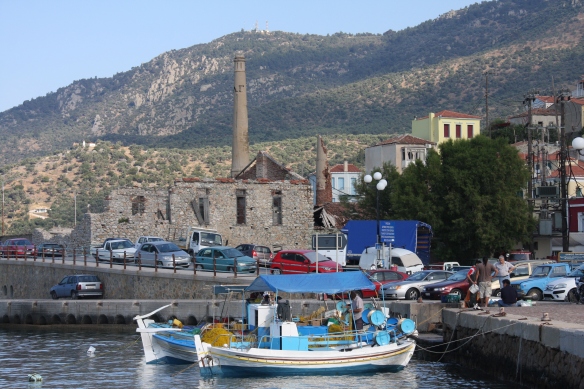 Moored behind Alex and Diana on Enki II in Lesvos  marina in Mytiline – 2 HR 48’s with Australian flags side by side – you don’t see that too often. We spent an enjoyable day in their company albeit exchanging stories about engine woes as Enki still trying to sort theirs out. 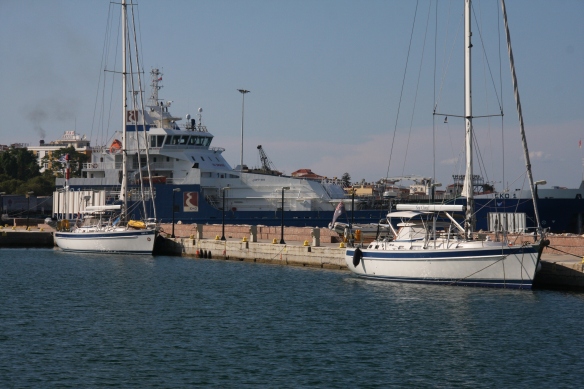 Molivos harbour at the north eastern tip of Lesvos was  surprisingly quiet and one of the most pleasant small fishing harbours encountered this season. Good shelter and spectacular views to and from the castle overlooking the village. Source of superb local produce (eg famous olive oil) and one can even find a great mojito here!

With strong northerly winds predicted in a few days time, we left Lesvos expecting to do some work but lucked out with a brisk southerly (not predicted) for most of our sail north to Limnos. Myrina harbour was a great place to settle into for 4 days of strong wind, rain and thunderstorms (is this really June in  Greece??). Rather than anchor in small bays as we had planned instead we explored the island by car. Limnos has a wonderful small archaeological museum in Myrina – great to visit before seeing the source of its contents – the Poliochni, site (3,500 – 1,400 BC).

Visited the Commonwealth war graves at Moudros, adjacent to the large natural harbour that housed the Allied Fleet in 1915 during the Dardanelles campaign.

We were very lucky to meet Andrew and Mary, Aussie-Greeks who spend 3 months a year in Mirina, the rest of the year in Sydney. They very kindly invited us over to share a dinner of Andrew’s wonderful stuffed tomatoes and to sample the local ouzo Tsipouro. 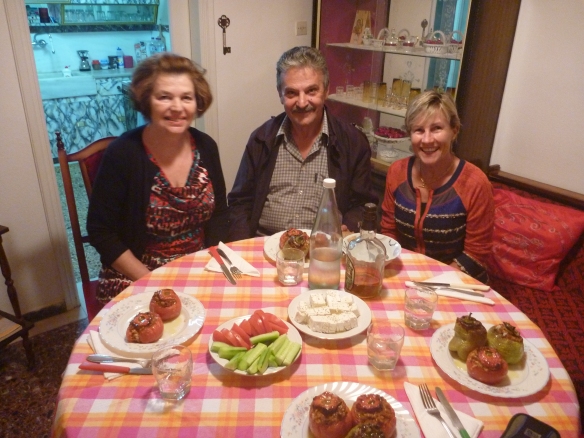 With the emergence of the sun, the yachts emptied and there was quite a gathering in the Ottoman fort on top of the hill which commanded superb views of the harbour and adjacent beaches. 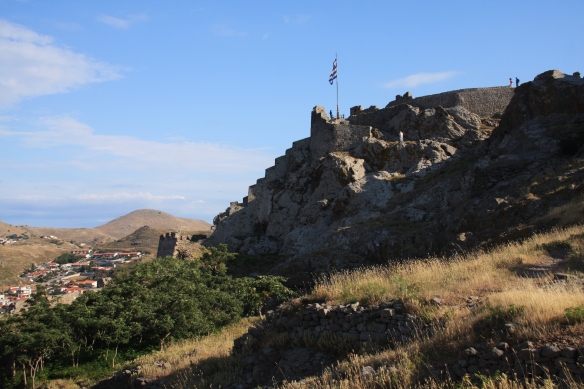 After a long and bumpy sail into strong northerly winds, we anchored in Aliki bay with its crystal clear water and marble outcrops. The sand and water are unusually white and turquoise as the island seems to be composed almost entirely of white marble.

In fact in Thassos, everything from cobblestones, to kerbstones (even harbour wall ballast) is marble! After a quiet motor in mirror calm seas the next day, accompanied by dolphins in the bow wave, we arrived in Thassos harbour on the north shore, with mainland Greece just 20miles to the north. 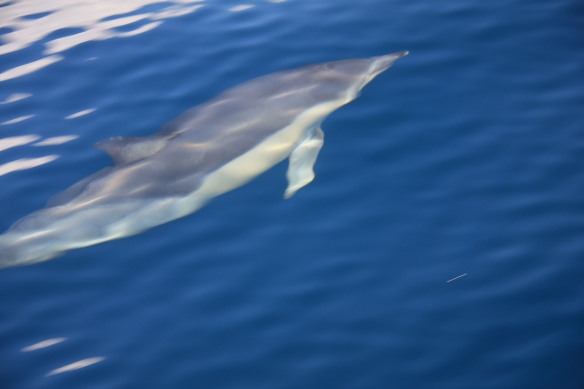 The Hellenic amphitheatre and ruins on the peak above the town provided wonderful views over the crystal clear blue water and the heavily forested island, so unlike many other Aegean islands. 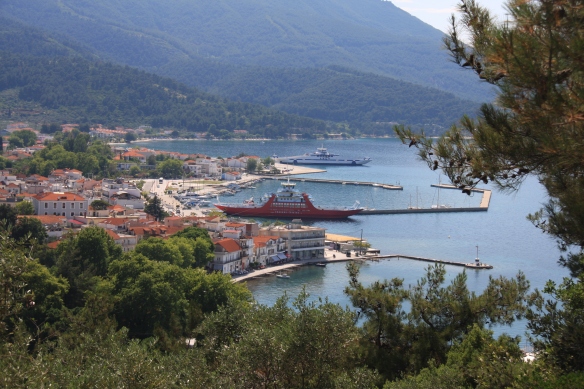 Looking at the weather forecast for the next few days, we were very pleased to have made it so far north before the Meltemi – all downwind sailing from now on!