After leaving the Northern Sporades, we had the choice of sailing south down through the channel between the island of Evia (second largest Greek island) and the mainland, or taking the faster route straight south to the Cyclades (from Skyros to Andros). Evia sounded interesting, so we chose that route, but ended up with far more challenges (and sleepless nights) than anticipated. It proved to have significant tides, currents and more pilotage issues not to mention tricky tiny harbours, really too small and too shallow for Sea Cloud.

The northern end of Evia is very green with towering mountains which always seem to be shrouded in clouds.

Shoe-horned into the tiny harbour of Limni, between a fishing boat and a not so happy Frenchman with parts of Sea Cloud overlapping at both ends. 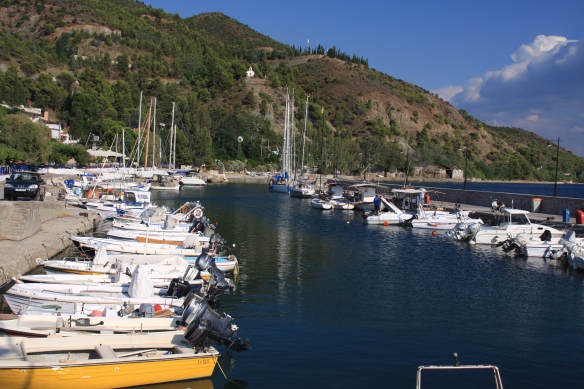 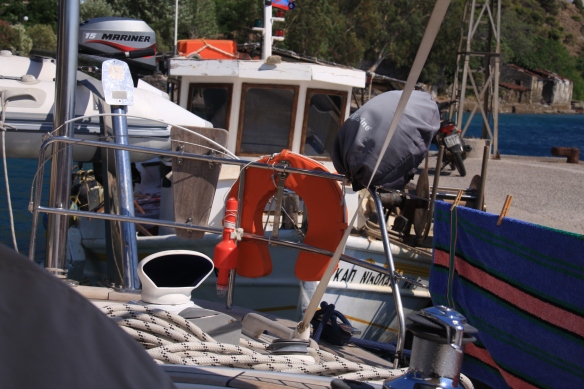 The most disconcerting part of the harbour is the extremely narrow (and shallow) entrance. We were horrified when we snorkelled over the entrance to see just how narrow and only a 2 feet or less of clearance under the keel – no room for error.

By the time we returned to the boat after dinner, the water level had dropped by about 30cm – but we were still floating. For the first time in the Med we had to think about real tides!

Just south Limni there were strange dense clouds above the mountains. Wondering about the notorious katabatic winds in the region we headed well off shore in 20 – 30kt winds while watching the boiling foaming white water being whipped up creating impressive willy willies just off the coastline. 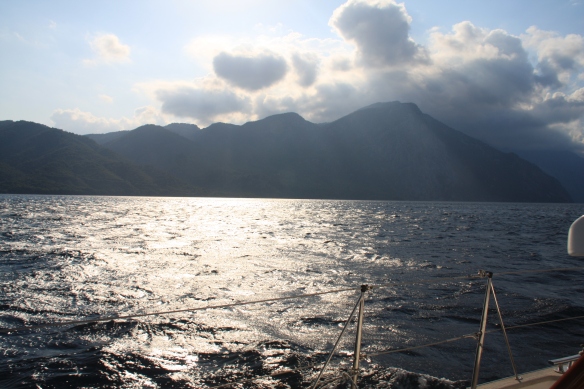 Our next challenge was getting through the Khalkida bridge which is affected by very strong currents and only opens briefly in the middle of the night (4am for us).  None of the pilot books were specific about depths and we were not convinced that our 2.4m draft would not ground at low water. The harbour at Khakhis looked a bit like a huge washing machine and it was quite disconcerting finding ourselves moving sideways at 5kts while trying to get close to the wall with indeterminate depths under it! One can see why it is crucial that the bridge is opened only at slack water.

Another tricky bit of  pilotage is required to pass under the next bridge with shallow water either side – the good old plotter had us skipping over the land again – a reminder to avoid this at night and always rely on mud maps, bearings and ones eyes!

Eritrea (Greece, not Africa) a small town with an attractive safe bay, has a modest but wonderfully organised and illustrated archaeological museum containing items from nearby excavations dating back to 9th C BC.

So that’s how they built those temples!

The nearby excavations with clearly visible domestic housing (4C BC) with preserved mosaic floors, and remains of the amphitheatre are well  worth the visit. The town itself is incredibly friendly – a good place to stop and re-provision. It is well connected by car ferry with the mainland – hard to believe this lovely place is only 45km by road from Athens.

Not far from Eritrea the winds hit, we are in the Cyclades weather zone again. Anchoring under a row of wind generators sitting atop a bald hill is always a bit disconcerting! We didn’t know it at the time, but the bay of Agios Dimitiros in Ormos Almiropotamos where we had planned a one night stay was going to be our home for the next few nights. 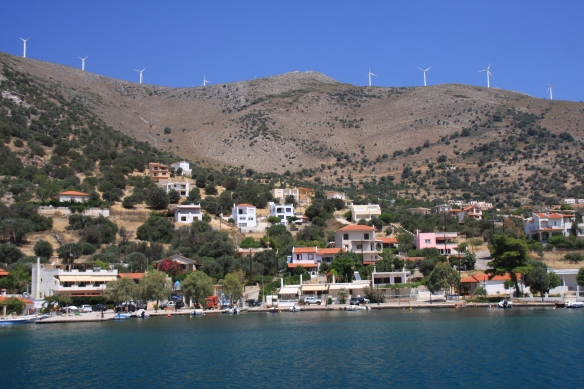 The wind steadily increased overnight and when it hit 42 knots, we decided to put out even more anchor chain at 3am – only to find the engine wouldn’t start. Planning to sail off the anchor the next day, we were dismayed to see that the local fisherwoman had thoughtfully laid her net all over it during the night -now completely  encasing the anchor chain, making it impossible to use the anchor windlass. 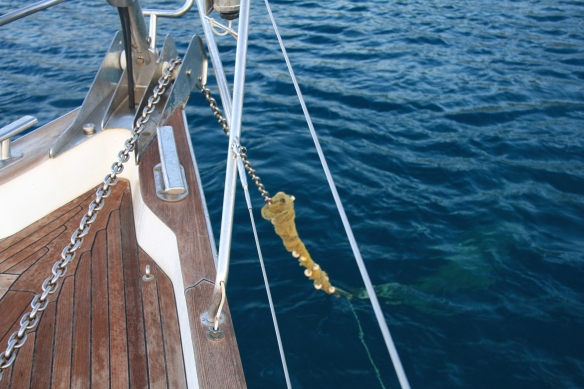 With knives working hard, we quickly realised that the extent of the problem required help of a diver and obviously postpone our departure. The wonders of modern internet –  within 2 hours, George from Petries Diving  School from the East coast arrived to help. 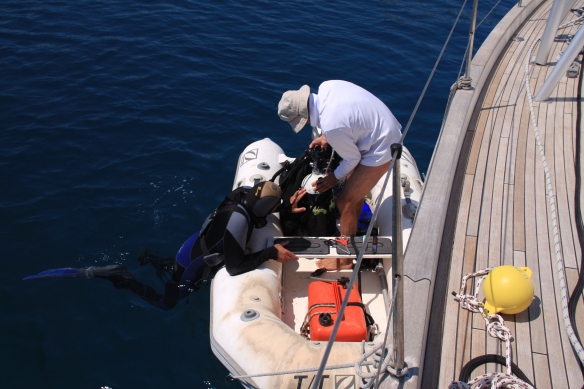 After nearly 2 hours and 2 tanks of air, George cleared the chain.

To give an idea of the wind strength and shifting direction, the anchor alarm had Sea Cloud travelling 7Nm over the ground overnight with 60m of chain out. 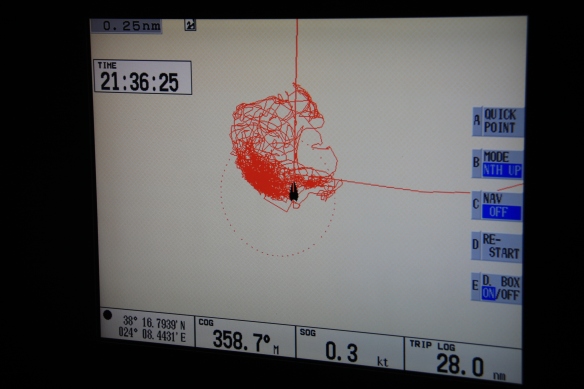 Waiting another 48hrs for easing winds we were able to sail off the anchor, pick up 15-20kts of breeze in the channel and sail the 40Nm down to Lavrion Olympic Marina where we entered the marina under sail and berthed alongside trying not to let our blood pressure get too high! Now – to unwind a little, wait for engine parts and do some sightseeing. 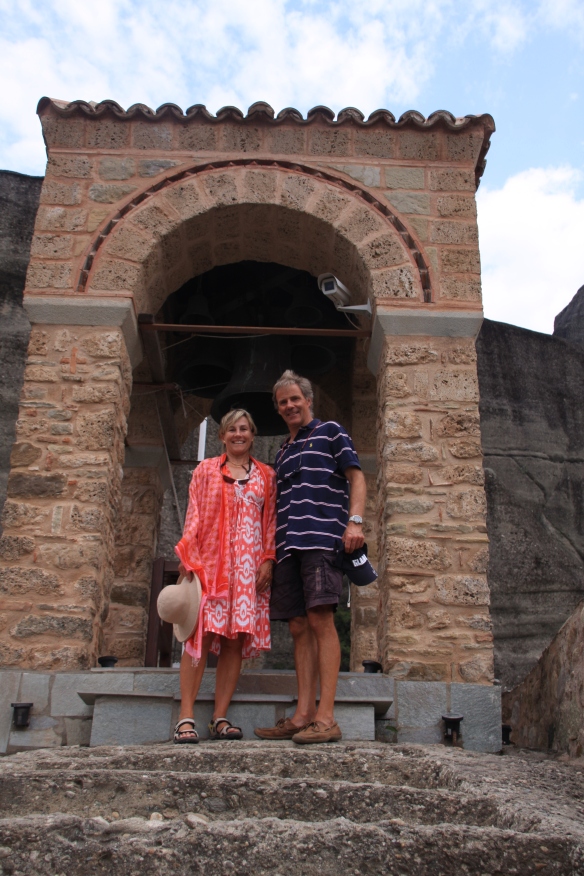 With parts on order from the UK, we headed to 400km northwest of Athens to see these world famous monasteries perched atop impossibly high rocky cliffs. The monasteries were built between the 14th -16th Centuries. Most are still occupied today, although apparently monks wanting more peace and quiet have moved to the more remote Athos peninsula. It is very popular tourist site, with tour buses lining the roads, especially to the largest Megalo Meteoro, and Varlaam.

The Roussanou monastery and St Stephens are both convents and have lovely gardens tended by the nuns. They are very serene places, or would be once the crowd of tourists leave at the end of the day. 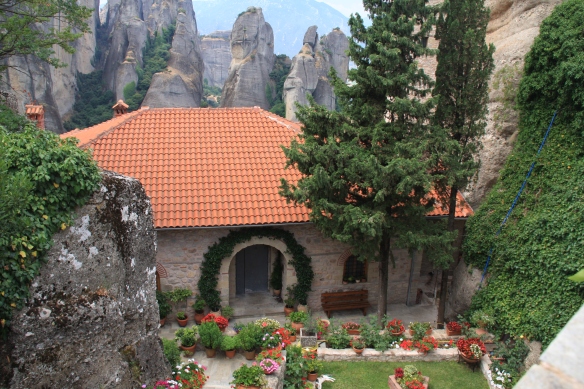 It is not a place to go if you are afraid of heights. Re-roofing, as they are currently doing to Varlaam Monastery must be a nightmare. Most monasteries today are accessed by civilized paths and stairways, quite unlike the ladders and baskets hauled up by long ropes in days gone by. 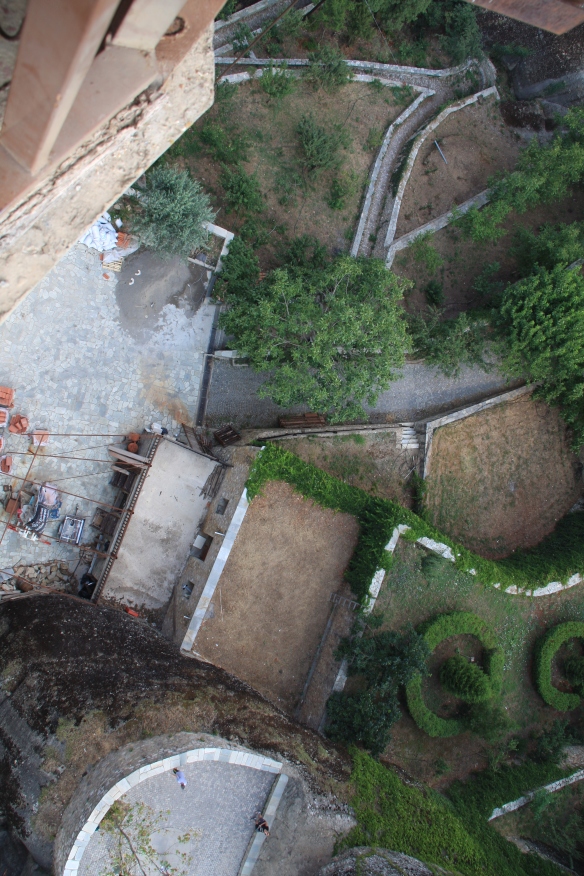 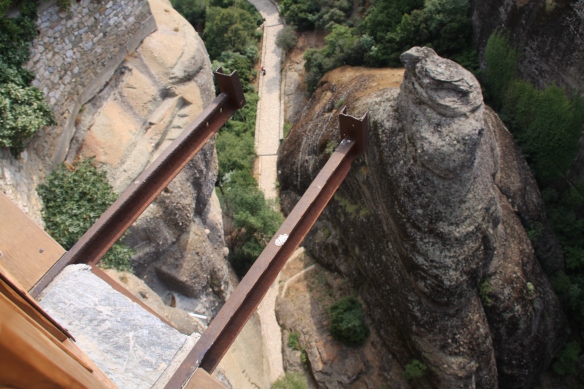 One of our favourite monasteries was the smaller Agios Nikolaos dedicated to the patron saint of ships – obligatory stop to see if we could expedite things with Volvo and keep the ship running!! 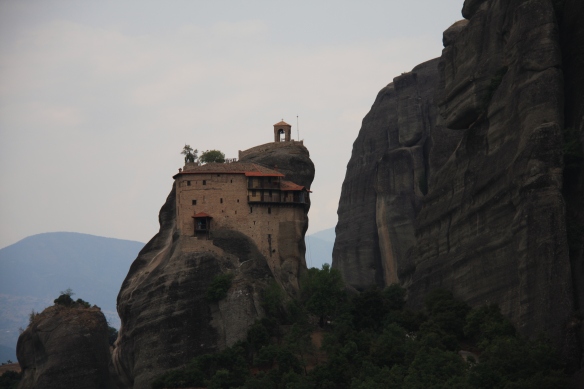 Apart from the monasteries, the landscape in the area is stunning. 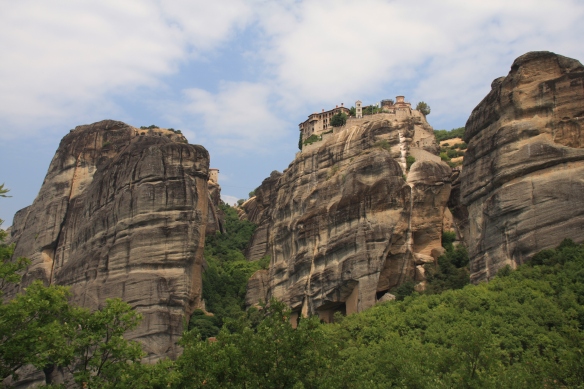 Back at  the marina, we had dinner near the wonderful Sounion temple, only a few miles away from Lavrion. Our last visit to   Sounion was in 2009, strangely enough, with another  Volvo engine failure.