Turquoise water, and plentiful wildlife were our first impressions of Kira Panayia, the most northern of the Northern Sporades islands. Sighted a rare and endangered Monk Seal on the way into the anchorage at Planitis – very exciting as there are only 600 of these seals remaining, 300 of which live in Greece mainly around these islands. 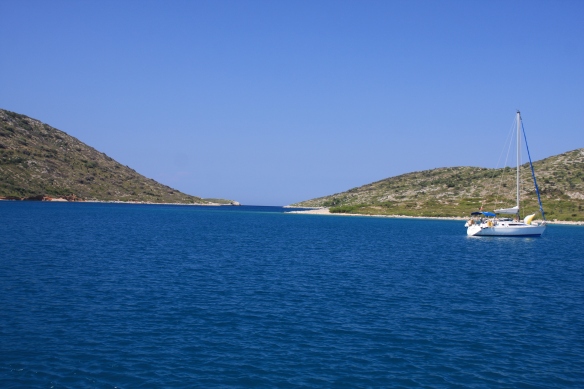 The only human inhabitants of this island are the monks in the monastery above Monastery Bay – a lovely lunch time & swim spot. 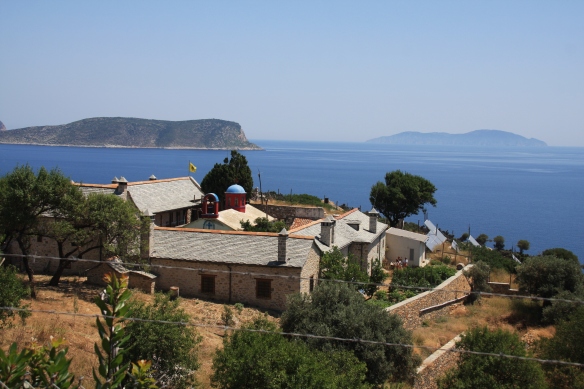 Our initial excitement at being the only boat anchored in the beautiful Ormos Kira Panagia was quickly dispelled as 6 more yachts followed us in to this beautiful spot.

Skyros is the southernmost island of the Northern Sporades group. We had a wonderful sail down to the island, anchoring in the bay. We were sorry we hadn’t gone into the port, Linaria, which appeared to be the best organised of the Greek island ports that we had seen, with laid lines and a pleasant and organised harbourmaster, a peaceful and pleasant ambiance despite the daily arrival of the large ferry, and some good tavernas.

The main hilltop town (chora) was beautifully well tended, with winding streets, a castle and monastery on the peak of the hill (both closed for renovation) and views over the rolling hills down to the sea.

After a not so good sail into the prevailing NW wind and horrible lumpy sea back to the Sporades chain, we were rewarded by the near-empty bay of in Ormos Tzorti on Alonnisos Island – our favourite island in the group. A large bay, crystal clear water, a white sandy beach, striking red cliffs.

Seeking out the Monk Seal (Monarchus Monarchus) rehabilitation station in the tiny but rustic bay Steni Vali, we decided to anchor in the adjacent uncrowded bay and take the tender around the corner. No seals in rehab right now but directed to the Monk Seal information centre in Patriti – the main port on Alonnisos. This centre is full of information about this marine park and the seals in particular – well worth a visit.

The coastline of Alonnisos is spectacular. It’s hard enough for people to get to not to be over-run by tourists and hasn’t yet been messed up with excessive doses of “villa pox” from Athenian weekenders.

Rousoumi, the bay next to Patitiri (beautiful and calm in this picture), was a convenient spot to leave Sea Cloud while we made a quick visit to the old hilltop town of Alonnisos. This village was virtually demolished in the 1965 earthquake but has been largely rebuilt in the past 10 years. It has been well restored and although a bit touristy, it has a very good mojito bar at the top commanding spectacular views over both east and west sides of the island. Obviously the small chapel here is also a popular wedding spot. 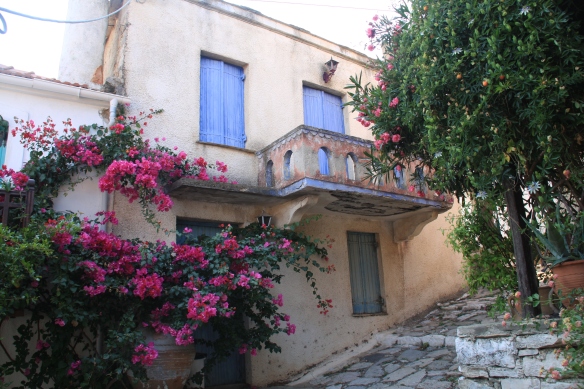 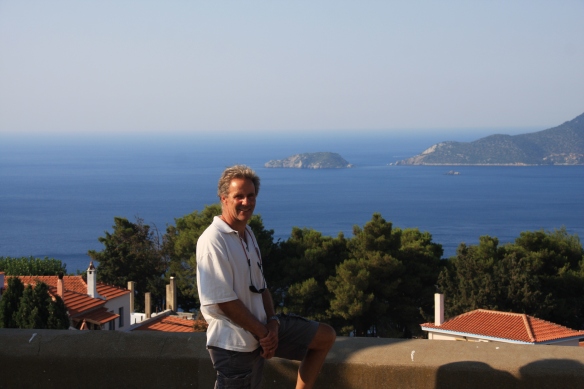 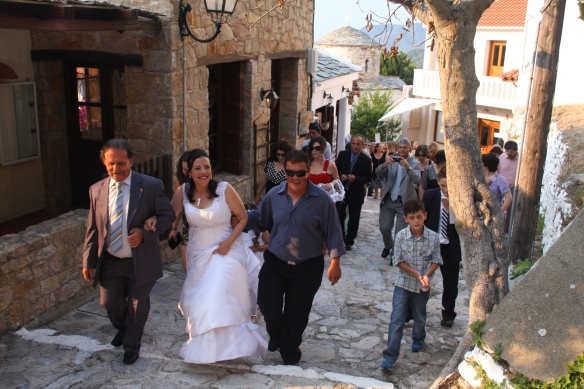 Rousoumi was not so pretty at midnight when we had to up anchor and move out due to rising winds and swell coming into what had now become a very crowded bay. With high winds and the sight of lightning to the north we needed somewhere safer – albeit requiring a disconcertingly dark motor up the coast on a moonless night back to Tzorti where we dropped anchor for the next few days waiting for the blow to finish.

It was very exciting to see Diana and Alex in Enki come around the corner into the bay next evening. Our twin HR48’s, both with Australian flags, were the only 2 yachts in the bay for 2 nights of strong winds, eating, drinking, and good conversation. It has been great getting to know Alex and Diana, and having them at the end of email, phone or Skype to which we frequently use to discuss mechanical issues, or even the joys of cruising. 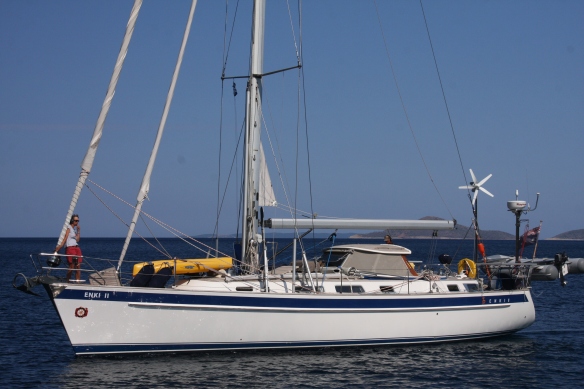 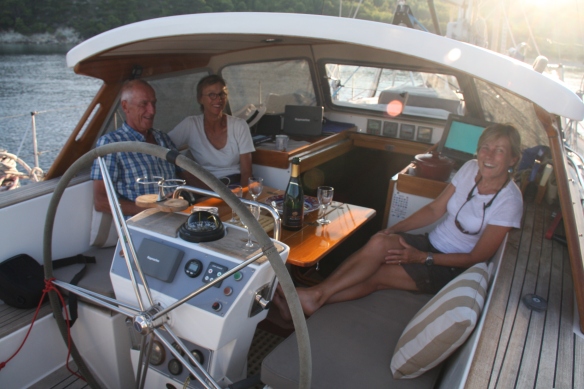 We had a challenging sail tacking up to Skopelos, against the current and dodging 4 ferries in the narrow channel between Alonnisos and Skopelos. Skopelos harbour was busy with ferries and yachts – this brave yacht pictured seemed oblivious despite the ferry tooting and holding its course. 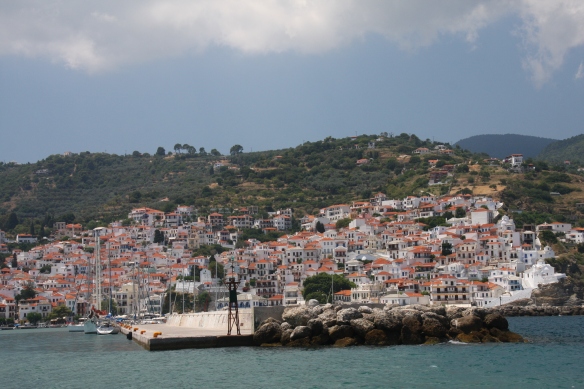 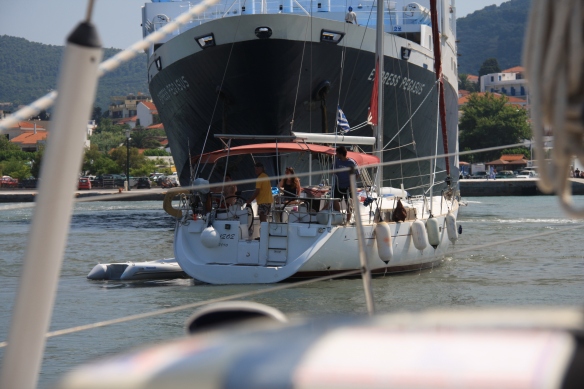 Skopelos, (aka the Mamma Mia) island, is very pretty with its white houses with red roofs, many small churches and cafes and bars overlooking crystal clear waters. 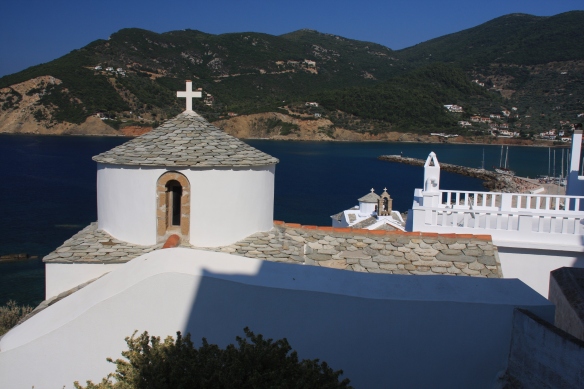 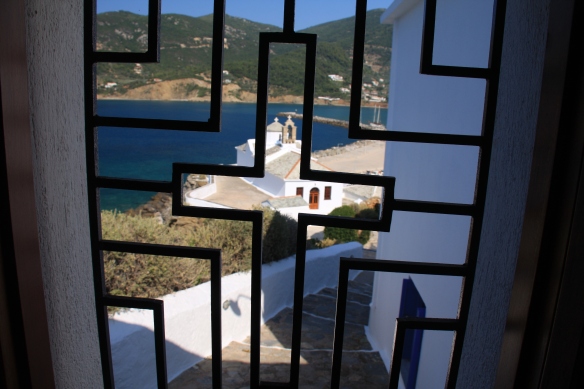 This mojito bar has a million dollar view, a kitten on death’s door a feisty pooch  and Abba playing in the background.

A touching photo – a minute later the dog having had enough of kitten rehab, tossed it to the ground. 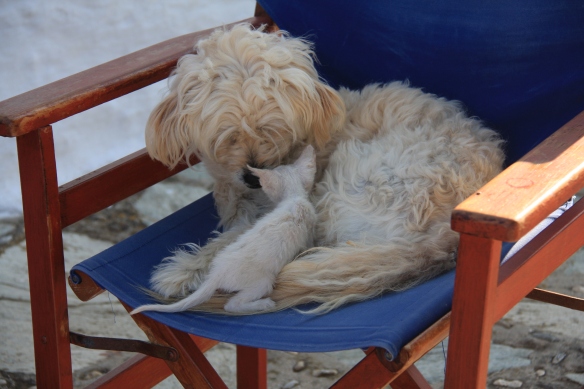 Skopelos has some spectacular bays such as Ormos Siferi. Although this is crowded during the day, we were the only boat overnight – very impressive in mid July! 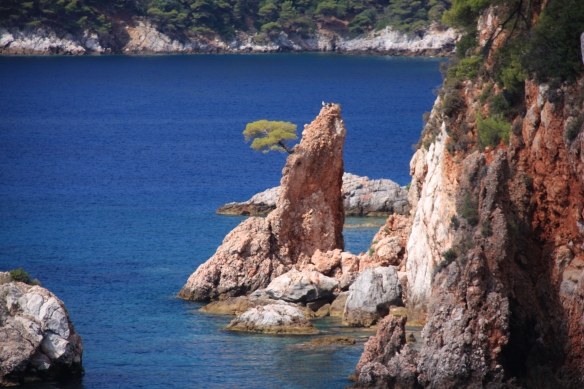 Skiathos, the southernmost and most developed of the Northern Sporades chain was our least favourite island – although obviously very popular with some well heeled Athenians.

It does have some spectacular bays but we’re a long way back to Turkey and we need to get moving to Evia.