Athens seen from the water is a huge, dense sprawling city and the waters around studded with tankers waiting to enter the harbour. Hard to believe seeing dolphins this close to civilisation! We have seen them almost every longish sail since arriving in Greek waters (and one very rare monk seal).

We berthed in Marina Alimos about 15minutes by taxi and 40 minutes by tram from the centre of Athens. After a day of sightseeing and a wonderful dinner, we welcomed Andrew onto Xela at 3am. The new Acropolis Museum is an architectural delight, a beautiful building suspended over an archeological site. Andrew had many opportunities to practice his new passion of photography, taking some wonderful photos during our time with us.

We (and 3,000 tourists disgorged from a cruiseship) visited the Acropolis and were lucky to see rehearsals for that night’s performance of Swan Lake in the Odeon of Herod Atticus, but unfortunately all tickets sold out for tonight. It would have been great to see a performance in one of these wonderful ancient sites being used as venue for the Athens Festival. 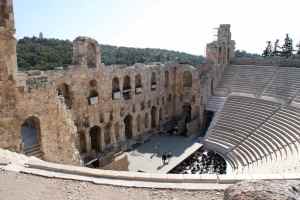 We all really enjoyed the atmosphere of Athens and the fantastic glimpses of the ancient sites seen from so many spots while wandering the streets of the Plaka. 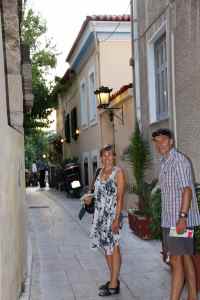 Off to the Cyclades Islands in the Western Aegean, with its reputation of beautiful barren islands with little white houses and the howling meltimi! We had initially planned to sail all the way across the Aegean to Turkey, but while in the Ionian, decided that this was not realistic achievement in the time that we have. Sailing east across the Aegean with strong, mainly following, winds to Turkey would be easy. However, getting back, with the meltimi on the nose, would be extremely hard work and could take a lot longer than we really have to achieve this.

We decided that best to sail south east with the prevailing NE meltimi in the Western Aegean, to visit the islands of Kea, Kythnos and Siros and then travel by ferry to Santorini where Andrew would join his friends. These islands, relatively close to Athens are more popular with local rather than overseas tourists. Our first stop, Kea, had an amazing capital Iouleda, a village nestled into the valley, with a maze of tiny streets and little houses, which were almost built on top of each other. 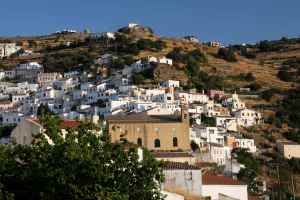 Over dinner we met a local sailor Karatasso, a lovely man who became our advisor on weather, places to anchor and eat during our stay in this part of the world. Communication, in particular up to date weather information has been a constant struggle in Greece as we are only able to access on line weather forecasts from internet cafes. Unlike Croatia, where we bought a USB modem for internet access, Greece has no such plans available for tourists. Our regular calls to Karatasso were great as he was able to provide us with 3 day forecasts, very necessary to supplement the 12-24 hour forecasts provided by VHF on “Olympia Radio” and our Navtex (when it works).

Andrew settled into life on board very quickly, working on his tan, photographing lovely sites such as Sand Bar Bay on Kythnos, and providing a very welcome additional pair of hands.

After a very challenging sail in mounting winds and seas, we arrived in Loutra Harbour on Kythnos.

In the picture (below) Loutra looks very benign, but we arrived, with a 24knot wind behind us, charging into this bay towards a very shallow lee shor, when the steering failed. Luckily Ian had identified the problem the day before, so was able to react and alter course just in time to stop Xela either running onto the beach or the nearby rocks! 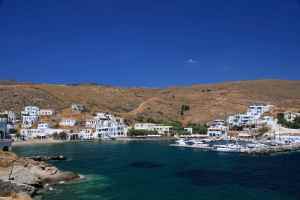 After all that drama, Loutra harbour was full. Hence we anchord in the nearby bay, a peaceful cove, full of boats visiting for the day to eat at the wonderful taverna on shore. 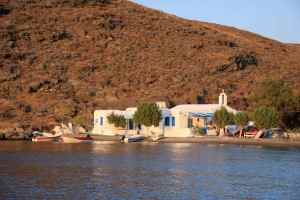 Our peaceful night was interrupted when the boat next door dragged anchor in the middle of the night. Captain Ian was up giving orders when Andrew suggested he “chill-out”! This caused the only clash between father and son during Andrew’s visit. I think Andrew was quite surprised at how tricky the conditions were at times and saw first hand the stresses encountered during med-mooring. The next day was spent in the calm of Loutra Harbour to provision the boat. Our rule to ‘never trust an old lady in black with a hairy chin’ was once again reinforced by this delightful (but very pushy) shop owner!

We left Xela in Finikas harbour, on Siros, the capital island of the Cyclades. We organised repairs to the steering and windlass (again!), and caught a ferry from Ermoupolis to Santorini.

We had a half day stop-off in Paros, a delightful island with lovely winding streets, windmills and lots of whitewashed and blue houses and churches.

Amazingly, our connecting ferry from Paros to Santorini was carrying Andrew’s friends (Kate and Jess) from Athens to Santorini – a perfect rendezvous after so many miles and the vagueries of the weather and technical failures.

As nearly every mechanical system on the boat has now failed twice, it was wonderful to leave the boat secured for a few days to get repairs and for us to crash in the comfy Hotel Villa Renos in Santorini – the first sleep in a real bed in over 3 months!

What a spectacular island! We settled in to the lovely Hotel Villa Renos, with its wonderful views of the caldera, fabulous breakfast, comfortable beds (which do not rock) and friendly hosts. We realised that we had made the right decision not to sail to Santorini as the marina is too small and largely blocked at its entrance with depths of only 1.5m. Some boats tie up temporarily to the large buoys in the caldera (but not suitable to overnight or even leave the boat for the day). 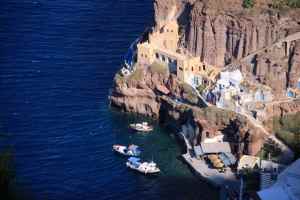 We rented a car and toured the island, a highlight being the town of Oia on the northern end. Amazing how they cope with building on the edge of the caldera in an earthquake zone. Note the maze of staircases which do raise a sweat on a hot day.

Andrew and his friends, Kate and Jess, joined us for sunset drinks on our terrace and our last dinner with him before he headed off for more partying in Mykynos and we back to our much more sedate life on Xela.

Back on Kea Island, we discovered the beautiful Kavia Bay, and spent a superb day swimming, relaxing in calm conditions, and thinking how grand life was! The water was so crystal clear, that we could see our anchor chain 22feet below us! (Look carefully in the picture)

We didn’t realise how important that anchor and chain would be until the next morning when the Meltimi hit, howling into the bay, gusting up to 35 knots into our recommended “sheltered from meltimi” anchorage!! Our plans for sailing to Poros were aborted as we tried to settle down to sit out the winds predicted to increase further to near gale/gale force. The next 3 days and nights were spent diving to check the anchor 2 x daily and constantly checking our transits to ensure our anchor wasn’t dragging in the high winds. It was difficult not to be “on edge” and we did lose a lot of sleep overnight! It is incredible how much the boat can ‘sail’ back and forth at anchor; how much the wind screams in the rigging, and how much the anchor chain grinds. Frequently at 2am one of us would be up on deck checking things. It was interesting to note, that on most boats in the bay, there were similarly concerned people on their decks on anchor watch also. – we weren’t the only worry warts! At the end of 3 days, despite huge strains on the anchor, it never dragged. On our last day in this attractive bay, we swam to the beach for a relaxing few hours in the pretty ‘resort’ drinking frappes and watching the now modest meltimi whistle across the bay at 20-25kts.

The wind had settled down to ~25knots the next morning, so we set off to sail back to the mainland (Attic peninsula) across the Kea strait in a somewhat lumpy sea. 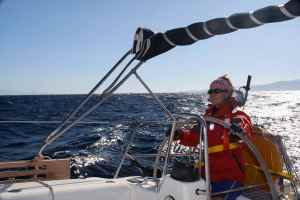 Approaching Sounion on the southern tip of the Attic cosast – the engine failed. The winds were increasing and we considered beating hard to windward up the east mainland coast to Olympic marina or to Lavrion Harbour just north of it to seek repairs. The former was full and the latter would be tricky to get into without engine (not to mention a very long tedious sail to windward). With a prediction of winds increasing further, our only option was to sail into Sounion Bay right on the southern tip of Attic peninsula. Sounion is documented in the pilot book as having “unreliable holding”, meaning that it may take a number of goes to anchor successfully and have your anchor hold. We caused considerable alarm among the anchored boats in the bay as we tacked back and forth into it in 24kts of wind under full sail looking for a spot! We found the right depth, hoped there wasn’t too much weed there and Cathy nailed the anchor first time. A great relief as the prospect of dragging amongst the boats and trying to reset the anchor under sail alone was not appealing! We arranged for repairs and then sat, watching other boats arrive, hoping that our anchor would continue to hold in this bay with a “reputation”. As the bay filled up quickly, it meant that with each additional boat, our room to manoeuvre decreased, making the option of sailing off anchor increasingly difficult. Amazingly, we arranged for Lorenzo to come down from Lavrion to help repair the engine within 24hrs. We could then relax! Spent the day visiting the beautiful Temple of Sounion overlooking the bay and having a lovely fish meal (with Santorini wine) on shore. Our previous worries about anchors dragging now seemed rather insignificant, as we realised dragging was not really not such a big deal if you have an engine to help you reset it!

Favourable forecast for the next day or so, with more gale force winds close behind, meant that we left early the next morning aiming for Aigina Island in the Saronic Gulf and onto Korfos on the Peleponnes arriving late afternoon. Just in time for Peter (former VFL player for Collingwood; currently Athenian cab driver having a day off in Korfos) to take us to the ancient site of Epidaurus. Again, we had the program and new we had arrived one day too late to catch a live performance in this magnificent amphitheatre. 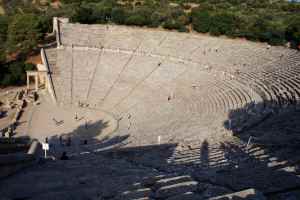