Our time in San Blas cut short, entered the Port of Colon earlier than expected and under sail after an engine failure. Here is Ian’s account of our fun.

Made an unscheduled “emergency” passage to Panama yesterday which focused our attention and kept us wondering why we do this stuff. We were about to navigate some very tight shallow reefs in the islands when the engine (aka “green death”) decided to fail. After the WTF’s and teeth gnashing settled (having recently put this engine though a very major service at enormous expense) and only just the day before feeling very smug that I got the generator working again, we needed to decide quickly what to do.  Long story short, we had to turn around, head out to sea and embark on a 15hr (120mile) passage overnight to Panama for repairs. Sat phoned the Canal authority and got permission to enter the harbour under sail first and then had a restless night with fluky winds from 5 – 25kts, and uncomfortable confused sea while trying to keep enough sea room off the coast. Arriving 10miles from the Panama breakwater in the dark & rain, there were ships lights everywhere of course. Waited till dawn, kept out of the shipping lanes and kept the harbour master appraised by VHF each 2miles on approach. He was great and very tolerant! One mile out watching the waves crashing over the breakwater and some very shallow shoals to leeward, he asked us to slip in 10 minutes behind a huge tanker- and keep moving! At this point the wind dropped to 5kts, we had everything up and poled out genoa going nowhere. Fortunately the current wasn’t too bad and the wind then piped up to 12kts, dropped the pole, set the genoa on the other side and entered on a broad reach. We slotted in through the gap 4 minutes behind the tanker. It felt like the start line at the RPA Sat races trying to juggle boat speed and position – would have nailed a perfect start!! Then slipped across the outgoing shipping lane and dropped an anchor out of everyones way (on the edge of the explosives anchorage). Having just a entered Colon harbour and safely anchored I finally relaxed the anal sphincter. I guess it puts hairs on ones chest but some days one feels the one’s rich tapestry has enough threads in it and one just “wants a nice house, a dog and a German car” –  and a lot less adrenaline!! Cathy was absolutely fantastic throughout as we were repeatedly in situations where 2 brains were flat out with sail handling, navigation and pilotage. Even pulled out the Skippers Handbook to revise my lights and shapes with so many ships around in the dark.
Colon is pretty much as the name implies! This end of the canal is a bit weird – definitely not the “oral” end of things. I think many of the sailors, if they are not “going through”,  come here and stay here  for a long time. Anyway, we availed ourselves of happy hour and a hearty meal at Shelter Bay marina last night and crashed out by 8.30pm to fight another day.
The engine fixed (by Ian), Sea Cloud measured and a canal transit date of 15th February booked, we settled in to life in Shelter Bay Marina. There are many ‘boat jobs’ to be done prior to heading out into the Pacific, but the list is almost done! To our surprise, life in Shelter Bay is fun. There are morning yoga sessions, nature walks through the jungle looking for the elusive monkeys behind the marina, cruiser dinners, music nights (with really good music) and many interesting people to meet.
We had our first view of the canal through the marina shopping bus window as we passed by the locks.

The tourist train from Colon to Panama City was another great opportunity to view the canal and Gatun Lake where we will anchor overnight when we transit. 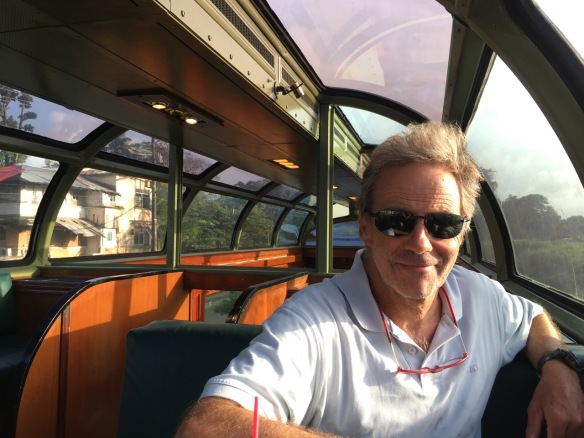 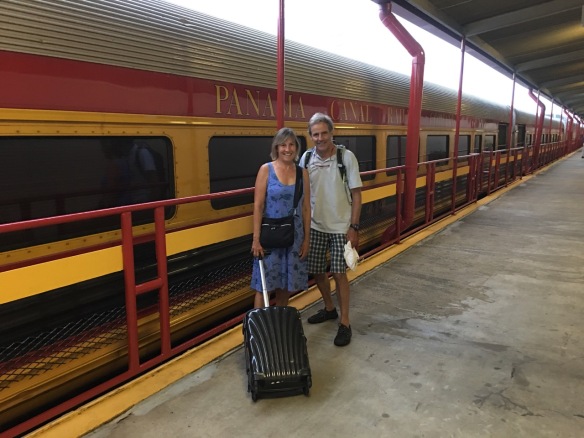 Panama City was a lovely surprise. The old city is being restored, although the ‘gentrification’ is not popular among many locals who live very cheaply in the old crumbly buildings.

The city is a real mixture of old an new as seen from our rooftop terrace.

We had our first view of the 5m tides that we’ll encounter on Sea Cloud in a few weeks. This will be the first time in our 7 years of cruising that we will have to think about calculations to ensure that we don’t find our dinghy hanging from the dock if we leave the lines too short. Most of the fishing boats sit on the bottom next to the fish market dock.

We checked out the anchorages and marinas close to Panama City – Amador and La Playita.

Then the express bus back to Colon and the marina. Love the colourful Panamanian buses!

Our return to Marina Santa Marta coincided with the onset of 2 weeks of gales. The wind howled day and night, night being worse when the wind was often was in excess of 40knots. Fortunately, there was a great group of cruisers, also stuck there. We had a few days with our new friends in Minca, the small hill town high above Santa Marta. It was great to do some walking and to escape the wind, heat and grit for a few days. 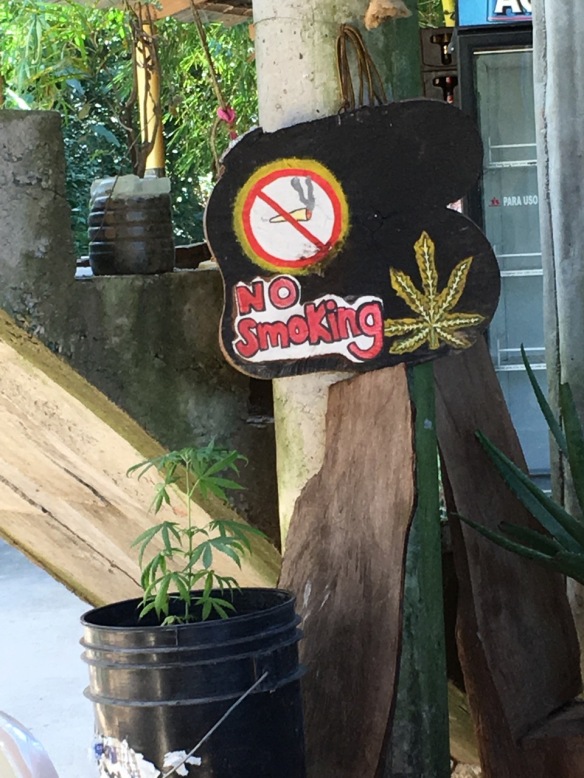 Kenny, the host where we stayed in Minca made a very good mojito.

Christmas was a good time to be in Santa Marta. The street music and performers were fantastic

We found some great restaurants, our favourite Lulo’s (Ian’s vote for best mojito) and Ouzo where we had a delicious meal on Christmas Eve. 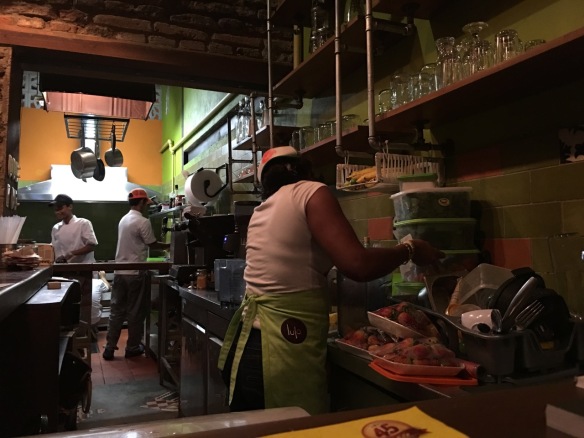 Christmas was spent with a group of new friends on one of the party boats (ie catamarans). 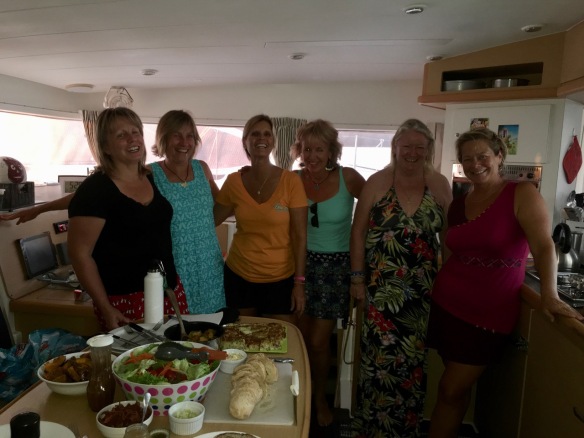 The marina put on a lovely party for the cruisers on the 26th December, the wind dropped on the 27, and on the 28th, we were out of there!  After an uneventful 2 day passage we navigated our way through the tricky shoals for which San Blas is notorious. We had 3 navigation systems going. Open CPN, which we’d only just installed was invaluable.

We anchored near our Austrian friends on Fenua in a piece of paradise, Green Island. 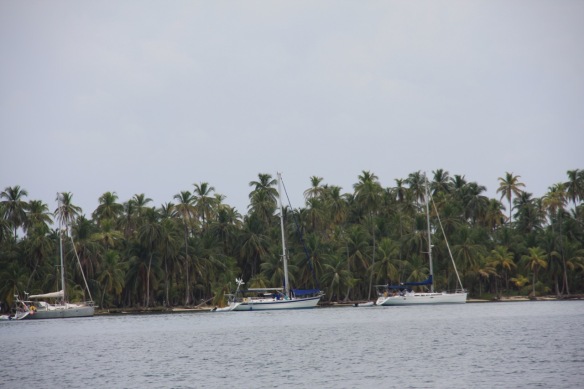 Coconut palms swaying in the breeze, pelicans diving, calm water and no bugs! 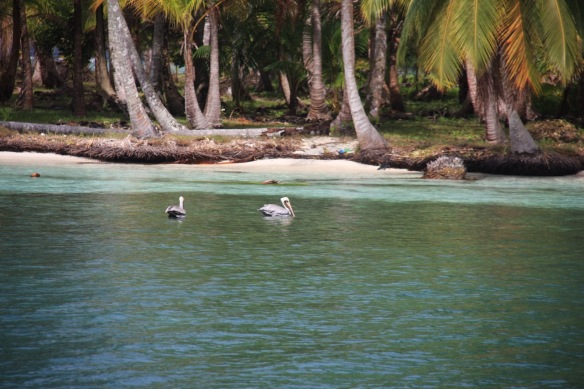 Not long after we anchored the lobster boys arrived. 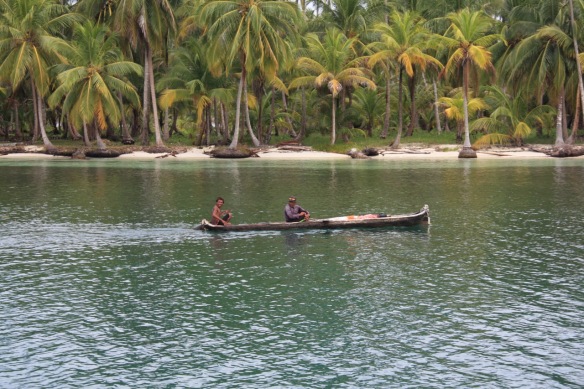 Now this is the life – $5 each and absolutely delicious barbecued. 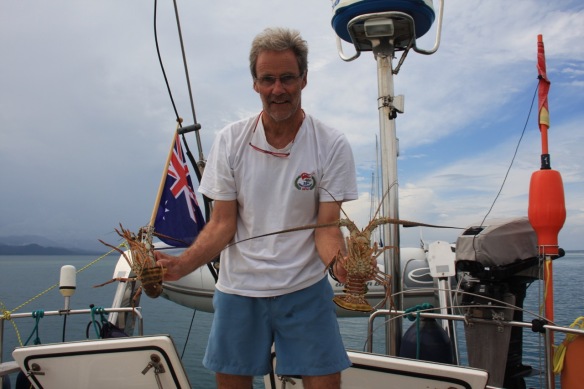 New Years Eve was spent sharing drinks and plans with cruisers around a bonfire under the coconut palms, before BBQ lobster on Sea Cloud with Katharina and Friedl. The only problem with this lovely sight is the thought of sharing the waters with the resident crocodile.

Check in to Panama is not easy these days as formalities can  no longer be done in Porvenir  in the San Blas. So, we’ve just covered 60Nm to Puerto Linton to check in and will head back to the islands tomorrow. Hoping the trip back will be okay, as its usually a beat to windward against the current. At least we can get some shopping done in Portobellow, as apart from the lobsters and occasional veggie boat, there is not much in San Blas. All part of its charm.

Although you can buy molas made by the local women…