Almost a month has slipped past since Sea Cloud was boarded by a couple of pale-skinned, bleary-eyed, past-their-prime individuals whose most convincing claim to a berth on the vessel as she headed westward from French Polynesia was an intimate knowledge of her dark and private spaces, and a fair to reasonable understanding of how she is likely to perform in a variety of gnarly situations. 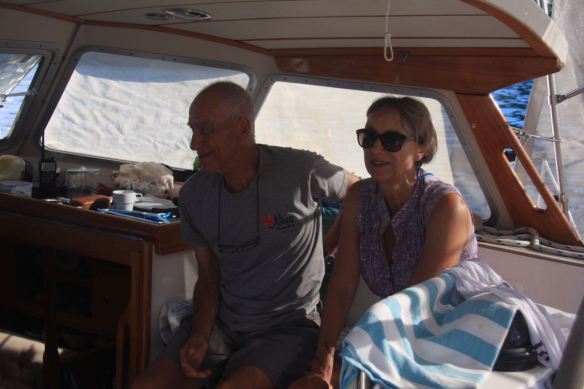 Would you sail across an ocean with these two?

The crew are still on board. Jeez, Barry.  The good-humoured captain continues to propose Dark and Stormies each evening as the sun goes down – or not, as was the case last night when Neiafu harbor was a blur of low cloud and fine drizzle. We are tied off to a mooring here, debating endlessly (as happens always in these situations) the merits or otherwise of departing for New Zealand today, tomorrow or the day after. You wouldn’t believe the algorithms these weather people can come up with now. The skipper has a rather inelegant phrase to describe what they do to your head.

This next 1200 mile passage from Tonga down to the top of New Zealand is the big one. It’s the one everyone stresses about, and it’s when a couple more hands on deck can really be useful. We’ll just say that it’ll be fine, and we’ll tell you when we’re into Whangarei, our nominated port of entry.

To backtrack though….The passage from Bora Bora through to Tonga is frequently under-estimated by cruisers. More tradewind sailing, dah de dah. Piece of cake. Actually, it proves not to be so often. Actually, it’s also 1200 miles, and that’s a long way.

On passage we are all big readers

Sea Cloud broke her voyage at the 1000 mile mark in Niue, bypassing all of the Cook Islands including the curiosity of Palmerston (an atoll supporting 60 people) in order to have something more interesting to do during the enforced four-day layover. There was no proceeding past Niue because the weather ahead had turned to custard. Big seas, big winds. 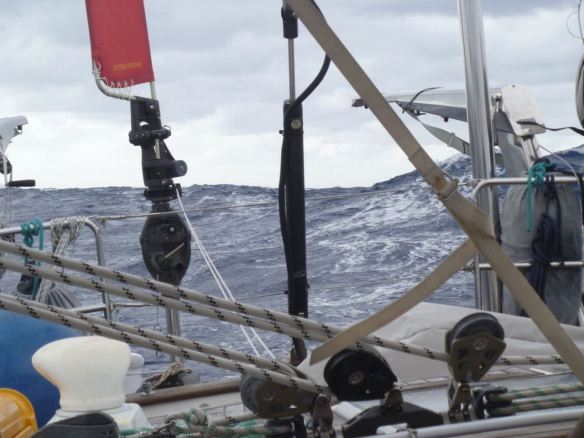 Niue was fun. Sea Cloud’s skipper and his fabulously cheerful wife put high store on achieving a decent fun-to-crap ratio (another of the skipper’s memorable phrases, by the way). So we got out there in a rental car for a couple of days. You really can’t go that far in Niue, which is a smallish limestone rock surrounded by crashing seas. But what you see is dramatic, and the water is so startlingly clear (the limestone again) that when you don mask, snorkel and fins, the sights under the water are astoundingly vivid. Top marks to Niue for water clarity and surely some of the world’s most bizarre limestone formations.

It seems complicated at first, but you soon get the hang of lifting your tender ashore on Niue 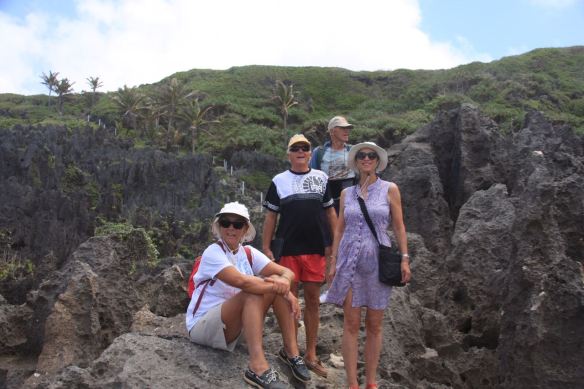 Walking on Niue with Dominique (front) and Frederic of Cap a Cap, a French-flagged Garcia 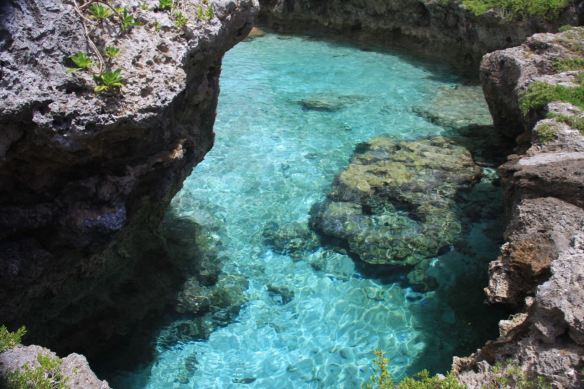 The glorious colour in Limu pools, one of the clearest snorkelling spots on the planet, surely

Ian will not remember Niue for the quality of its bush roads however. They are off the chart in terms of potholes, scratchy bushes, and reliable lack of signage.

We pushed on from Niue a little ahead of time, forcing Ian and Cathy to cancel a dive. More’s the pity, but if there’s a choice between taking the wind, and taking a dive, the wind wins. Even so, we lost it about 12 hours out of Tonga. That opened the way for a bit of fishing. This (below) is the money shot, perhaps not the one Ian wanted, but it expresses the essence of the fight. The Prof vs the Sailfish. Yes, that’s right, folks. Game on. Cathy wasn’t keen on the event at all, but Ian was determined to bring the big fish into the boat. Then, and only then, did the first mate get the go ahead to cut it free.

The Prof vs the Sailfish

Sea Cloud entered the Vava’u archipelago on a perfect Sunday afternoon, when all of Tonga was either asleep or feasting on barbecued pig, and dropped anchor in Port Maurelle, a bay remembered fondly by the crew from their own cruising days in Vava’u in 2015.

Swallow’s Cave, on Kapa island, in the Vava’u archipelago, Tonga 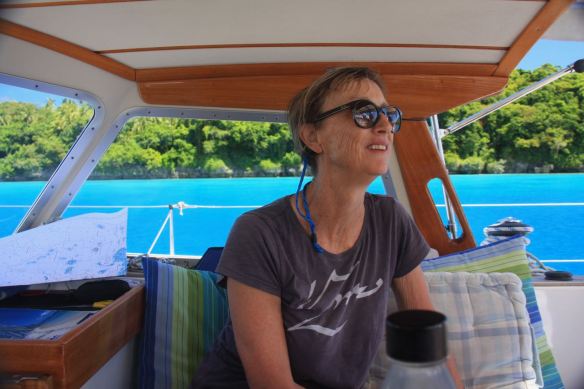 With only five days out in the islands, we’ve managed to tick off Swallow’s Cave, Hunga lagoon and the splendid coral garden snorkel near anchorage 16 (the Vava’u island anchorages are so difficult to remember, and there are so many of them, that cruising yachts and fishermen refer to them by numbers). 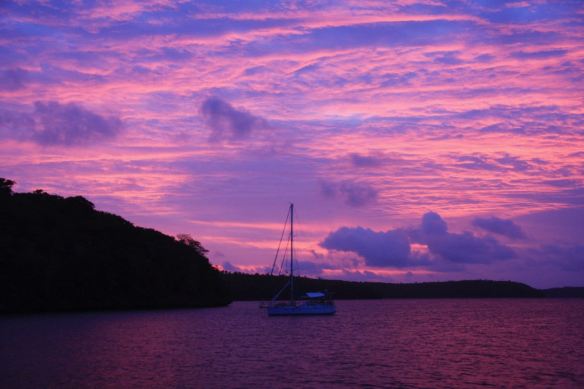 The floating fish and chips shop 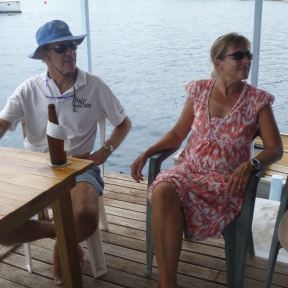 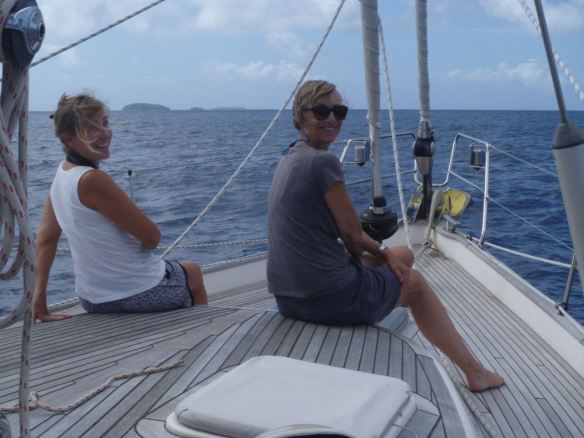 And Cathy and crew hit the market hard. We’re leaving port with a stack of pineapples on the aft deck, and the benchtop packed tight with tomatoes, green peppers, bananas, papaya and new potatoes.

To market, to market…to buy what we need 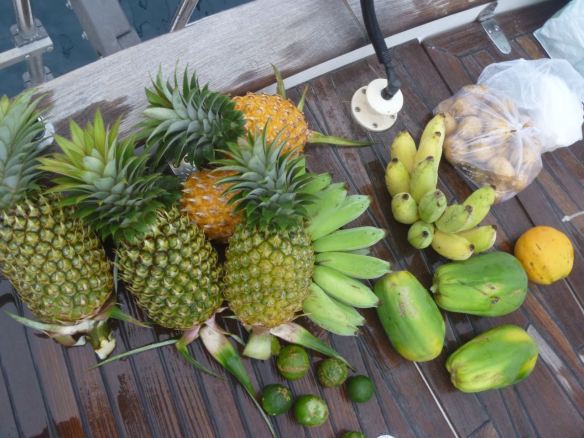 The crew have a tan now, by the way. It’s unfashionable to acquire a tan these days, but here in the islands, it works better than pale with the prevailing fashions. If summer temps have arrived by the time we reach New Zealand though, I’ll eat my salt-infused hat.

Jeez Barry,  you’d think they would have had enough of each other by now

This market lady sold sweet basil and other herbs, with cruisers in mind 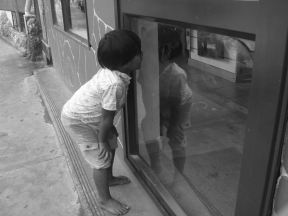 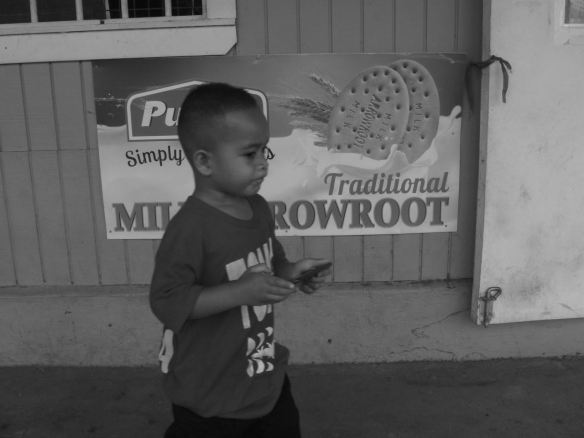 Future Tongan rugby player on the mean streets of Neiafu