Our month of work and catching up with family and friends behind us, we returned to Sea Cloud Italy for some land content in conjunction with a conference in Bologna. We spent a few days driving, cycling and eating our around Ravenna, Ferrara and the Po Delta.  It was great to catch up with our good friends Beverley and Dwight in Bologna, in between conference sessions. 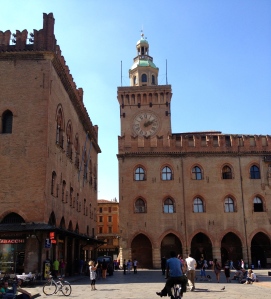 Cath’s brother David had arrived in Marmaris a few days before us, so we were all keen to get sailing. Reprovisioned and cleaned Sea Cloud in record time before a great sail to Bozuk Boku, albeit into a SW wind on the nose. There were 4 Hallberg Rassys in the bay that night, one being another Aussie HR48, Enki II (2005). It was great to finally meet  Alex and Diana with whom we had been corresponding intermittently by email for the past 18months. 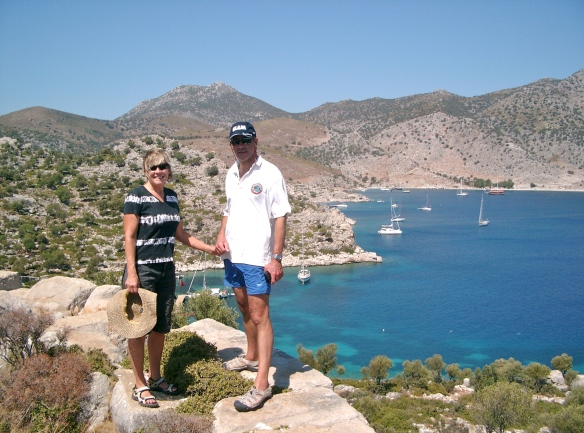 Bozburun and our favourite Kisel Adasi anchorage were the next stopping place. We were greeted as usual by ‘Mr Paradise’ in his small supply boat and the other locals who regularly visit the bay supplying us with fresh bread and this time, the most amazing fresh figs. Main problem is trying not to eat too many of them as it can give the heads quite a workout!

During our brief visit to Symi, where we anchored in Pethi (one bay south of the main harbour) we witnessed the distressing sight of a local moored yacht suddenly catching on fire. Terrifying to see how quickly the fire caught hold on this timber yacht. There was no sign of the fire brigade, just a group of nearby locals with buckets extinguishing the blaze.

Donkeys and horses are not just used to carry tourists in Greece, they are also used for lugging cement and building materials up the steep and narrow streets of Symi. 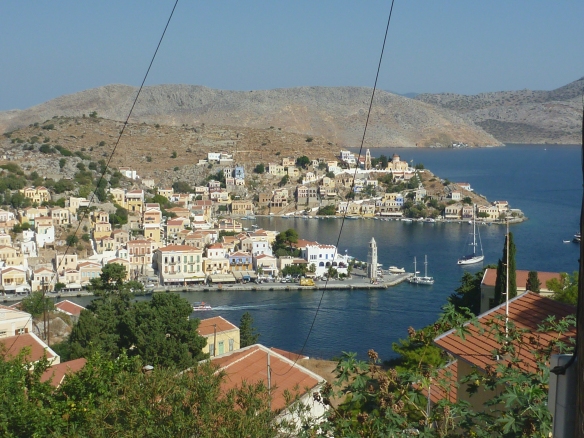 September is a great time to cruise, we were the only boat overnight in this lovely bay with its beautiful pebbly beach and just a few people camping on shore – also a good place to search for interesting coloured beech pebbles for Cath’s collection. 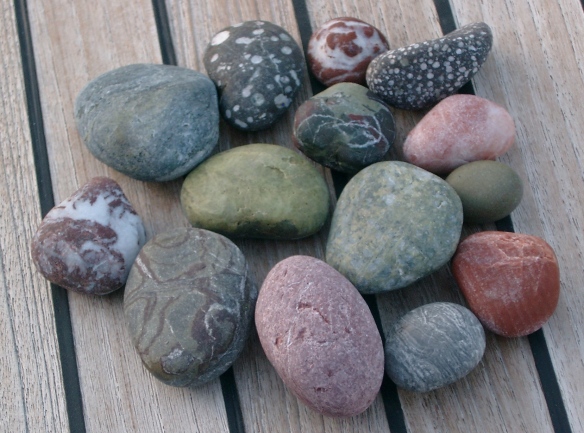 We had to show David Knidos and anchored in the bay in the calm to explore the ruins (originally Greek, C 350BC). The following morning the crowds were well and truly there, with gulets dumping anchors anywhere they could – often disturbingly close. That’s the price one pays for popular spots near ancient sites. 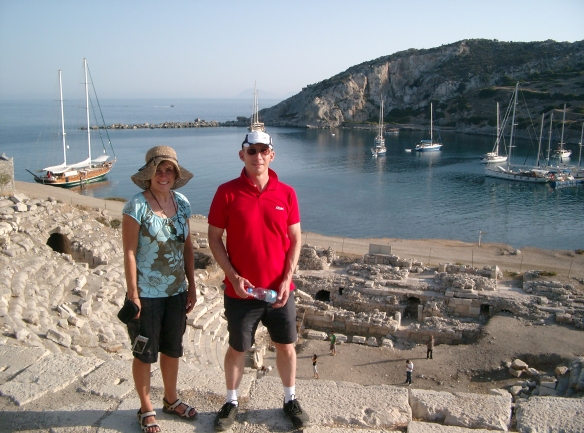 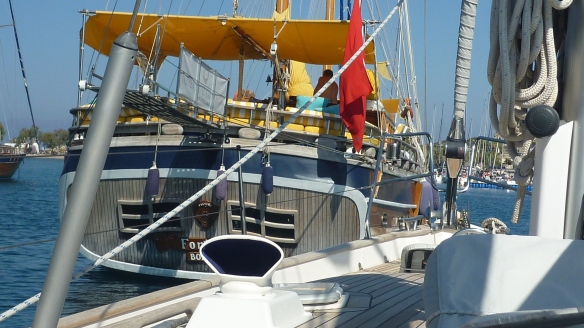 The light winds were the perfect opportunity to finally pull out the gear and put up our cruising chute. So easy to do, and such a pleasant sail in very light winds on our stern quarter. 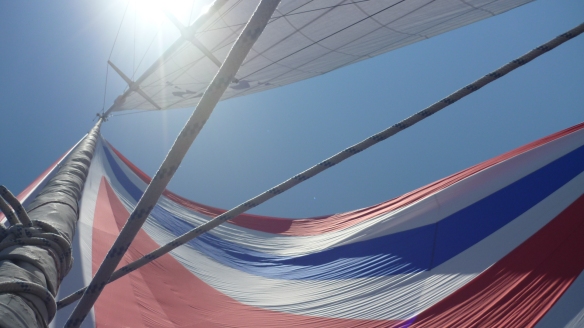 Bodrum, David’s drop off point was a good opportunity to reprovision and visit Kocadon, the restaurant we had been to previously. While David checked into his hotel, we watched the antics of a pair of very drunk, topless French girls who managed to smash glasses and dump pool furniture into the pool. The poor Turkish men staffing the hotel had to try to deal with these 2 who were only wearing very brief bikini bottoms.  Despite Ian’s enthusiasm to capture the event on film, I wouldn’t let him take photos of this for the blog! We enjoyed our view of Bodrum Castle from Sea Cloud, but didn’t appreciate being so close to the nightclubs – not much sleep that night! 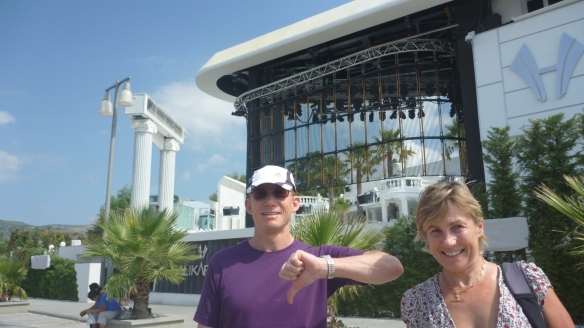 With David on his way to explore more of Turkey, we escaped Bodrum to the peace and quiet of the beautiful Catalada Island where we were one of 3 boats overnight.

We had a late change of plan, heading north rather than south. We based ourselves and the new Didim Marina so that we could explore the sites of Pergamon and Ephesus and the smaller, less touristy sites around Didim (Didyma, Priene & Miletus).

The Asclepion, on the edge of modern Pergamon, was once connected to the main Acropolis on the mountain  by a 4km long colonnaded road. It was a beautiful site, with temples, an amphitheatre and a ‘healing’ spring, now a feeding a pool occupied by tortoises.

Over the temple of Apollo, the gods turned on the first clouds we’d seen in 4 months, highlighting the grandeur of the Pergamon Acropolis, a spectacular site perched on a mountain overlooking the town. We spent quite some time searching for the wonderful temple of Zeus which has been transported piecemeal and now lives in the Pergamom museum in Berlin. All that remains is the foundation and a few rocks under two trees. (PS: Pergamon museum is a must see in Berlin)

Selcuk with it famed storks nests was a very convenient land base as it was so close to Ephesus. Our cute little hotel with its pleasant internal courtyard (and interesting bathroom sign) overlooked the stork nests perched atop the Roman aqueduct running through the town. Apparently storks nest in Selcuk each summer before their southward migration, but unfortunately had left by the time we arrived. Selcuk, the closest town to Ephesus and was surprisingly peaceful, with a good range of restaurants and accommodation. Much less hectic than Kusadasi where most people stay en route to Ephesus. 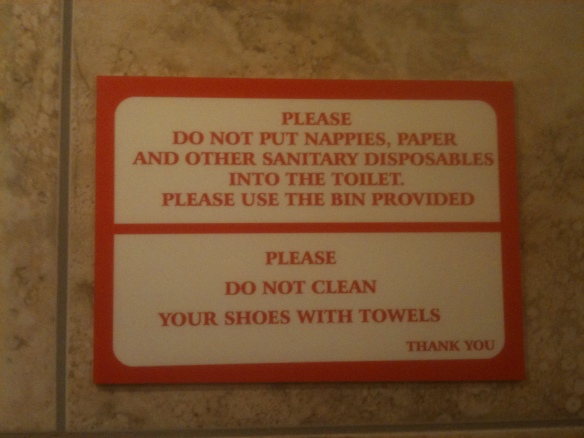 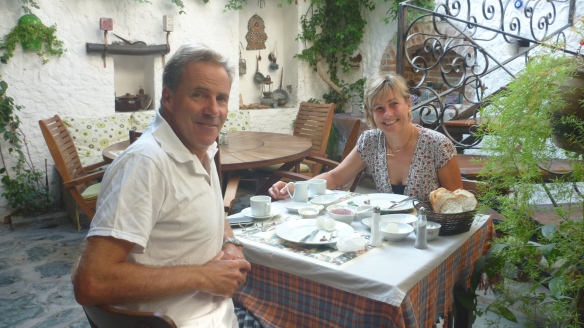 Ephesus was definitely the most extensive, but also busiest site we have visited in Turkey. Unfortunately a cruise ship had disgorged its passengers that morning. Nonetheless, this site truly incredible; very expansive with enough intact and (some say over-) reconstructed structures for one to picture the buildings and aspects of daily life here in its time. 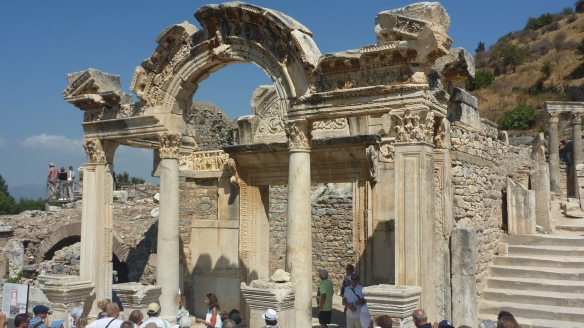 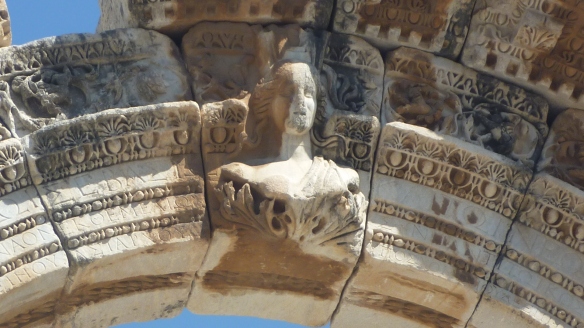 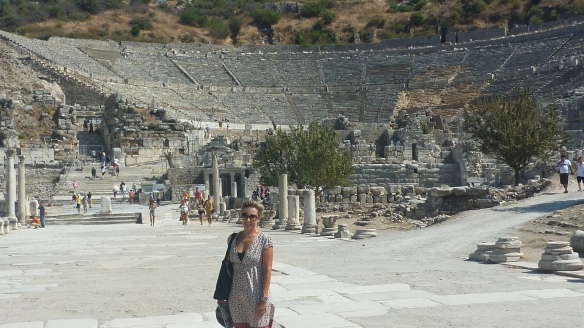 Very impressive is the covered hillside terraced houses – a glass structure (Austrian-sponsored) covering the excavated ruins of some very substantial terraced houses with surprisingly well preserved mosaics and wall frescoes. For the serious jig-saw experts, there is always a job going in order to reconstruct the marble flooring. 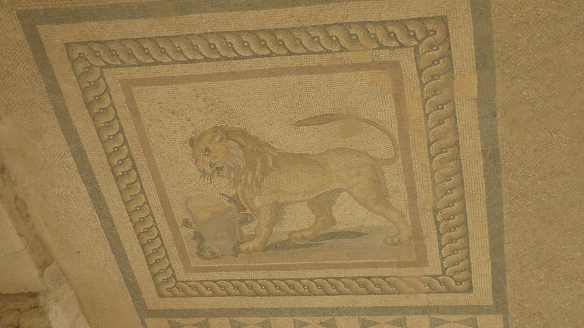 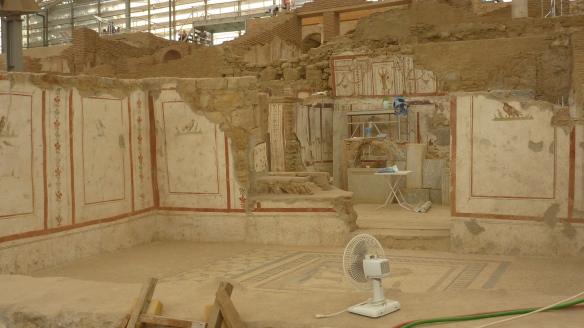 A hot and busy day exploring the site was followed by a shady lunch, a search in a carpet shop for some rugs for Sea Cloud; a final chai in Selcuk prior to the long drive back to Didim marina.