The temple of Didyma – a real surprise located in the centre of sprawling Didim amongst tumbled down farmhouses, and sheds-come souvenir stalls. A beautiful, and surprisingly huge temple, with informative information boards & no crowds. 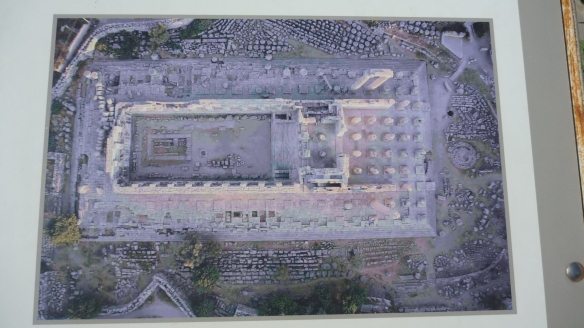 Five minutes away, the more typical signs of modern Didim and its tackiness.

Miletos, 5km north of Didim, once the site of an important harbour city now lies many miles inland within the silted river delta.

Heat and plentiful water explain the extensive cotton fields in the fertile valley – in full harvest mode in October.

Not far from Miletus is Priene, a lovely ancient site situated on a plateau overlooking the plains has a small intimate amphitheatre – note the lion’s feet carved seats (for important people) in front row. As this theatre doubled for the oratorium the waterclock ensured that local politicians kept to their time limit.

The temple of Apollo, ravaged by earthquake, is now a field of elements of the fluted columns.

Stopped at the roadside fruit and vegies cooperative stalls on the road into Didim had the most beautiful, fresh and very cheap produce, with almost all everything less than TL1.50/kg (75 cents).

The Gulluk Gulf, between Didim and Bodrum was notable for its many fish farms. Although thankfully many of the farms have now been removed from smaller bays, the green, cloudy water  in these bays is very different to the normal pristine Turkish waters. On the up side, the fish farms and the large number of white concrete box holiday homes mean that there are few boats here, so we could anchor in isolation.

Ancient Iassos was a surprise, being a much more extensive site than we had anticipated, with a large archeological team currently at work digging. 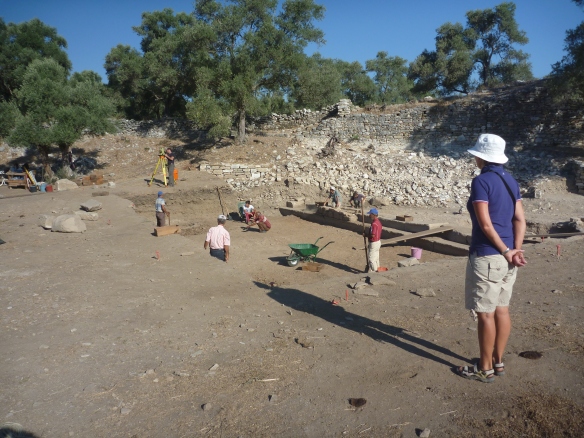 After a few days in the gulf, swimming in the crystal clear water of Catalada was a treat. We finally made it to Datca, a place we had been meaning to visit for 2 seasons. We were very pleasantly surprised by this lovely, low -key town.

The planned one day stay turned into 2, then 3 as we had to visit the nearby Eski Datca, the quaint “old” town which has been sympathetically renovated (unfortunately mostly by foreigners). 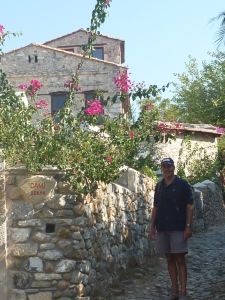 We then had to stay for the Saturday market, to stock up with some fresh produce for our last week on Sea Cloud. Datca, famous for almonds, olives, honey and teas will be a spot to come back to in order to provision.

A few hours spent with Kemal, the Turkish rug trader resulted in some new rugs for Sea Cloud.

Our last visit to Kiseli Adasi & Bozburun for the season. “Captain Paradise” dropped in on queue! 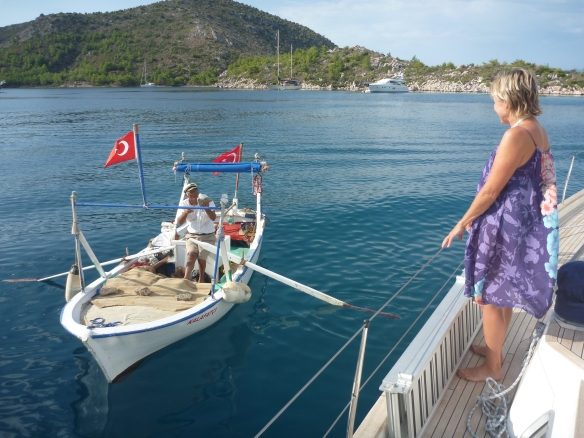 Ian educated himself in the art of rejuvenating some of the dodger’s timber with 2 part varnish – surprisingly professional for an amateur! 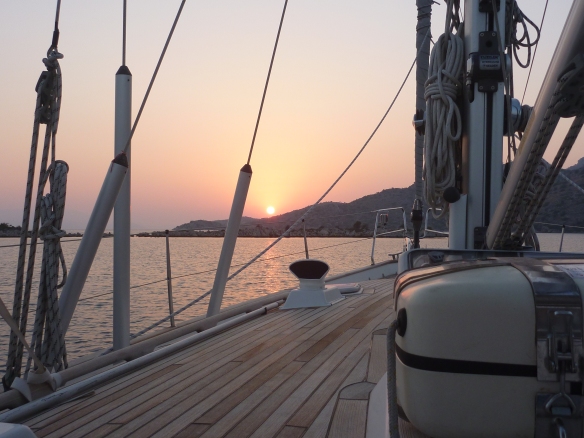 Our final days on Sea Cloud included overnight anchorages at Serce Limani, our favourite Kucuruk Kuruk (Sea Cloud only boat in the bay), and a surprisingly busy Yassica Adalari where we managed to see Emily’s 2 bunnies just after dusk. The last week was one of thunderstorms, fortunately not too windy, just short periods of heavy rain to wash the boat.

After a few days in the marina to finish the pre-haul out check list, Sea Cloud was lifted to spend the winter back in sheltered yard at Marinturk Marina Gocek. 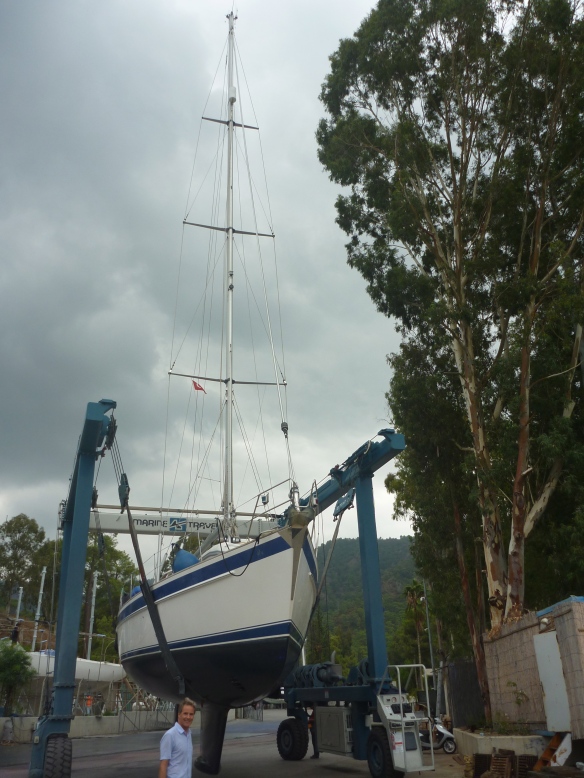 Rather than climb on and off the boat, we stayed back at Pruva Hotel, a good opportunity to enjoy Aylin and Sel’s wonderful breakfasts in their beautiful garden. 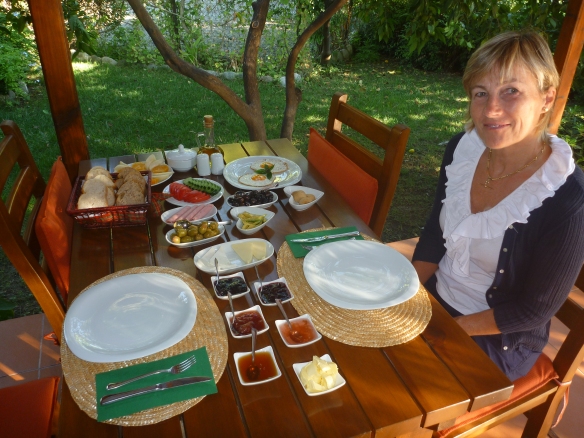 Also time for some sightseeing – the ancient sites of Pinara and Tlos, a short drive from Gocek. Pinara is accessed via a small road off the highway just north of Esen – not easy to find. The rather overgrown ruins are in a spectacular rugged setting. It is hard to imagine how the people managed to dig the large number of ‘pigeon’ rock tombs into the high, vertical rock face overlooking the site.

We managed to find the unusual heart shaped pillars and nearby penis relief on a column, part of the original temple to Aphrodite – who says the Greeks weren’t romantic?

Tlos, has many intact Lycian tombs cut into the rock face in seemingly impossible places to access; the Roman baths, an amphitheatre and remains of recent (19th C) Ottoman castle atop the hill. 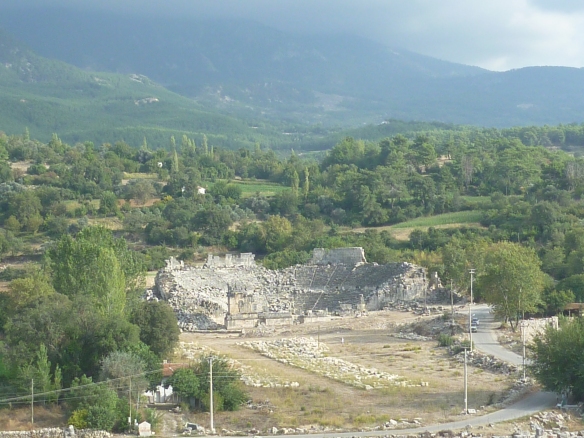 The rich, fertile farmland between the Pinara and Tlos has field after field of pomegranate trees, particularly pretty at this time of year with their colourful fruit.

It was hard to leave Gocek as the weather was still warm and sunny, with charterers still arriving for sailing holidays. Quite different from last years storm and gale force winds during our last week aboard. With Sea Cloud covered and on the hardstand we returned to jobs and families in Sydney until next April. 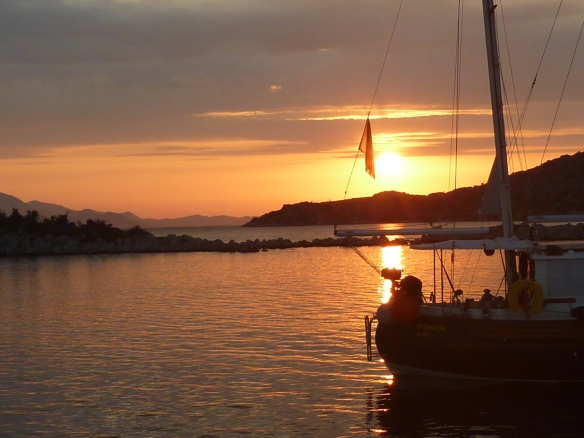