John left us in Poros where we picked up Tine and Gordon, Danish cruisers we met in Pittwater. Having sold Ansoba, their lovely Island Packet  in Australia, they are keen for more sailing experiences.

The big excitement was the arrival of our daughter, Emily who hadn’t been on Sea Cloud for a couple of years.

Emily, unlike us, loves cats. This one was pretty cute

Tine enjoyed being back in the sun 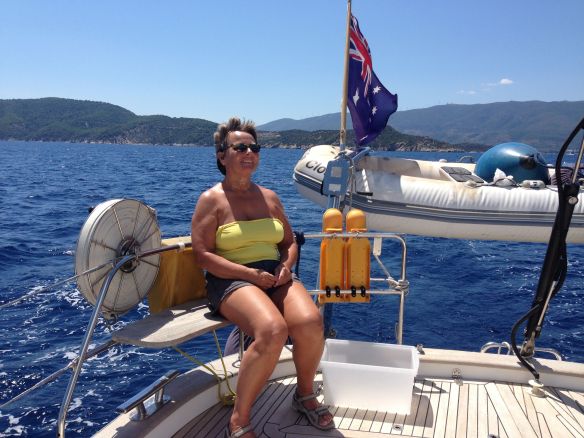 and Emily the swimming in our first bay in a small island off Angistri. It was incredible to have a bay hours from Athens all to ourselves in early July. 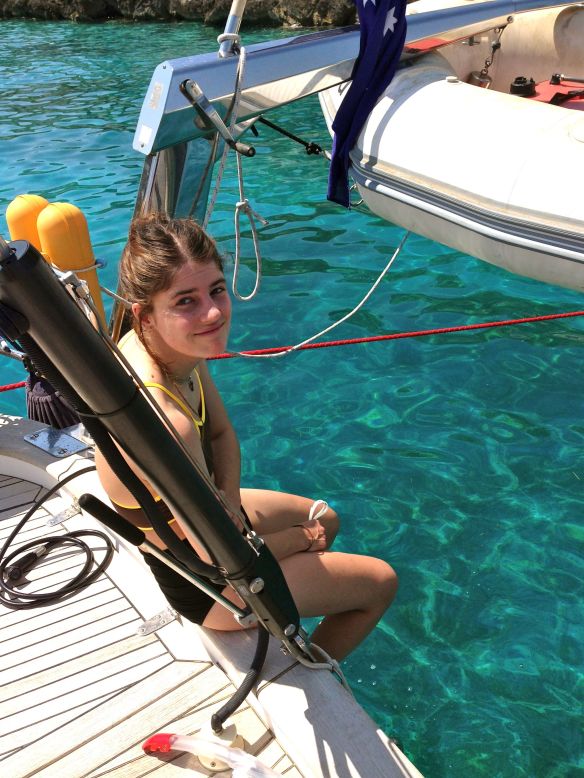 Gordon loved getting behind the wheel of Sea Cloud and helping Ian sort out many technical issues.

A sail to Epidaurus, then a tour of the ancient theatre

We anchored just off the entrance to Corinth canal, ready for an early morning start through the canal which was even more spectacular than usual in the calm early morning. 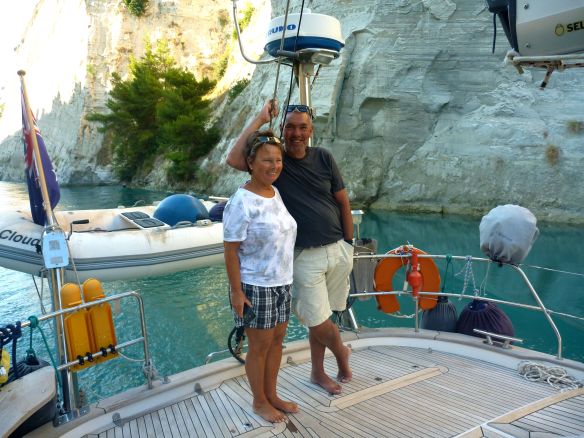 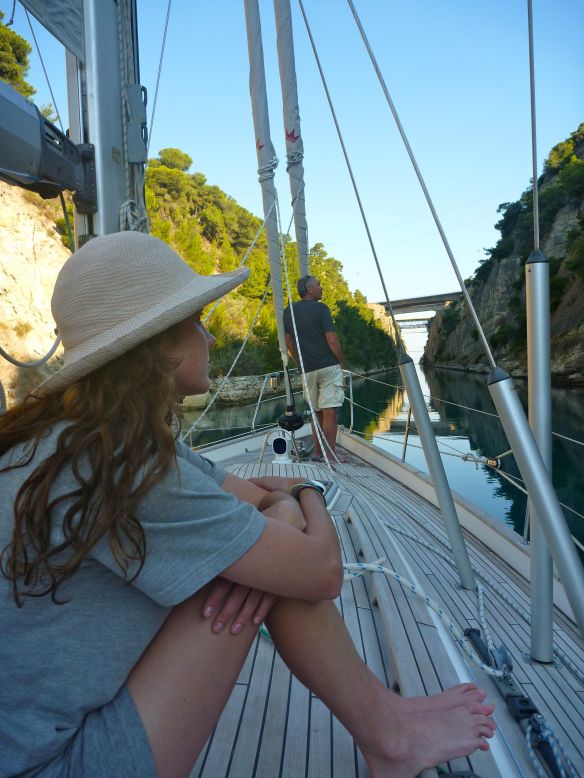 Galaxhidi was a good base for visiting Delphi and an enjoyable place to revisit. 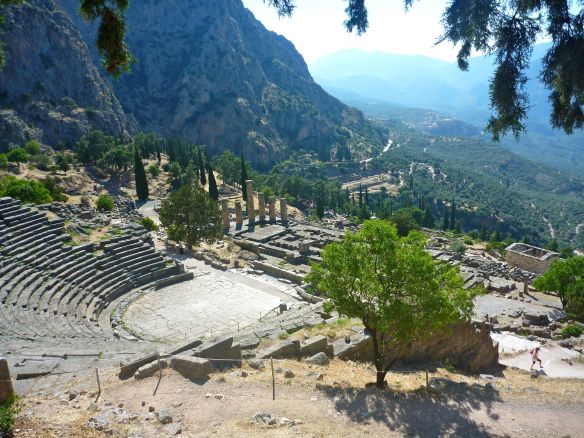 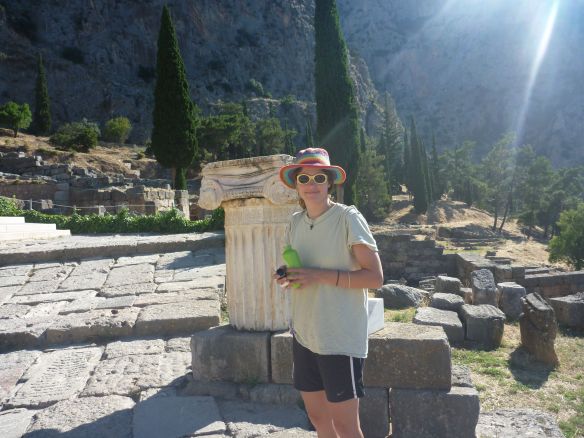 Under the  Rion bridge, 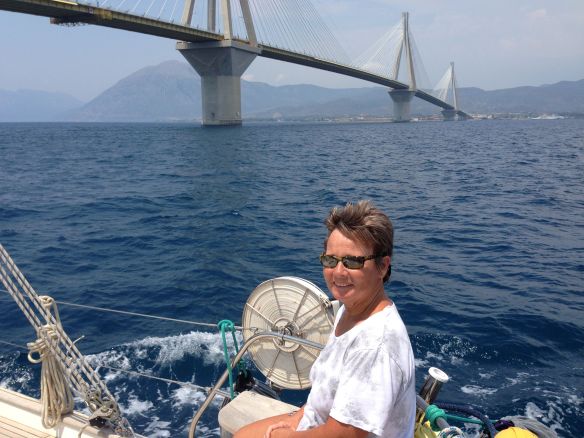 then on to Patras Marina, where we were to pick up Sam drop of Tine and Gordon. 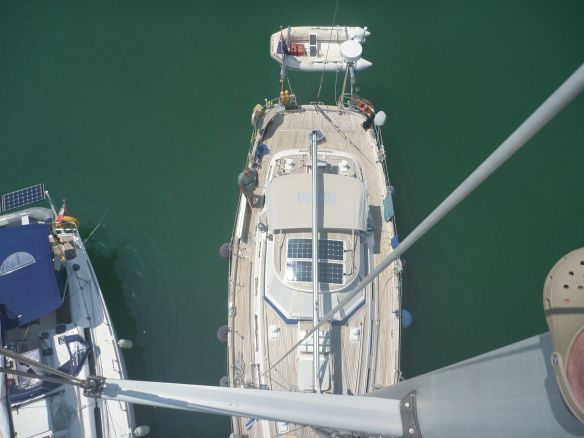 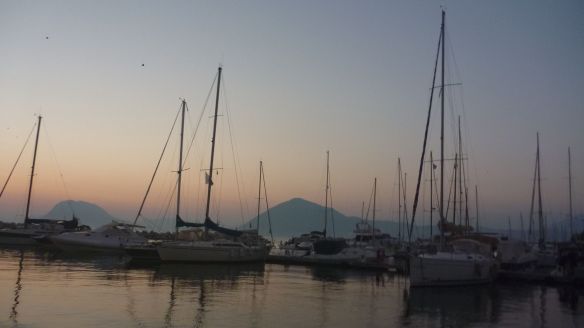 Navpaktos with Sam and Emily 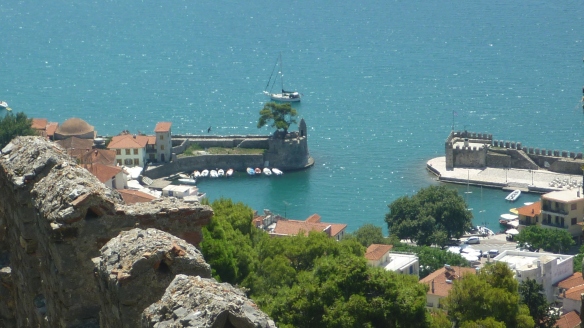 Downtown Patras was lively and attractive, with some lovely old, but many derelict buildings and many small bars

Emily and Sam headed for Istanbul, Roumania and Berlin, we spent a night chilling out at the beautiful Mare Dei resort overlooking the Ionian. It seemed very empty for mid July – but understandable as it was the week of the Greek referendum when some serious economic decisions had to be made by Greece. The owner said she hoped that the tourists would come back.. 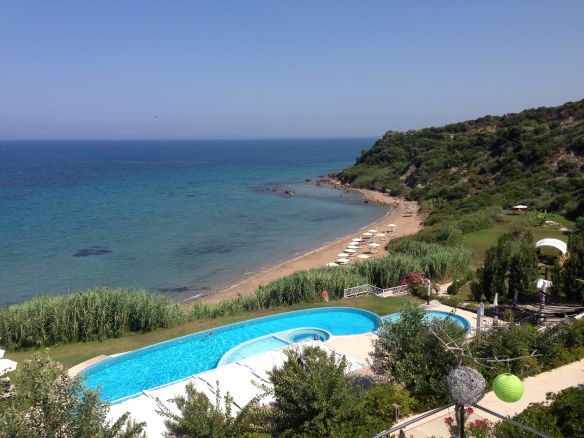 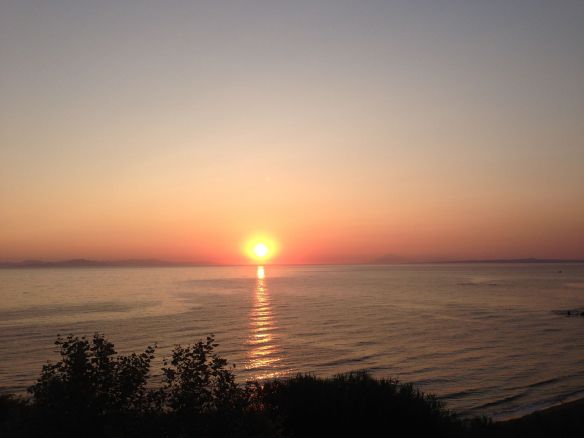 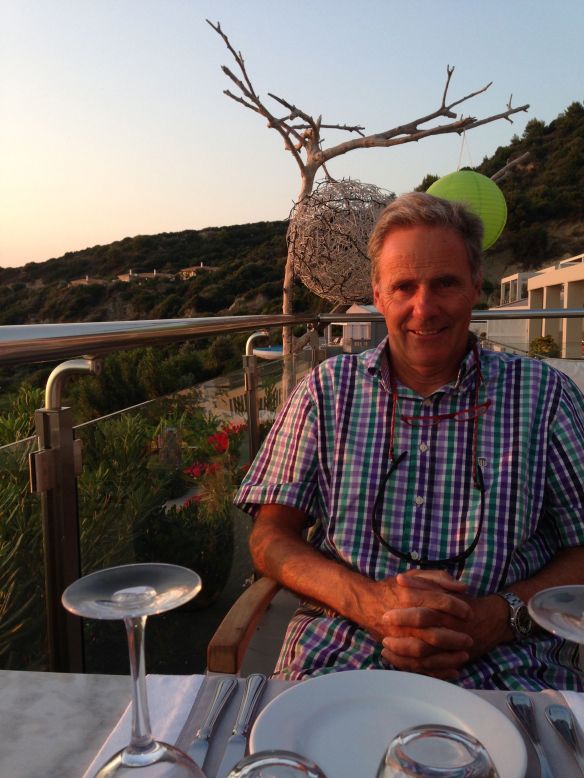 Leaving Patras, we headed back up the Ionian. The Lefkas canal was very beautiful in the early morning light.

This scene could easily be in Australia…. 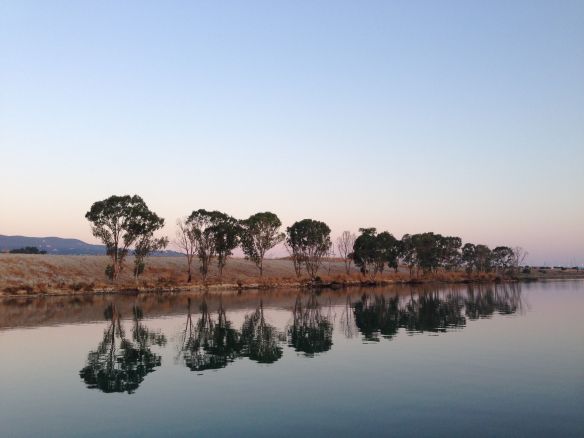 After a dawn departure from Milos and then a brisk 60Nm  sail, we made landfall at Monemvasia a spectacular town on the southeastern coast of  the Peloponnese. 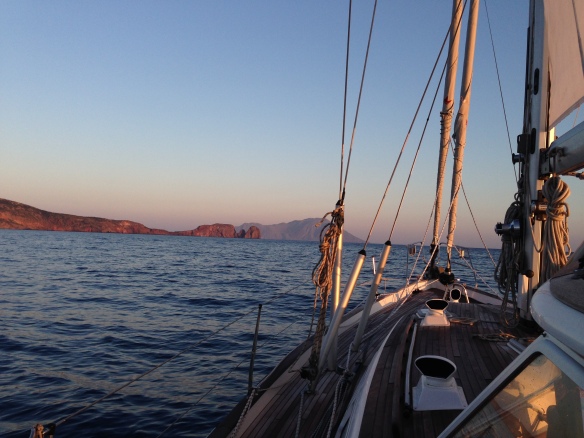 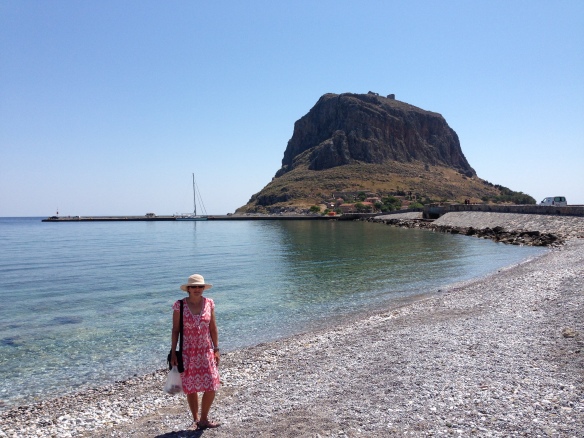 We rounded the notorious Cape Maleas in absolute calm and headed for Yithion (aka Gythion). This was reported to be a harbour infrequently visited by yachts, but a safe place to leave a boat while exploring the Mani peninsula and the town of Mystras. The harbour is currently being converted into a cruiseship port so is rather dusty, noisy and dirty. We squeezed Sea Cloud in between  a fishing boat and a small motor boat and set off to rent a car to explore the Mani Peninsiula.

This was the first place in Greece where they would not accept an Aust drivers licence, so those plans dashed and we caught the local bus to Mystras, a Byzantine town set in hills high above Sparti. 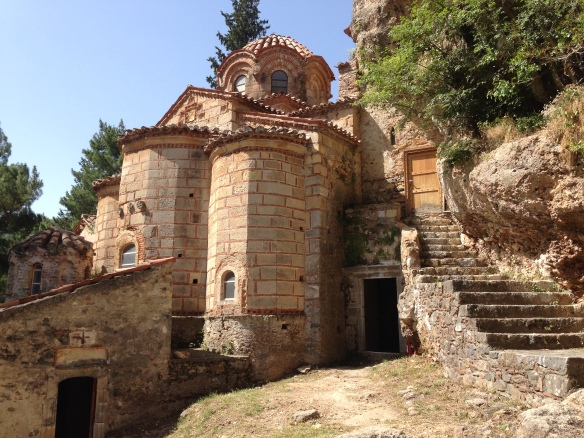 Back to Yithion for what had become our usual dinner – marinated anchovies, horta (local cooked green veggies) and grilled sardines.

A treacherous place to work – waiters have to cross the road with our dinner, and not so relaxing for us. Luckily there was the sea on the other side of our table. 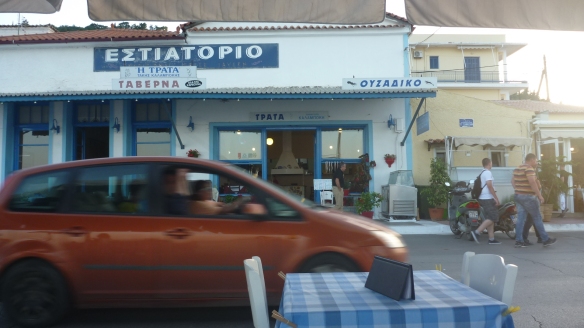 With strong winds predicted, we headed back around Cape Malea, stopping for all too short a time at the lovely Ormos Frangos, on Elafonisos Island.

Sea Cloud was the only yacht in Sabatiki a small fishing  harbour. It was beautifully calm after the boisterous sea outside. The local fishermen were friendly and the meal at the only taverna surprisingly good – a great find.

After a night at Astrous, a lovely town with a newly completed marina, we sailed to Napflion at the top of the Argolic Gulf where we met John Dent who joined us for 2 weeks sailing. The Peloponnese is a region of market gardens and fruit trees. The Napflion saturday market was one of the best we have found in our travels. Beautiful fresh fruit, veg,  and the best citrus honey Ian has found anywhere, and believe me he is always buying or tasting honey.

We managed to squeeze in a quick trip to Mycanae before John arrived – another must see ancient site in this area.

An attempt to anchor in Hydra, a beautiful island we had visited by ferry a few years ago almost ended the marriage. All we wanted to do was get out of the Saronic  (so full of selfish charterers) and back into the much less crowded Aegean.

Despite a fishing new rod (thanks to Sel at Pruva Hotel in Gocek) and reel (thanks to John Bowyer), we still have yet to catch a fish. I’m not too heartbroken as I’m not sure I could cope with blood all over the teak. Ian continues to try daily…..

Sounion, with its beautiful temple on top of the hill 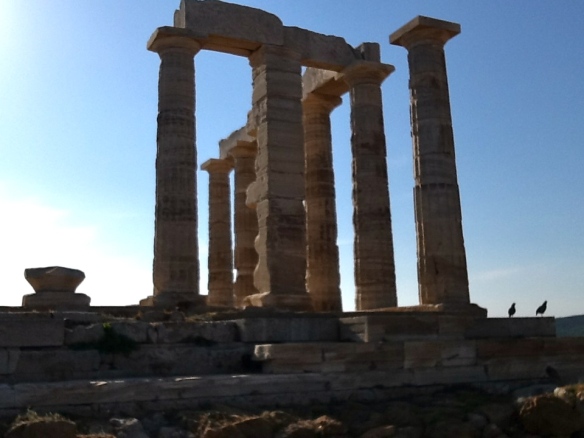 We managed to find the lion of Kea, something we had missed when visiting here with Andrew in 2009

Kea,  an important place for John (and his daughter Kea) has a charming chora

and wonderful traditional butcher, who,  not surprisingly seeing the size of his knife, was missing  half a finger… 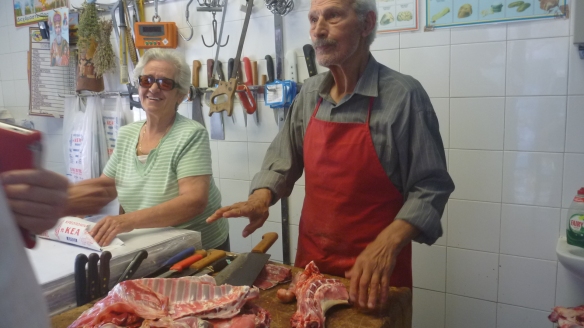 The lovely Sand Bar Bay in Kythnos, although  full of boats, was still delightful

Our old favourite bay Kavea was not so delightful as it is now a watersport centre. Having jet skis and people towed around screaming on large inflatables is not very relaxing. Luckily the high winds the next day prevented their fun and increased our level of enjoyment. 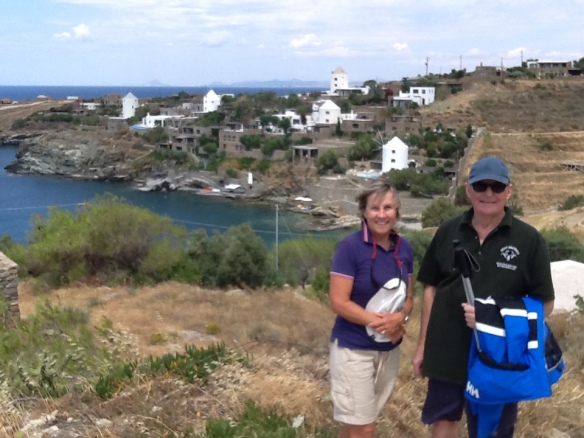 Seriphos was our last Aegean island before heading back to the mainland. 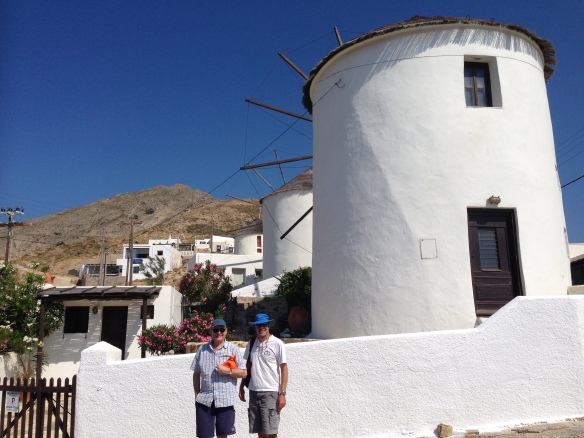 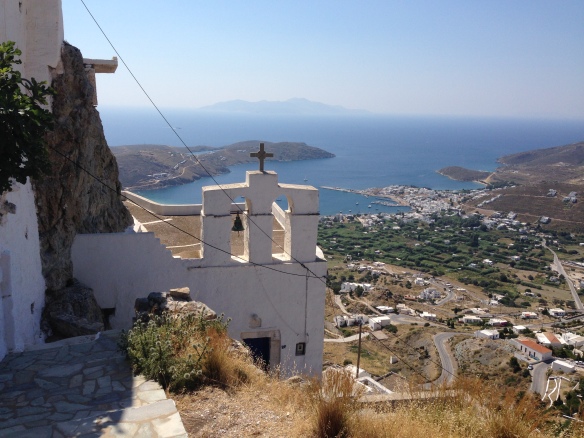 The local delivery man in the Serifos chora 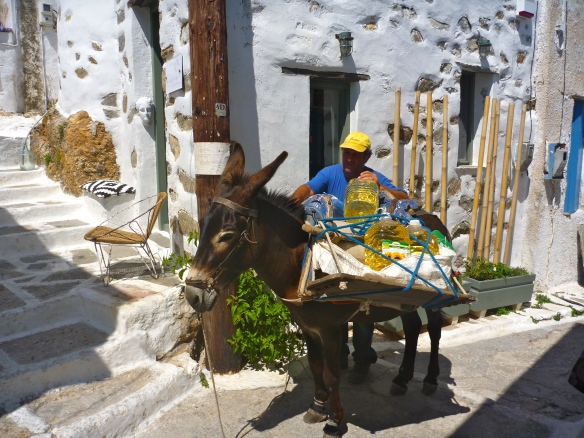 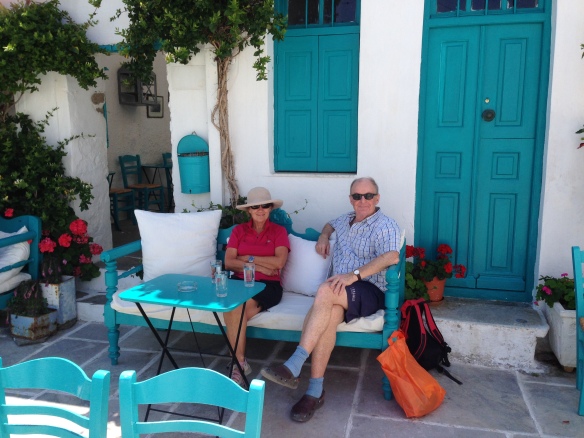 John and Ian looking pretty relaxed on our last night in Koutala bay – southern shore of Serifos – 3 boats only.