Following the departure of Pat and Sandra, we had 11 days to get to Santorini for the wedding (220Nm round trip). Sounds simple but the forecast tells us the first big meltemi for the season will arrive in the central Aegean in 48hrs – meaning we’d motor all the way to Mykonos or Paros only to sit there for 5 days in a force 8 gale. Instead we decided to spend the next week exploring Patmos, Agathonisi, Arki and then, when the high winds hit the Dodecanese, we’d wait it out in Leros and review the situation. (Winds off Leros gusted to 48kts, vindicating our decision!) 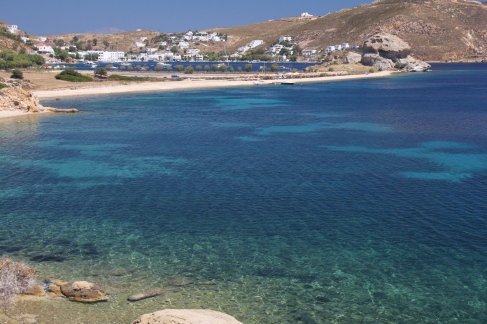 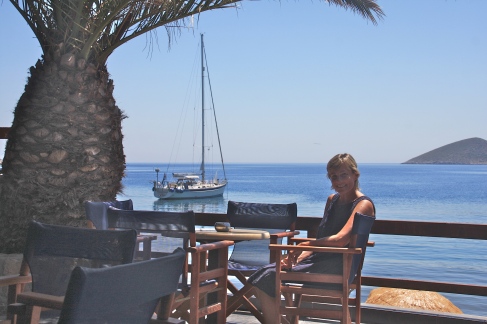 Finally, the winds between Leros and Amorgos dropped sufficiently to consider setting out on the first leg of our trip to Santorini – although we knew it would still be pretty brisk. Good sailing with 22 – 25kts (nasty little 1 – 2.5m waves with short wavelength) on the first leg to Levitha WSW of Leros.

Levitha anchorage is only 50m across, long and narrow with 12 laid moorings in 2 parallel lines – those furthest in to head of inlet only in 2m of water, but even those in 3-4m looked horrifyingly shallow as we headed up the “alleyway” (only a couple of boat lengths wide) between the moored boats with 25kts of wind behind us. Manoeuvring in this tight section was very difficult because Sea Cloud’s turning circle grossly exceeded the space available! Managed to get in, a goodly collection of boat hooks clearly visible on the bottom says that we’re not the first to have a couple of shots at this!

Levitha is a tiny windswept island owned by 2 families, one of which runs a small taverna for passing yachties, and has hundreds of goats and sheep searching for occasional scraps of vegetation. Cathy heads for the taverna up the hill and gets an inkling of what’s on the menu.

Next leg Levitha to Ios passing south of Amorgos (60Nm). Probably a good thing we couldn’t get forecast update (no internet on Levitha) as a Force 8 gale came up late morning – by which time we were well on the way to Ios. Nonetheless, we’d known for days that he stretch from Levitha to Amorgos was going to be pretty hectic with strong winds and wave heights > 2.5m predicted. Wind strengths averaged 25 – 33 kts with gusts to 38kts. Once west of Amorgos we should have been through the worst of it – instead the wind increased further to constant high 30’s as we approached Ios. Sea Cloud handled the challenging conditions throughout day beautifully as we thought she would but had never seen her do it!

Finally anchored in Manganari Bay on very southern tip of Ios in 33kts. “The pilot book says right here that this bay provides “good shelter in a Meltemi” – why is it blowing 40kts?” asks Cathy. Wind continued to howl with gusts up to 40k till around 3am. Managed to sleep like babies knowing our anchor totally buried in sand, with anchor alarm on and with miles of open sea to leeward! 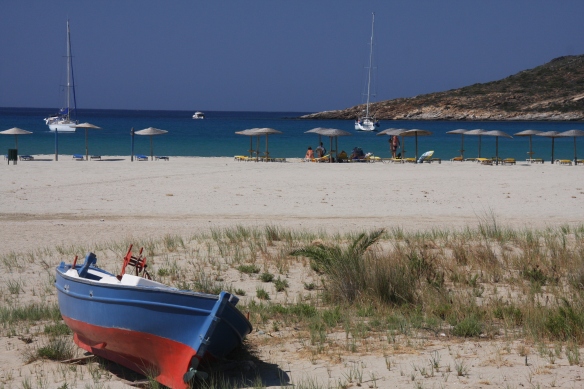 Took the opportunity of a brief break in the wind to get ashore, stretch the legs and have a swim on a lovely sandy beach followed by a hearty breakfast at the local beachside café. (The blue fishing boat in the foreground was blown up there in a southerly gale 4 weeks earlier!). The weather forecast predicts the meltemi to continue for next 24hrs at least – sure enough it was blowing dogs off chains again by midday and throughout the night.

Arriving into the caldera of Santorini under full sail – a very exciting moment!

The sheer grandness of it all towering above us and the myriad white washed houses along the ridge line hundreds of metres above us was spectacular. 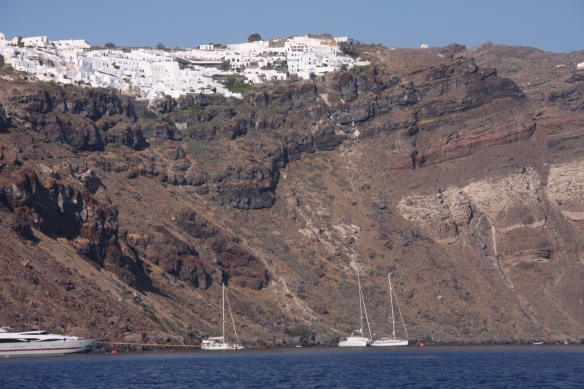 Where/how to anchor in a volcanic caldera 300m deep in the centre? Getting a secure anchorage in Santorini can be a challenge. We’d phoned the harbour master who advised the weather had prevented the dredging of the sand bar at the entrance to the small marina on the south coast. With depths of only 1.8m that was not an option. Inside the northern tip of the island, off the hamlet of Oia, we found 10 substantial looking moorings – about 6 clearly for commercial use and/or occupied. We first picked up one vacant mooring in 10m of water but after diving on it I was horrified to see not chain but rather 6 frayed lengths of rope that had been successively added to over time. Additionally, the top shackle had half rusted through and the bottom end of the ropes disappeared into the depths rubbing & fraying over a sharp volcanic ledge 8-10 m below!) Quickly moved to another very large mooring in 30m with very substantial chain in good nick. Unfortunately couldn’t dive deep enough to get a look at the bottom, but felt pretty confident it was OK and verified this with local tour boat operator. 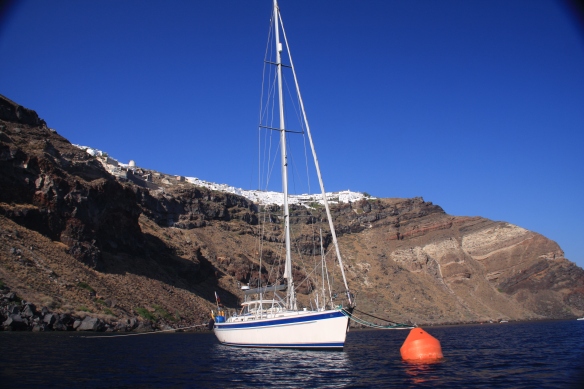 Time was slipping away and we have to get to the wedding – next problem – how to get up several hundred meters to the top of that cliff? Not as easy as it sounds as the usual steep switchback track collapsed last year (landslide left of picture) killing 2 people and their donkey so the track is now impassable.

Smugglers cove: We threw some glad rags into a back pack and took the tender around the north corner towards Ammoudi Bay – just south of which was a small “smugglers” cove –surprisingly calm considering its relatively exposed location. Dropped Cathy and the bags ashore on the rocks, chained the dinghy to one of the lines presumably used in calm conditions by local fishing boats – sufficiently far from the rocks to avoid damage to the dinghy and outboard amongst the swell. Swam ashore (with fingers crossed the dinghy would be in one piece upon return!)

Ammoudi bay looking up. Still running late and how to get up to the top to meet Suzie and Paul? 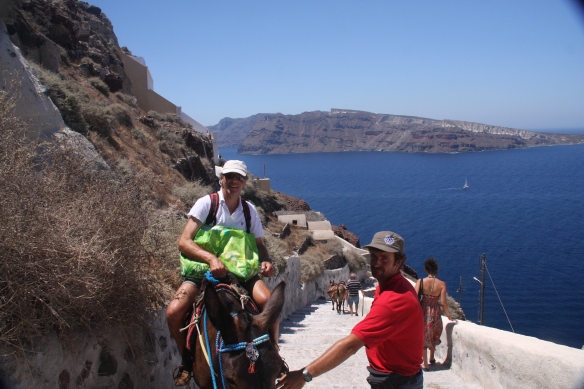 …… by donkey of course! It’s the best 5 Euros you’ll ever spend skipping up to the top on a frisky donkey as he lurches around the edges rubbing your legs against the wall and giving you a more than ample view of the precipitous drop below you! 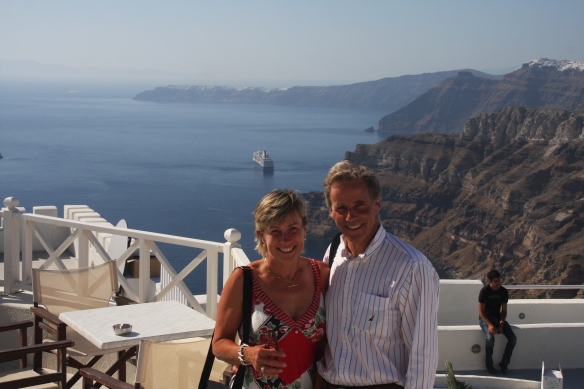 Ellie and Merv the proud father of the bride

Three of the many divas attending the wedding – Annabelle and Suzie Tait with Cathy set off the classic Santorini afternoon. The reception followed at the Wave Bar on the south coast at Vlychada beach. In typical Greek style, music and dancing kicked on till dawn. 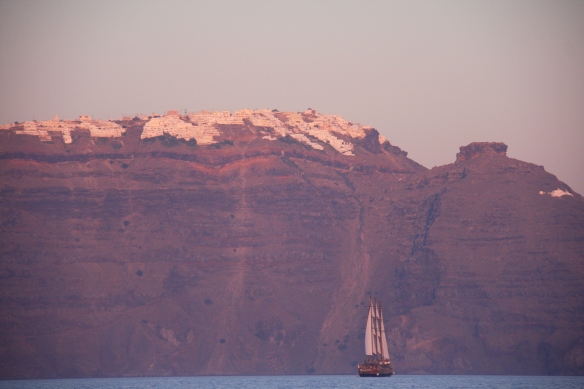 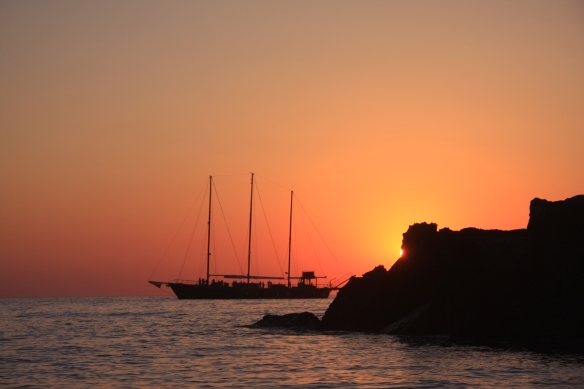 The day after the wedding and post-wedding after parties, back to Sea Cloud (boat and dinghy all in good shape) in time to take in the sunset into the Aegean followed by some R&R, sipping a Campari soda on Sea Cloud lying peacefully at anchor while contemplating the amazing events of the past few days.

Farewell to Santorini as we sailed south across the caldera in the early morning light. Once out of the caldera it was a 64Nm sail NE to Astipalia on a beam reach in 11 – 16kts.

Arrival in Astipalia – spectacular chora and fort on the hill overlooking the harbour.

Astipalia harbour – spectacular for its complete lack of organisation and disinterest from port police in the daily anarchy; half closed for repairs; small craft in deep sections of harbour; power and water on the opposite wall to the boats etc, etc. Examples of Med mooring displayed here were off the idiocy scale – even Cathy was on the bow gesticulating. High point for the evening was rescuing a cormorant from drowning – freed it from a fisherman’s net left lolling in the water while the bird bit little holes in Ian’s fingers.

The line of windmills right through the middle of town gives a clue to the fact that strong winds blow in Astipalia nearly constantly. 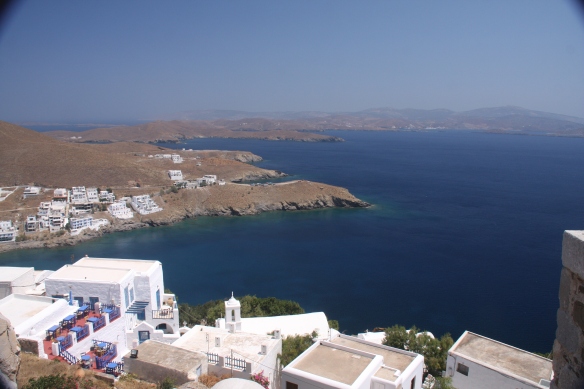 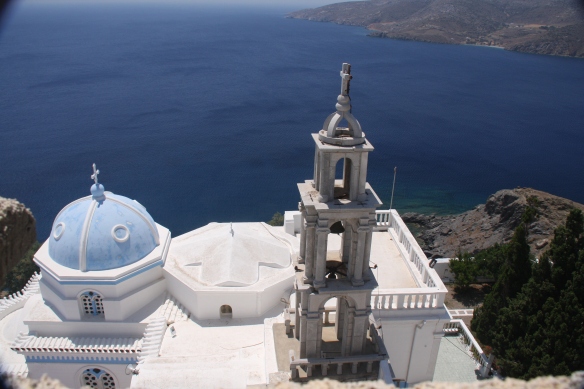 Walk up to the chora and fort provides wonderful views of the coastline of Astipalia. 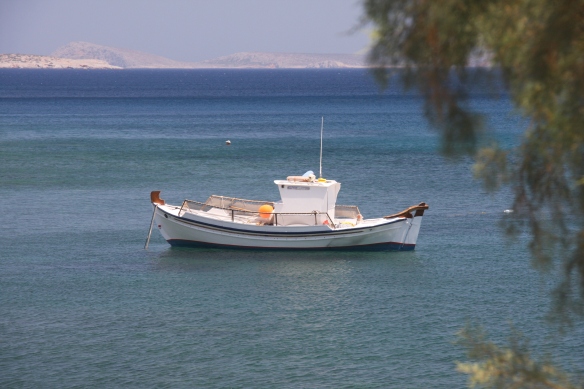 Sailed from Astapalia back to Leros (46Nm). Pandeli Bay has become a bit of a base in recent weeks – with the best Mojitos in the Dodecansese – why not?