We thought we had picked a good  weather window for the sail to Mykonos. We set off from the north of Patmos at 4am and had a great sail across to Mykonos with Sea Cloud flying along.

All went well until we turned north into the channel between Mykonos and Delos to find we were in Bondi –like surf and had 37knots on the nose. Not fun.

Sea Cloud behaved well and after a pretty scary hour we tied up on a lazy line in Mykonos Harbour. Phew!! Should have taken more notice of the sea state off the island – you don’t want to be anywhere there is red or yellow…

It was great to catch up with Sue and Ian Rewell, who unfortunately were leaving the next day for Paros. 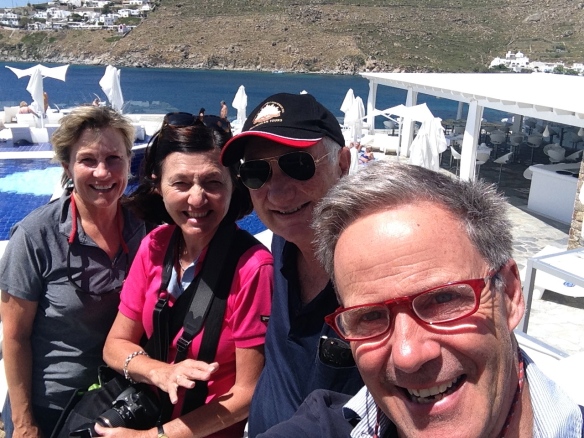 It was very tempting to head south with them, but we wanted to take advantage of the winds and head to Tinos and Andros, two islands we had been hoping to visit for a few seasons.

They don’t call Mykonos the windy island for nothing. 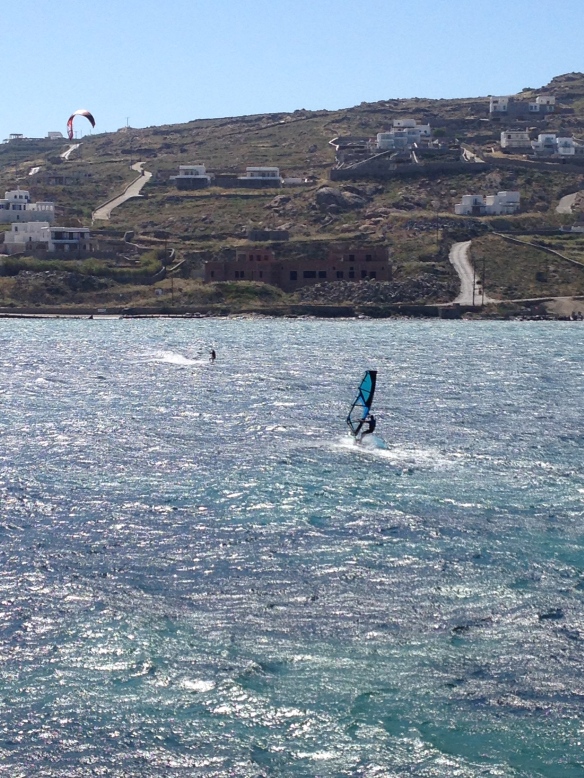 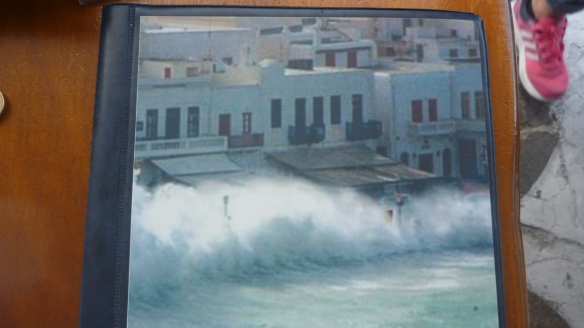 The old days (taken from a restaurant menu)

Unfortunately Mykonos  is a cruise ship destination – 4 ships in port =11,000 people in town. It was so peaceful when they all left. You could tell that this punter was a charterer, why would you anchor so close to the rocks in a 30knot breeze? Close to the restaurant I guess. 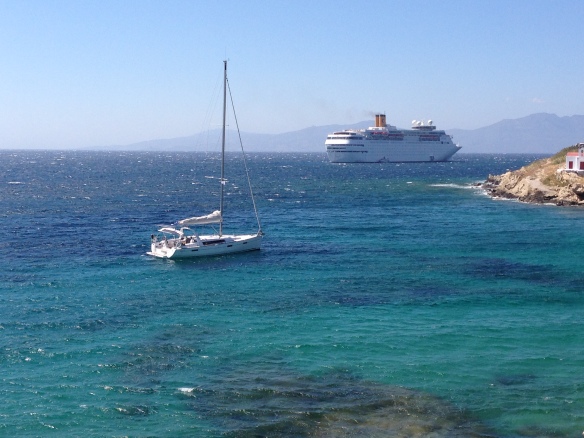 You can see the attraction of Mykonos, it has beautiful beaches on the south side of the island. 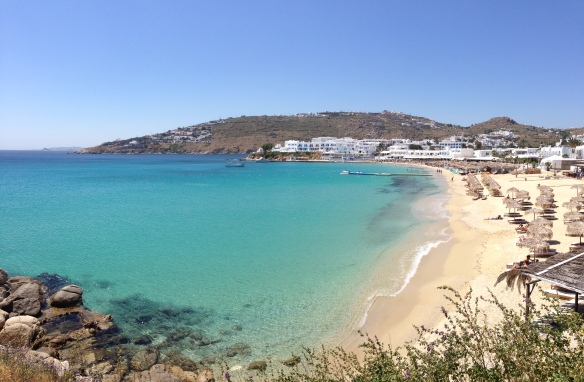 The wind, which had been blowing furiously for a week finally stopped giving us the opportunity to visit the ruins of Delos, the commercial and religious centre of ancient Greece. 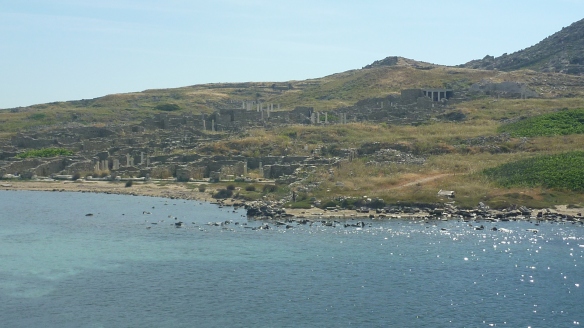 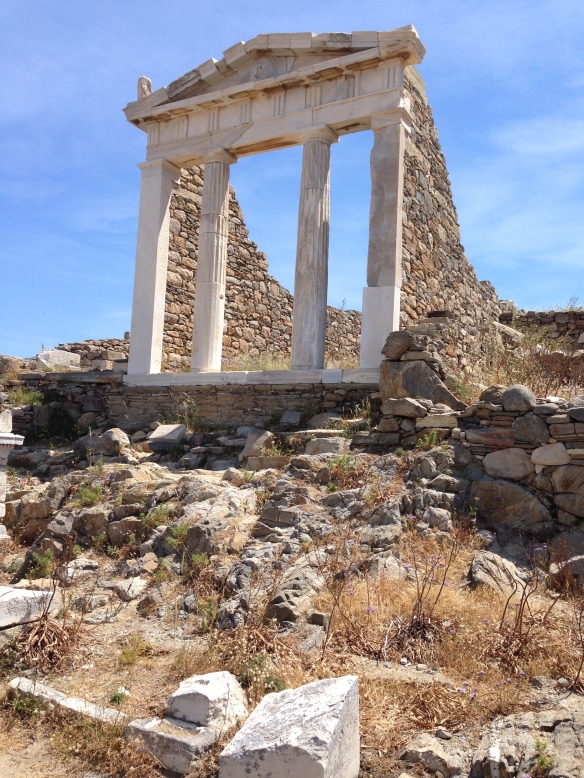 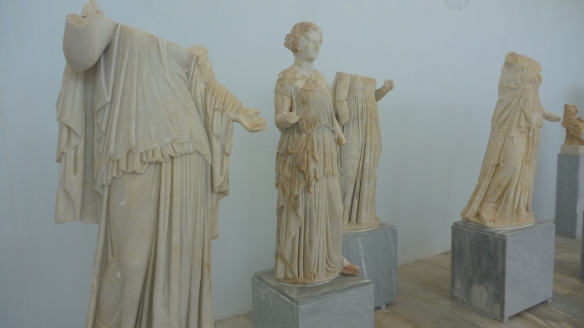 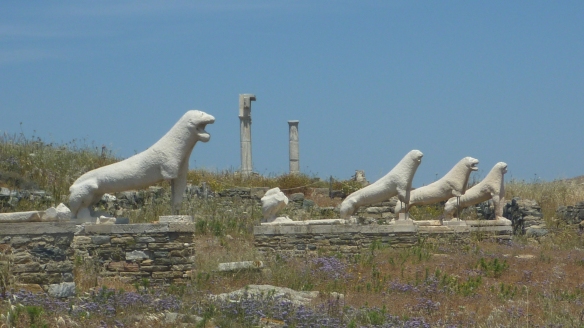 Mykonos looked so different in the calm.

Lunch in Mykonos overlooking the windmills with the beautiful people. 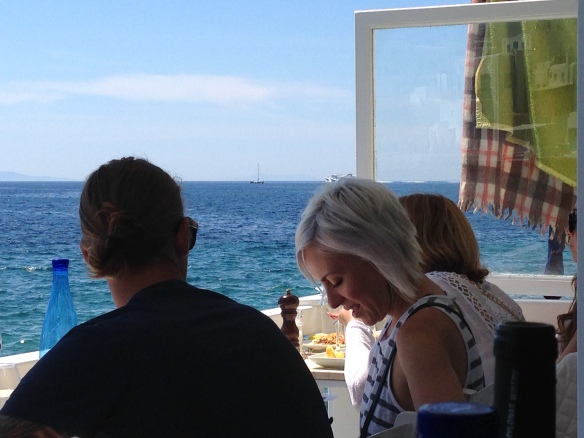 The resident pelican, seen pottering through the small streets of Mykonos. 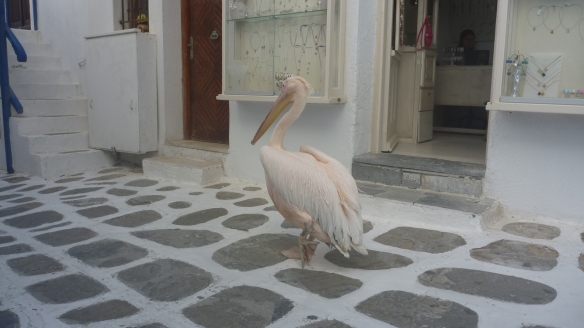 On to Tinos, a modern day religious centre of Greece. It is famous for the pilgrims who crawl from the port up the street (carpeted) and up the stairs of the Church of Panagia Evangelista on the hill. 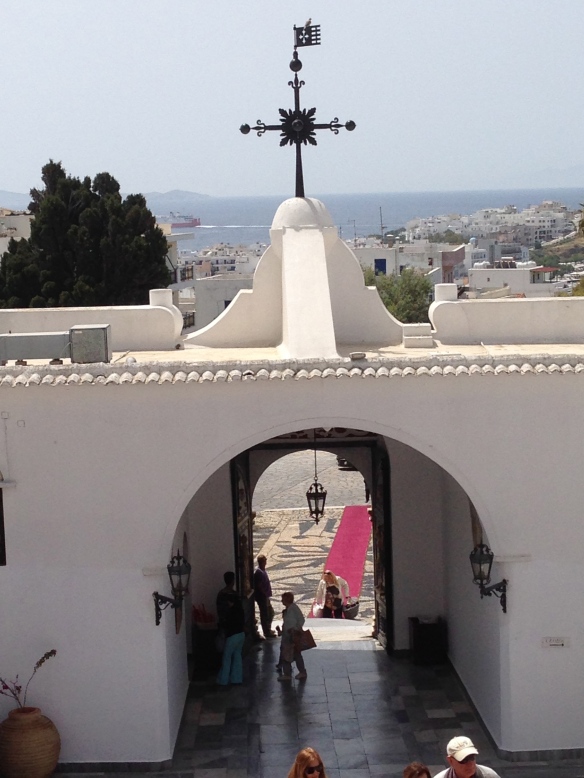 There were many shops selling goodies for the pilgrims, seemed that the more religious you were, the bigger the candle purchased.

The island is also incredibly lush and beautiful, with lovely small white towns scattered throughout the hillsides. It is also known for the large number of dovecotes, some dating back to Venetian times. A more recent addition to Tinos is a great museum of marble located in Pirgos. 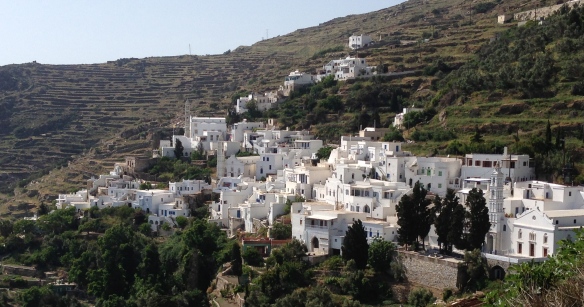 Visiting these towns at this time of year is great, no problem getting a berth – there was only one other boat (another Hallberg Rassy) in Tinos.

From Tinos, to Andros, another windy island, the closest one to the Greek mainland. The harbour of Batsi where we moored was a pretty place. Andros town, the capital of the island has a big harbour, but on the windy side of the island. It was calm the day we visited, but would be a terrible spot to be with the meltemi blowing.

Kavea Bay on Kea was our next anchorage. We’d spent 4 days in this bay in a big blow on our first foray into the Aegean. It was lovely to see it in the calm and to be able to go ashore and wander around. Kea, with its small crystal clear bays and sympathetic cycladic architecture is on our short list of ideal Greek islands. 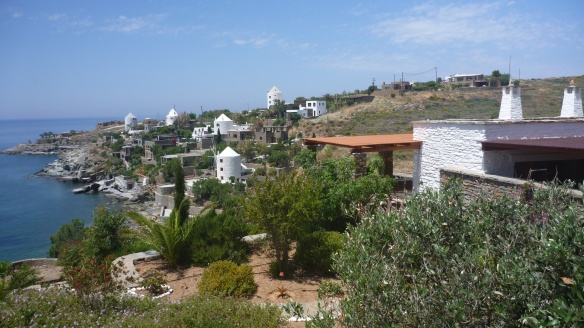 Anchored in the bay at Finikas, Syros, we caught the local bus to the island’s capital, Ermopoulous. It is the capital of the Cyclades and was also briefly considered as a potential capital of Greece.

It has a very grand main square and Town Hall and some charming small streets. Ermopoulis harbour is a large working port, busy with ferries and yachts. Ian managed to have a stainless fitting fabricated, the only problem was that by the time they finished it, we were in Paros, so had to sail 25 miles each way to pick it up! 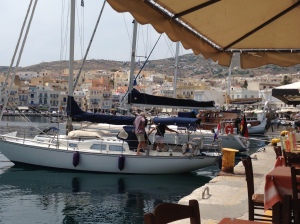 A planned 2 day stay in Paros turned into five, such a lovely spot. The wonderful large bay at Naoussa is a perfect all weather anchorage.

There is also a busy small marina, which was full most nights. The town is charming, with small winding streets, a pretty small harbour and restaurants with great grilled octopus. 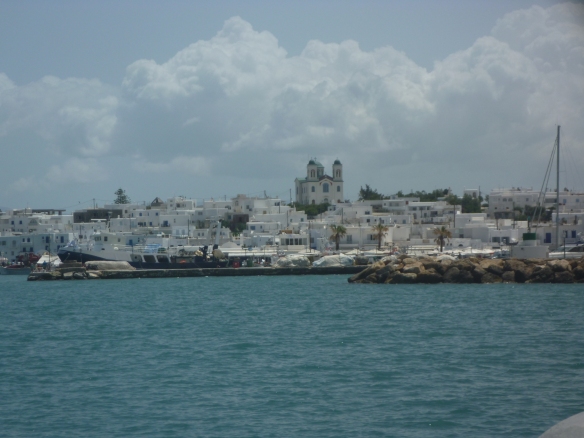 After a busy few months in Sydney we arrived back in Gocek to find Sea Cloud looking beautiful , shiny and ready for launch.

After three seasons wintering in Gocek, the plan is to head west through Greece, to leave Sea Cloud in Brindisi. After  a  wonderful sail we docked at Netsel Marina in Marmaris, ready for a few days of tradespeople crawling over the boat, doing the many ‘jobs’ Ian had lined up with Erdan from Marlin Marine, Ali from Elvstrom sails and Rashid from Anil canvaswork. 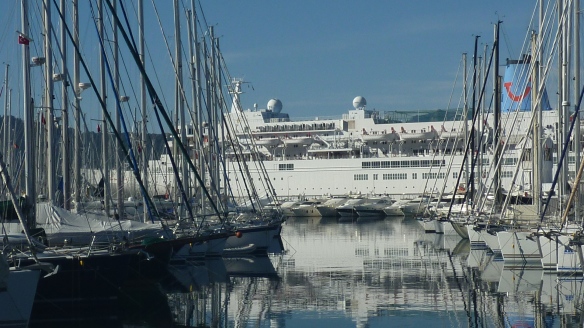 Sea Cloud now has solar panels (sort of – still not working properly), a new genoa, a furling staysail and a great new bimini, that actually shades us when at the helm. Our guests will be pleased to hear we also have a new electric toilet. Ian made sure he took all the working bits from the old one before disposal!

The more time we spent in Marmaris, the more we enjoyed it. Out of season, Marmaris is rather charming, a busy, ‘normal’ Turkish town, with some great restaurants, and to Ian’s delight, a terrific range of chandleries. 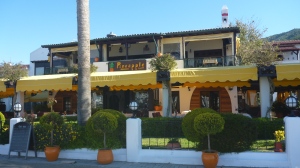 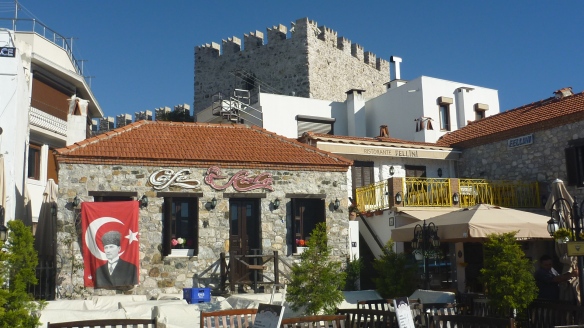 Apart from the bi weekly cruises ships, the usually busy Marmaris Bay was quite empty.

A sail to Selimiye and Bozburun were great opportunities to try out the new sails. 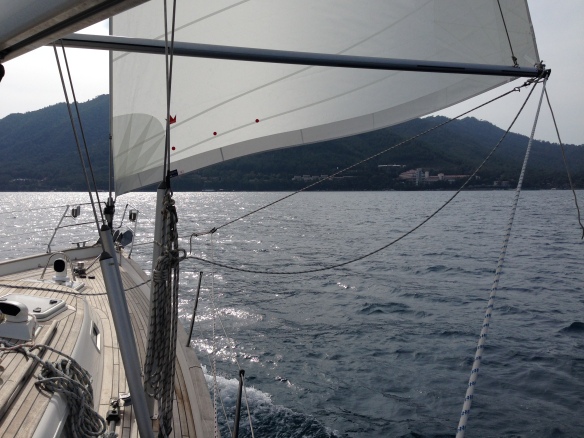 Being late April, most of Selimiye was in preparation mode, with many restaurants closed. Luckily, Sardunya with its great restaurant and lovely dock were open. 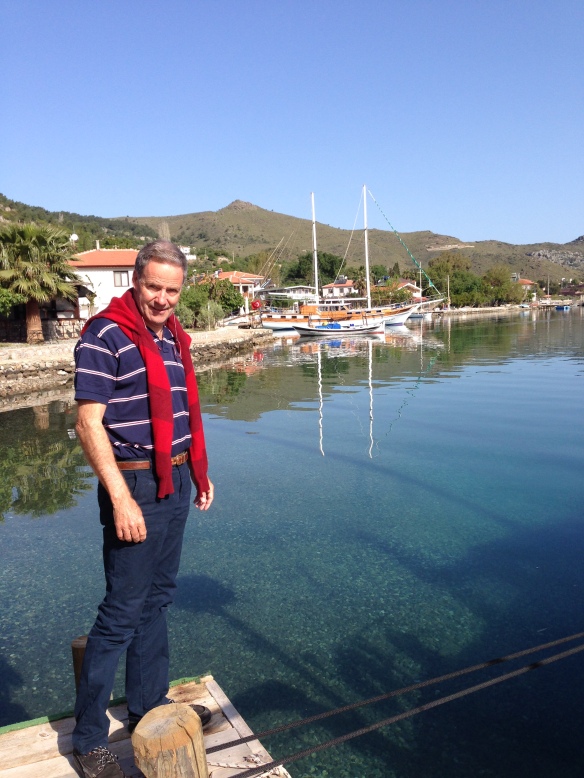 After visits to our favourite anchorage Kiseli Adasi and nearby Bozburun we returned to Marmaris for some more rig tuning and to check out of Turkey. Always feel sorry for the sheep in the boats! 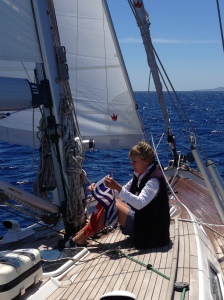 Nicolas at Navigo yachting helped again in  finding a berth for us in Mandraki Harbour in Rhodes. The new Rhodes marina which they hoped to be completed for this season is still being built – maybe opening in June 2015. Ian’s birthday was celebrated with an amazing seafood dinner at a local restaurant recommended by Nico. 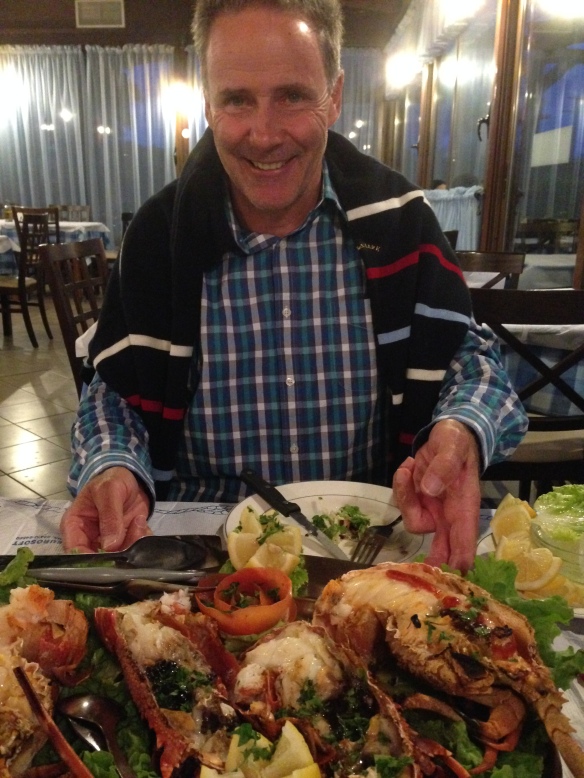 Symi harbor as usual was lovely, but a challenge. Fortunately it was a calm night –the charterers on the other side of the harbour had out enough anchor chain to barely touch the bottom of this deep inlet.

We moved quickly north, trying to catch up with our EMYR rally friends on Skysong, Michael and Christine who were in Lipsi harbor. We spent a memorable few days with them in Lipsi and then Leros. They are great company and we enjoyed stimulating conversation, lovely food, wine and of course, pink gins! 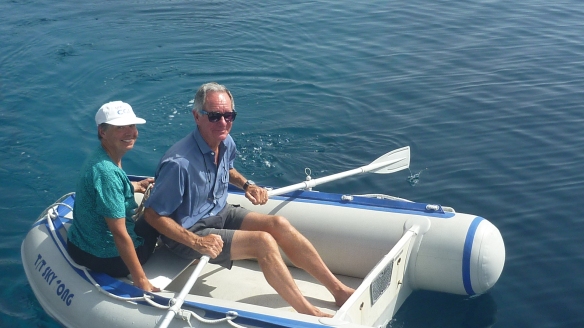 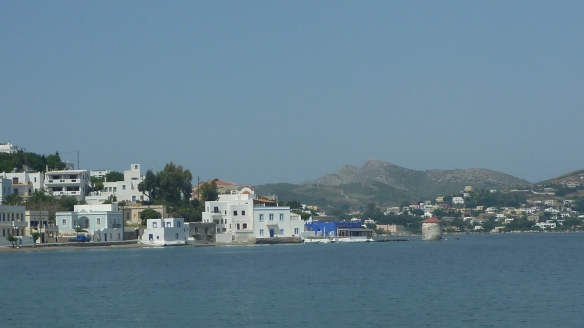 First swim of the season – Pandeli

Michael and Christine left us here in Xerokambos, at the bottom of Leros where we are anchored, trying to work out how to get across to Mykonos or Paros to meet friends Sue and Ian Rewell – not easy with a winds and big seas separating us! It has been very windy this season, with more strong northerlies this early than in previous seasons.